This post will teach you how to use the Confluent Python client with Simple Authentication and Security Layer Mechanisms (SASL)/OAUTHBEARER security protocol to produce and consume messages to topics in Apache Kafka and use the service registry to manage the JSON schema.

You can also use service accounts in SASL/PLAIN over OAuth, which solves the secret rotation problem. In Figure 1, you can see both flows. At first, it takes 4 round trips to make a connection, whereas in OAuth over SASL, the client makes a token request to the authorization server and sends the token to the Kafka broker/resource server, which is efficient and reduces the blast radius with fewer hops. For better understanding of thread model and risk, refer to OAuth 2.0 Threat Model and Security Considerations. 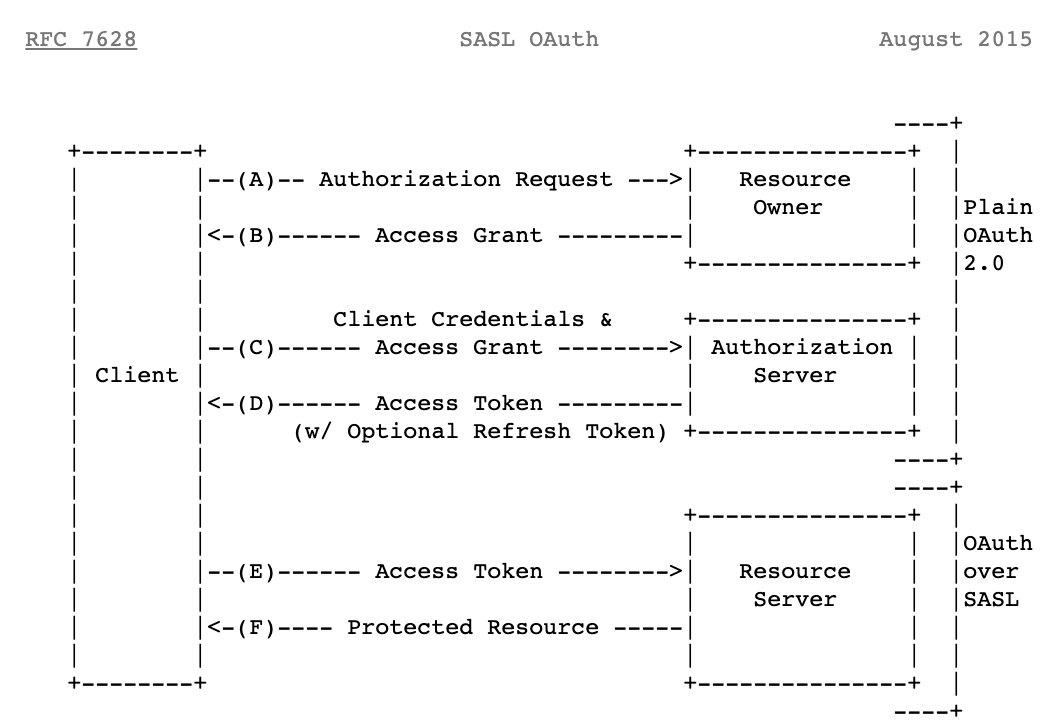 Figure 2: Using Python client producer/consumer to publish a message to a topic in Apache Kafka and using service registry for serializing/deserializing messages.

Let's go over the setup in detail involved in creating an Apache Kafka instance, a service registry instance, service accounts and topics in Kafka, granting permissions to the service account, and finally, configuring the Python clients.

Create a Kafka instance and login into the RedHat Hybrid Cloud Console. Select "Stream for Apache Kafka" under the Application and Data Services catalog. Click on "Kafka Instances." In Figure 3, you can see I already created an instance with the name kafka-instance. You can use any allowed name.

Once the status appears in a ready state, click on the kebab icon (three vertical dots) to view the connection details, as shown in Figure 3.

Copy the Bootstrap Server URL and create an export for it or copy it for later use, which can be used for running the producer/consumer client.

Now, click on the "Create service account" button to create a service client id and secret. Use the service account clientId and secret. You can retrieve an access token by making a client credential grant request to the authorization server, which is Red Hat SSO, in this case. 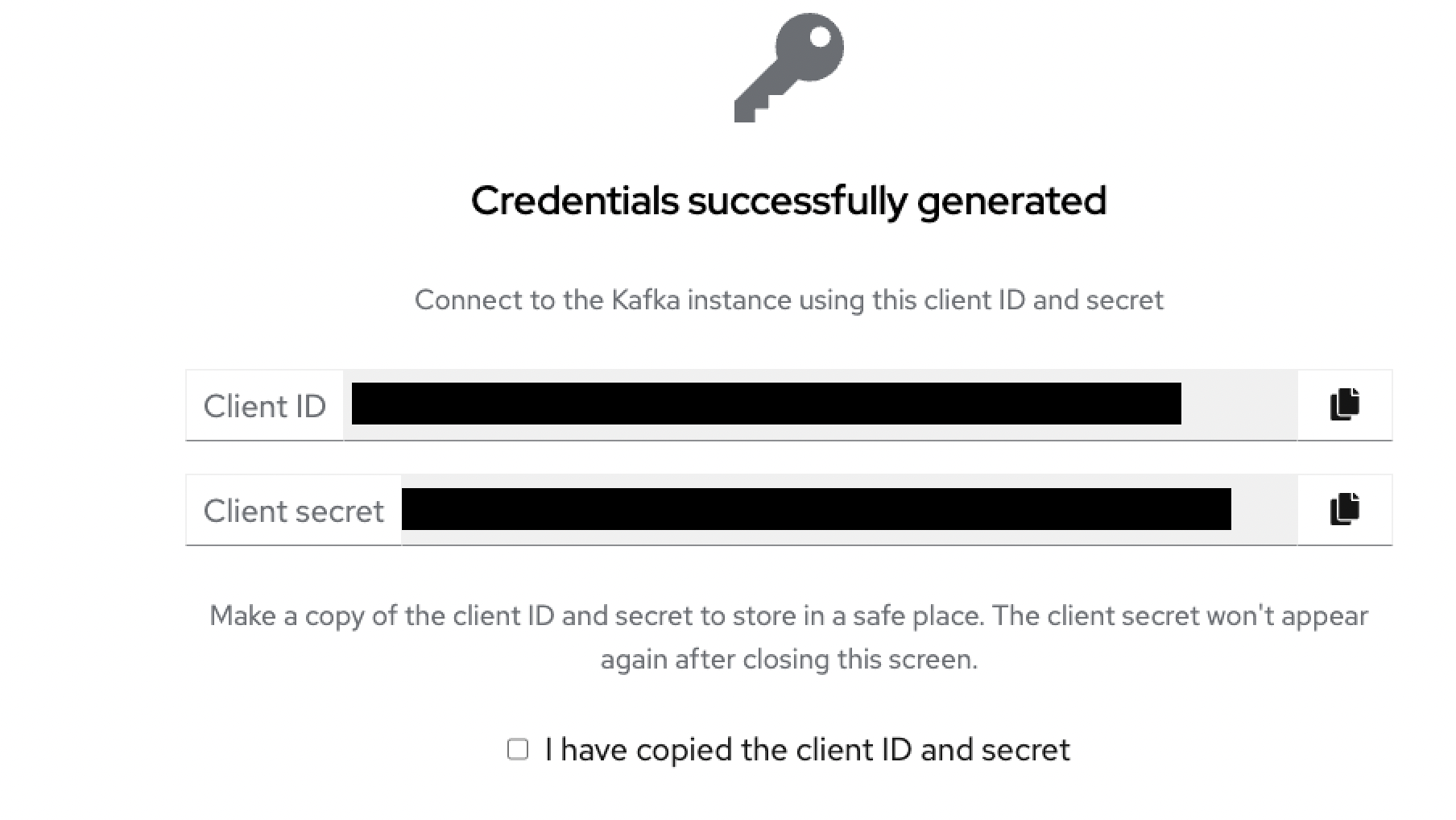 Navigate to the Kafka Instances section, and click on the instance you have created. Let's create a topic. In Figure 6, I have created a topic with the name "test." You can pick any preferred name.

Let's create a service registry by navigating to "Service Registry" in the Application and Data Services catalog. In Figure 8, I have created a "test-registry" instance.

In Figures 9 and 10 as shown, upload the schema.json to service registry. 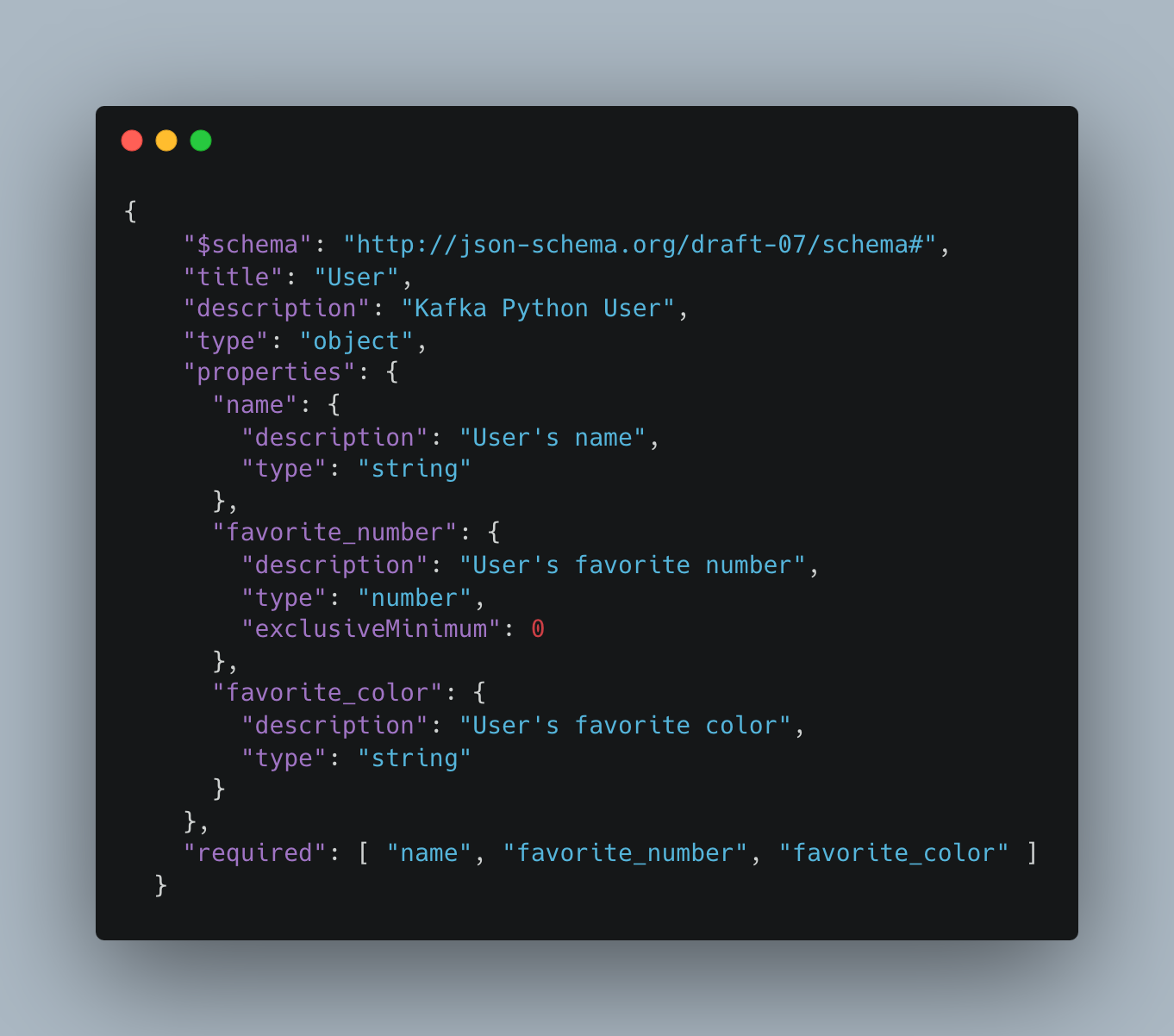 For the Confluence Python client, copy the "Schema Registry compatibility API" as shown in Figure 11. This API URL can be used by the schema registry client to access the schema when performing serialization/deserialization. 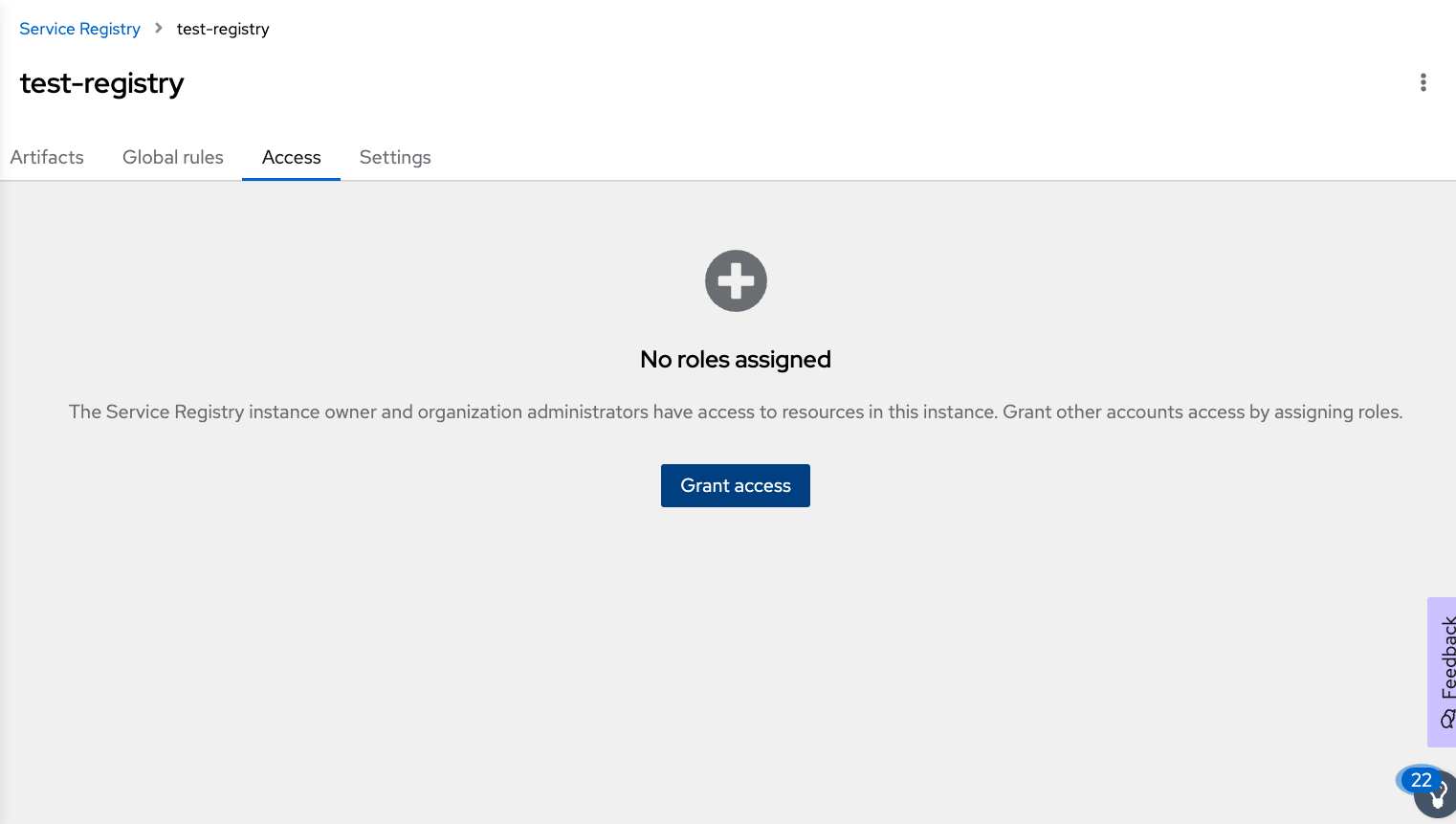 Select the service account from the account drop-down section and assign it as "Viewer" or "Manager" based on the use case shown in Figure 13. 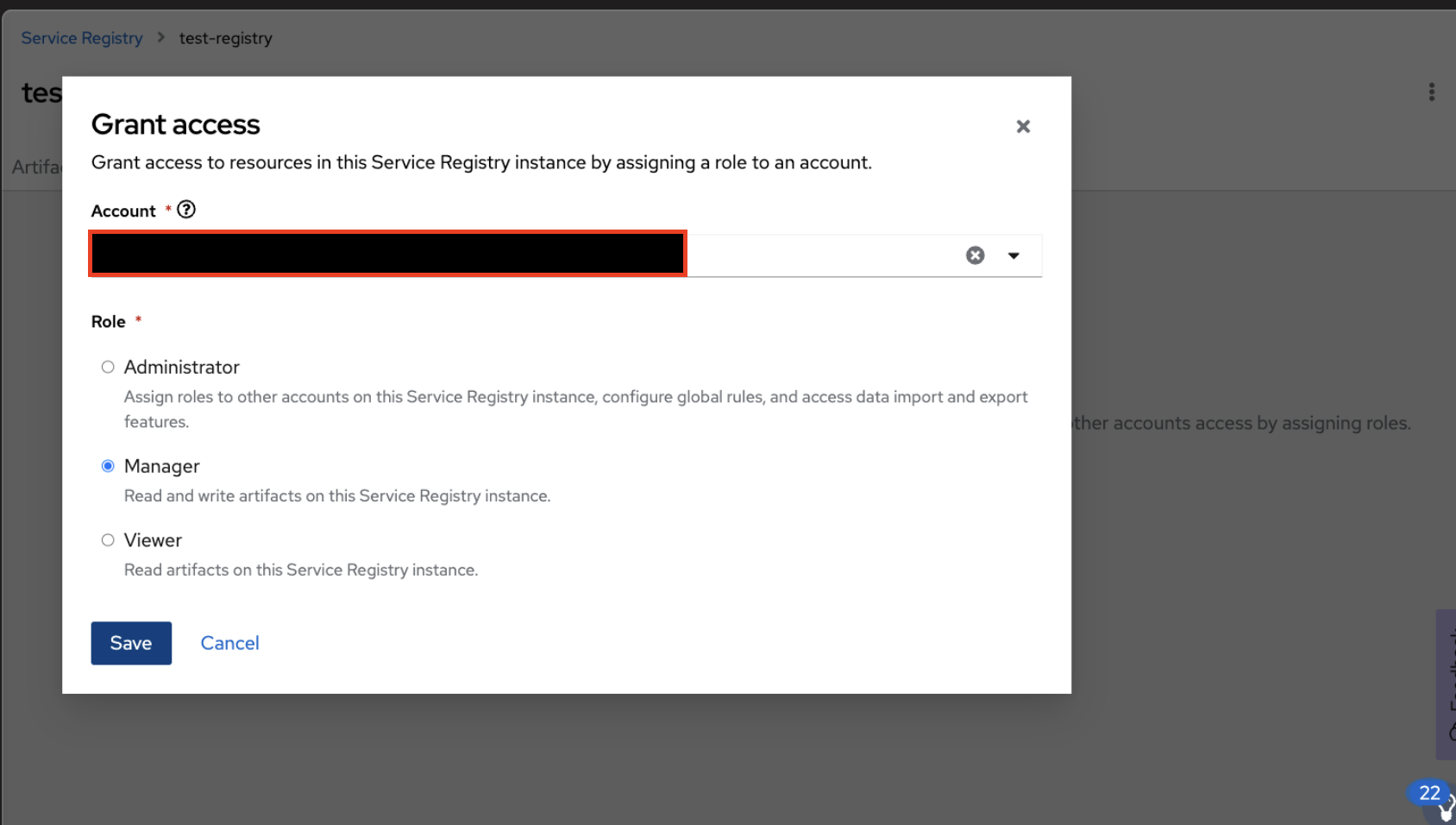 In Figure 14, you can see the configuration requirements for the Python producer client for using "SASL/OAUTHBEARER" with the service account passed as client_id, client_secrets, and authorization server token URL via command line arguments. 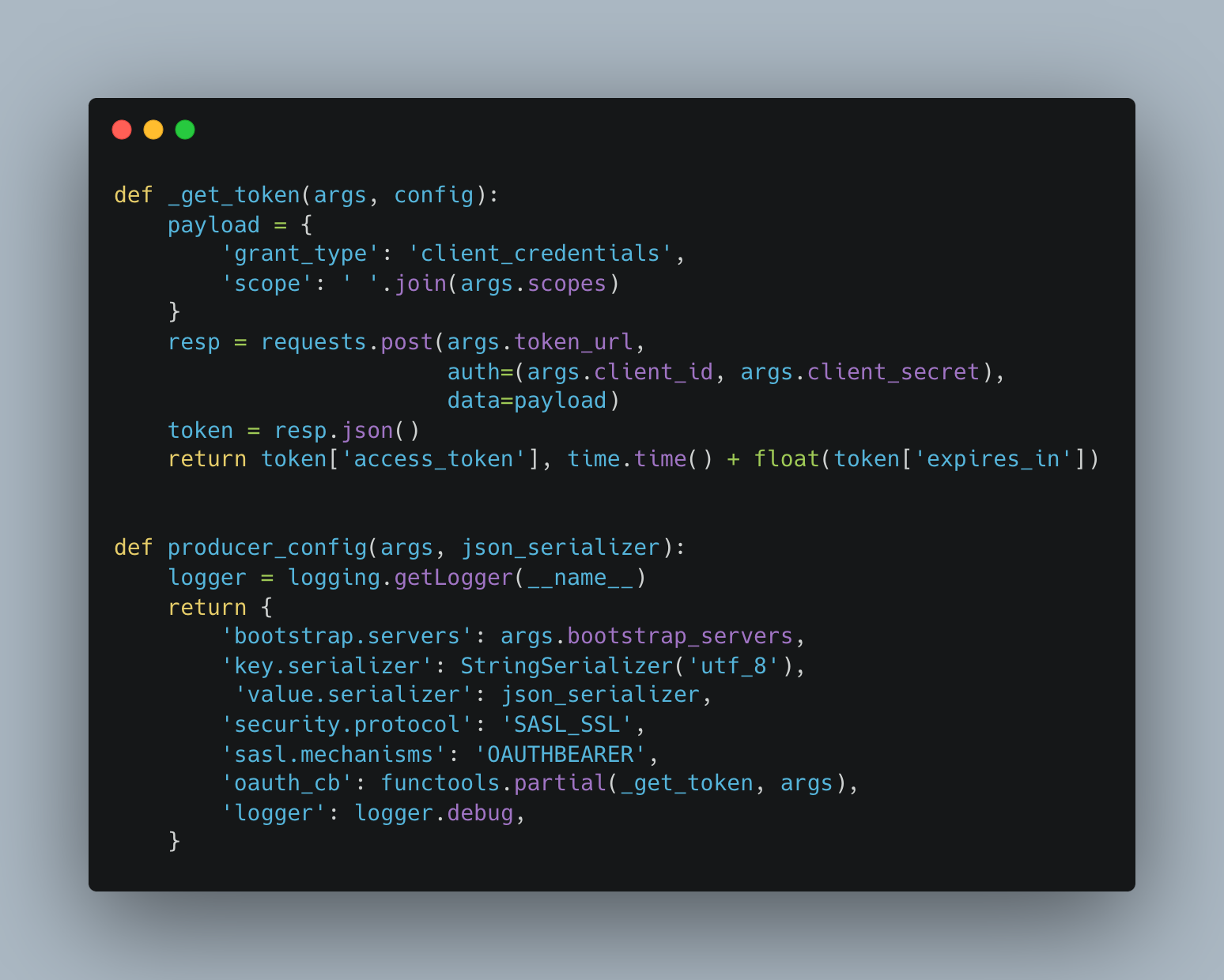 The schema registry will be used for the serialization of the message, which can be fetched from the service registry using the service account as a basic authentication mechanism. SchemaRegistryClient requires the "Schema Registry compatibility API" and service account, as shown in Figure 15. 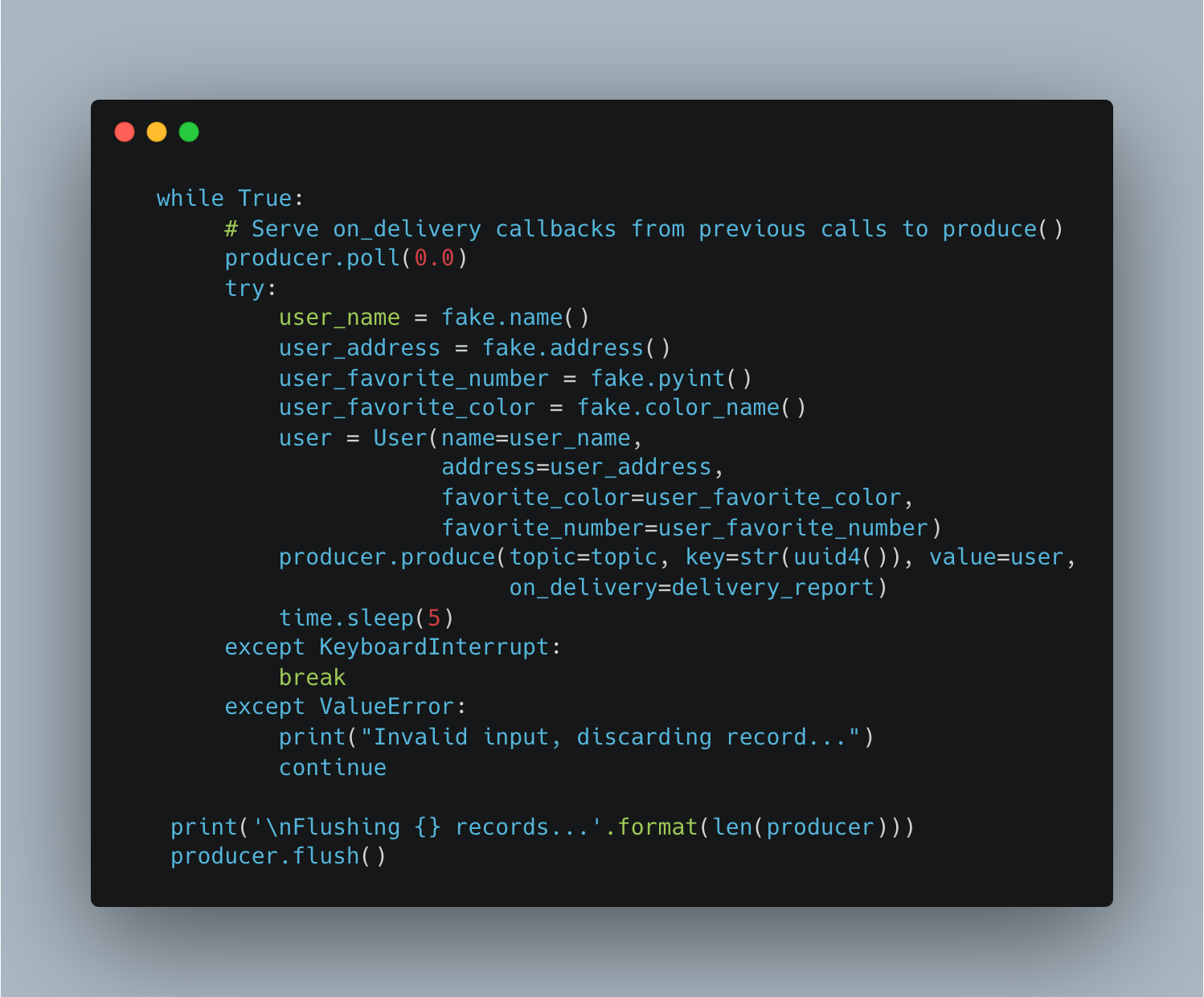 Python consumer client follows a similar configuration for the SASL/OAUTHBEARER protocol, as shown in Figure 17. 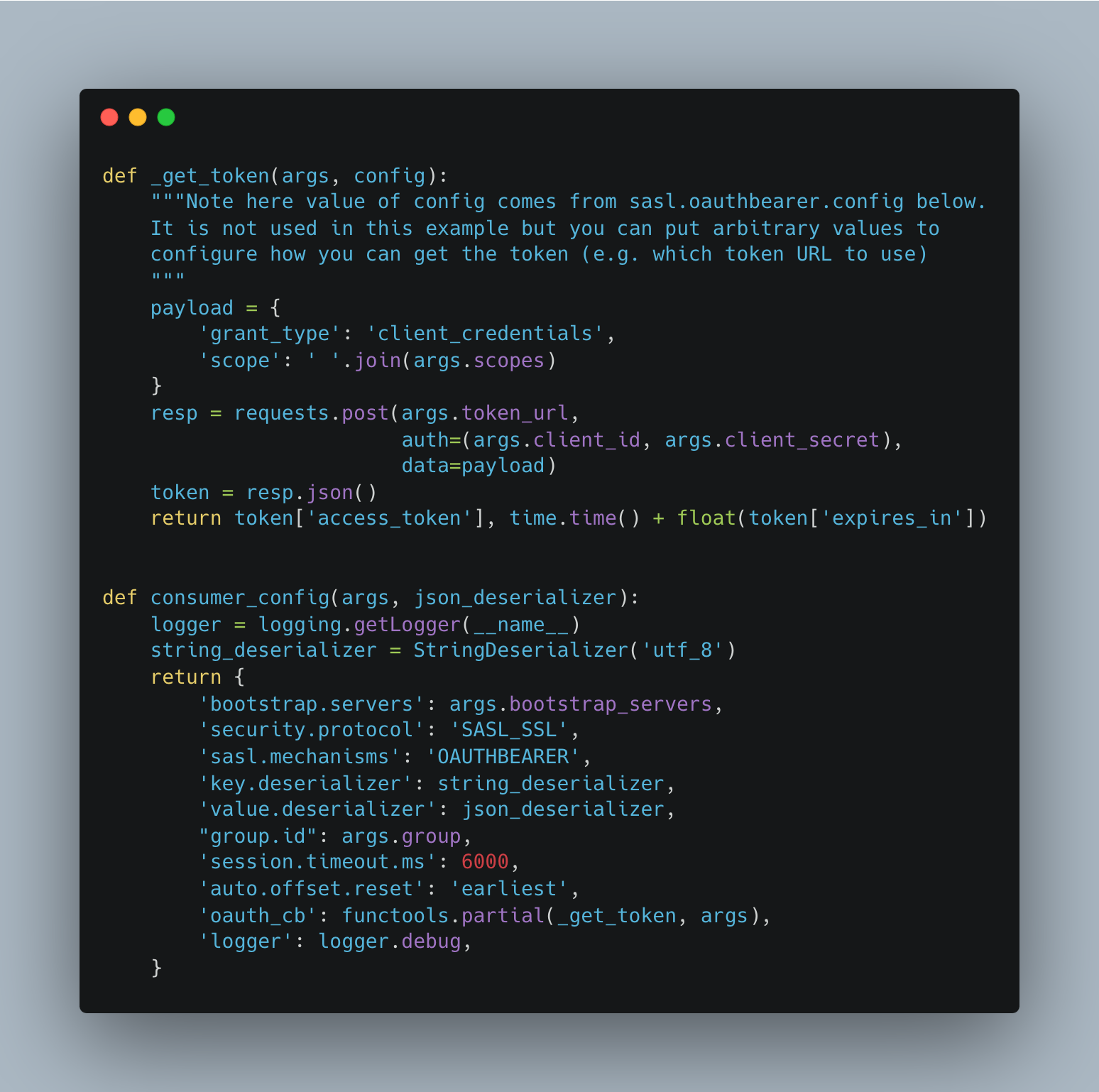 Let’s Try the Producer/Consumer in Action

We have seen how to configure Python clients to use SASL/OAUTHBEARER for producing/consuming messages to a topic using service registry service to perform serialization/deserialization for JSON schema. Hope you find this post helpful. Thank you for reading it.