Git is, without a doubt, an MVP in the development world. If you host your repos in Git, knowing the tricks of the trade is essential. In this post, we’ll take a look at how to use undo last commit to scrap your most recent committed changes that you don’t want or need to tweak. For more Git tips, check out this post on repo size maintenance and this post on checking out remote branches.

Git undo last commit is used to scrap the most recent record of changes made to a file in a distributed version control system (DVCS) without losing the changes themselves. The changes can be retained so the user can edit them and re-commit them.

To understand how git undo last commit works, the user needs to understand some definitions:

Almost anything that has been committed in git can be recovered — even if commits were deleted or overwritten. But if changes weren’t committed and lost, they are unlikely to be recovered.

To make git undo last commit, the user can use SmartGit, a graphical git that runs on Linux, Mac OS X (10.7 or newer) and Windows (Vista or newer). Choose the menu command Local|Undo Last Commit to undo that permanent record. The changes won’t be lost, so it will be possible to edit the changes and re-commit them.

Also, git-extras is a collection of git utilities that create aliases to commands needed to work with revision histories. For example, git undo last commit can be shortened to git undo. 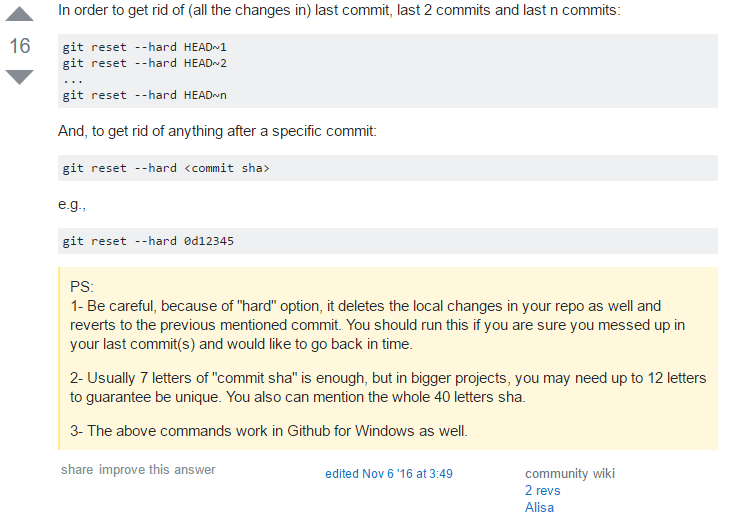 There are different ways to undo the last commit using the command line — which makes the lack of graphical interface a feature, not a bug.

A git undo last commit command is not terribly complicated. Nonetheless, probably the best way to undo the last commit is not to need to do go back and revise history. So commit to using version control best practices: