The idea of segmentation In OS is similar in function to paging, which is used to manage memory. Segmentation is a way to divide the user program and data into segments. Segmentation and paging are two different things. Each page in paging has a fixed size, while segments have a variable size. 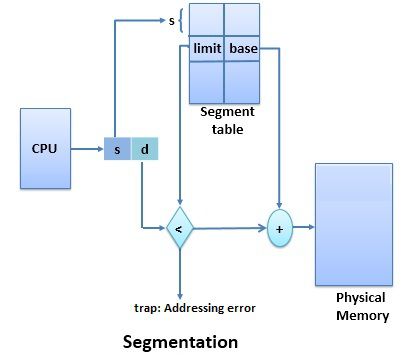 What Is Segmentation in OS?

Segmentation is used to manage memory. The user's view is plotted onto physical memory. Segmentation is where the user program is broken down into the number of segments that each segment is of variable size.

A program can be divided into segments according to the user's perspective. The main method has a set of objects, methods, arrays, and procedures. It also includes templates, global variables, and other items. These modules or data elements refer to the segments that the user refers to by their name. They are indifferent as to what address the modules or elements are stored in their memory. The user doesn't have to worry about the order in which the data elements or modules are stored in memory.

Let's now look at the implementation of segmentation.  Segmentation is a way to divide a user program into a number of segments.  A segment can be identified by two components: a segment name and a segment offset.

This section will show you how the two-dimensional address is mapped onto one-dimensional physical memories. As we have a page table for paging, we also have a segment table for segmentation.

As you can see in the above figure, the CPU calls for a segment and provides a two-dimensional address. The segment number (or segment name) and its offset are "d".

The segment number will allow you to get two additional details about the segment number in the segment table:  segments base address and its limit. The offset provided by the CPU is checked to see if it's between 0 and the limit for called segments.  If yes, then the offset is added to the base address of called segments to retrieve the physical address.  If the offset does not verify the condition, the operating system will throw an addressing error.  The logical address attempts to extend the segment limit.

Advantages and Disadvantages of Segmentation

Segmentation has many advantages:

Segmentation is an array that contains the base address and the limits.  The base address denotes where a particular segment is located in the physical memory, while the limit denotes how long it is.

External fragmentation can be caused by segmentation.