Backups are important. They give you peace of mind and protect you against data corruption, malware infection, or ransomware attacks.

In this article, we’ll take a closer look at WBAdmin and learn how to use it.

Microsoft’s group of operating systems comes with a handy WBAdmin command-line tool. It is made for advanced users, as it lacks any graphical user interface(GUI). With WBAdmin, you can back up or restore operating systems (OS), files, folders, volumes, and even applications. 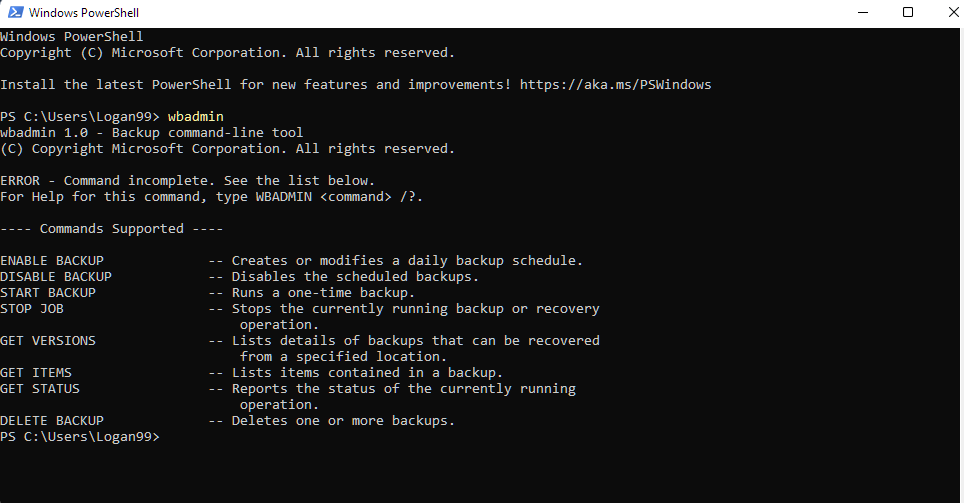 Before we dive deep into WBAdmin features and how to use them, let’s quickly cover NTBackup, the older sibling of WBAdmin.

If you’re using any old system running Windows Server 2008, then you get NTBackup, another command-line tool with access to wizard interfaces. You can create and manage backups through task scheduler and shadow copy. It was an efficient method and primarily used the BKF file format. You’re free to store the backups in both internal and external storage.

The main difference between NTBackup and WBAdmin is the support of backup formats and destination devices. Also, they’re not compatible with each other. This means you cannot restore NTBackup’s backup files using WBAdmin. However, if you’re interested, Microsoft has provided a Windows NT Backup. This restore utility lets you work with a legacy backup.

How Does WBAdmin Work?

WBAdmin is a disk-based backup system. It uses Volume Shadow Copy Service (VSS) to take block-level system backups. It uses VHD (virtual hard disks) to store the backups, creating an exact partition/volumes mirror of the system. Also, if you’re using Windows 8 or later, WBAdmin will create VHDX backup files that offer an improvement over the VHD format, including the ability to shrink volumes quickly. Along with VHD/VHDX, WBAdmin also creates XML configuration files. Windows Disk Manager lets you mount and view the contents of the .VHD file.

Under the hood, WBAdmin uses Volume Shadow Service (VSS) to update data changes with the differencing engine on a block-by-block basis. The update can be either full or incremental; so, if a change occurs, a new block copy is pushed in the VSS while the older one is pushed out.

For novice users, Windows offers System Backup and Restore, a graphical user interface (GUI) of WBAdmin. It simplifies the whole backup and restores the process. For workstation editions, there is a backup wizard in the control panel. Finally, we have WBAdmin.MSC, a pre-installed Windows feature that uses Windows Management Console.

WBAdmin is also capable of taking “bare-metal” backups. This means you can use the backup on systems with the same or different hardware. Moreover, you can restore the backups through Windows media installation DVD or use an external storage device with a backup copy.

WBAdmin comes with plenty of commands. Here are the most important ones that you should know. You need to put “wbadmin” in front of the commands for them to work. For example, wbadmin enable backup.

If you need more help, then type “wbadmin /?” in the command prompt for help.

How to Use WBAdmin

To use WBAdmin, you must be part of the Administrator or Backup Operators group. If you’re not, ask your administrator to make you part of the group or give you appropriate rights to operate WBAdmin at an admin level.

Next, you can enable daily backups or modify the existing backup schedule with the following command: wbdmin enable backups.

Here, you can add parameters such as -addtarget to specify the backup destination. You can also add a schedule, include sources to back up, and tell WBAdmin to do a full backup.

This command does a backup of G:\ drive to E:\ drive using VSS without any prompts. You can also add a schedule using the -schedule parameter.

To create a fresh backup (not touching the old backup files), you need to use the wbadmin start backup command.

To check the available backups, you need to use wbadmin get versions.

For recovery, you have wbadmin start recovery. For example,

Tips To Use WBAdmin Effectively

WBAdmin is simple to use for the person with the proper knowledge. To use it effectively, keep these points in mind:

Conclusion: Should You Use It?

If you’re an advanced user, then you should use it. WBAdmin offers an elegant way to back up and restore files on file, folder, application, and OS level. The command-line approach may scare a few users, but also gives complete control over your backup procedure. If you’re not comfortable with WBadmin, check out the GUI version in Windows OS, which is known as Backup & Restore and Windows Server Backup. You can also use third-party solutions which offer more ease of use at a given cost (free ones are not worth your time).