ZooKeeper is fast. It is especially fast in "read-dominant" workloads. Zookeeper applications run on thousands of machines, and it performs best where reads are more common than writes, at ratios of around 10:1.

The servers that make up the ZooKeeper service must all know about each other. They maintain an in-memory image of state, along with transaction logs and snapshots in a persistent store. As long as a majority of the servers are available, the Zookeeper service will be available.

znodes refer to the data nodes. Every node in a ZooKeeper tree is referred to as a znode. Data must be small- 1MB maximum.

Zookeeper allows distributed processes to coordinate with each other through a shared hierarchal namespace which is organized similarly to a standard file system. The namespace consists of data registers called znodes. znodes are identified by unique absolute paths which are “/” delimited Unicode strings. 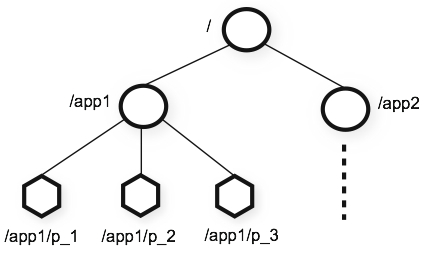 znodes maintain a stat which provides the metadata of a znode. It consists of version number, action control list (ACL), timestamp, and data length. Each time a znode's data changes, the version number increases. For instance, whenever a client retrieves data, it also receives the version of the data.

Clients maintain an in-memory image of state, along with transaction logs and snapshots in a persistent store.

Read requests are serviced from the local replica of each server database. Requests that change the state of the service, write requests, are processed by an agreement protocol

As part of the agreement protocol, all write requests from clients are forwarded to a single server, called the leader. The rest of the ZooKeeper servers, called followers, receive message proposals from the leader and agree upon message delivery. The messaging layer takes care of replacing leaders on failures and syncing followers with leaders.

When a client gets a handle to the ZooKeeper service, ZooKeeper creates a ZooKeeper session, represented as a 64-bit number, that it assigns to the client. If the client connects to a different ZooKeeper server, it will send the session id as a part of the connection handshake. Session expiration is managed by the ZooKeeper cluster itself, not by the client. Expirations happens when the cluster does not hear from the client within the specified session timeout period (heartbeat).

ZooKeeper supports the concept of watches. Clients can set a watch on a znode. A watch will be triggered and removed when the znode changes. When a watch is triggered, the client receives a packet saying that the znode has changed.

Another function directly provided by Zookeeper is group membership. The group is represented by a node. Members of the group create ephemeral nodes under the group node. Nodes of the members that fail abnormally will be removed automatically when Zookeeper detects the failure.

Zookeeper provides simple APIs to create, delete and check the existence of a node, get children of a node, get and set data, and sync (waits for data to be propagated).

When the server starts up, it knows which server it is by looking for the file myid in the data directory. That file has the contains the server number, in ASCII.

Peers use the port 2888 to connect to other peers and leader. Port 3888 is used for leader election.

To implement a distributed queue in ZooKeeper, first designate a znode to hold the queue, the queue node. The distributed clients put something into the queue by calling create() with a pathname ending in "queue-", with the sequence and ephemeral flags in the create() call set to true. Because the sequence flag is set, the new pathnames will have the form _path-to-queue-node_/queue-X, where X is a monotonic increasing number.

Distributed systems use barriers to block processing of a set of nodes until a condition is met. Barriers are implemented in ZooKeeper by designating a barrier node. The barrier is in place if the barrier node exists

a. Client calls the ZooKeeper API's exists() function on the barrier node, with watch set to true.

b. If exists() returns false, the barrier is gone and the client proceeds

c. Else, if exists() returns true, the clients wait for a watch event from ZooKeeper for the barrier node.

d. When the watch event is triggered, the client reissues the exists( ) call, again waiting until the barrier node is removed.

Distributed locks that are globally synchronous, meaning at any snapshot in time no two clients think they hold the same lock.

First, define a lock node. Lock protocol: Call create( ) with a pathname of "_locknode_/lock-" and the sequence and ephemeral flags set. Call getChildren( )  on the lock node without setting the watch flag.

If the path name created in step 1 has the lowest sequence number suffix, the client has the lock and the client exits the protocol.

The client calls exists( )  with the watch flag set on the path in the lock directory with the next lowest sequence number. If exists( ) returns false, go to step 2. Otherwise, wait for a notification for the path name from the previous step before going to step 2.

The unlock protocol is very simple: clients wishing to release a lock simply delete the node they created in step 1.

For a given instance, the node which creates the smallest number in the znode becomes the leader and all the other nodes are followers.

If the leader goes down, then its corresponding znode /app/leader_electionN gets deleted.

The next in line follower node will get the notification through watcher about the leader removal.

Similarly, all other follower nodes elect the node which created the znode with the smallest number as leader.