There are several software products on the market that are used for their varied applications. This software makes the different tasks easier and allows for increased efficiency and performance. Development of any software is a tedious and long process, and it undergoes a series of quality and performance tests before its release and use. With the development in technology, the software gets upgraded with the latest updates.

As the technological world evolves, so do user expectations for handling applications; it is essential to test the performance of the applications before deploying them on a large scale.

Measuring the software product's performance is very important for the success of software development. It is essential to check if the software can perform the assigned task and also help in its constant improvement. Measuring performance allows the development team to identify the problem and help them solve it at the earliest by taking quick actions.

Performance testing allows for identifying areas for improvement. It allows the development team to gauge the time required for the completion of the task. This will provide the clients with a more accurate project plan.

Measuring software products using metrics gives you a lot of benefits; take a look at a few of those.

How Do You Measure Software Development Performance? 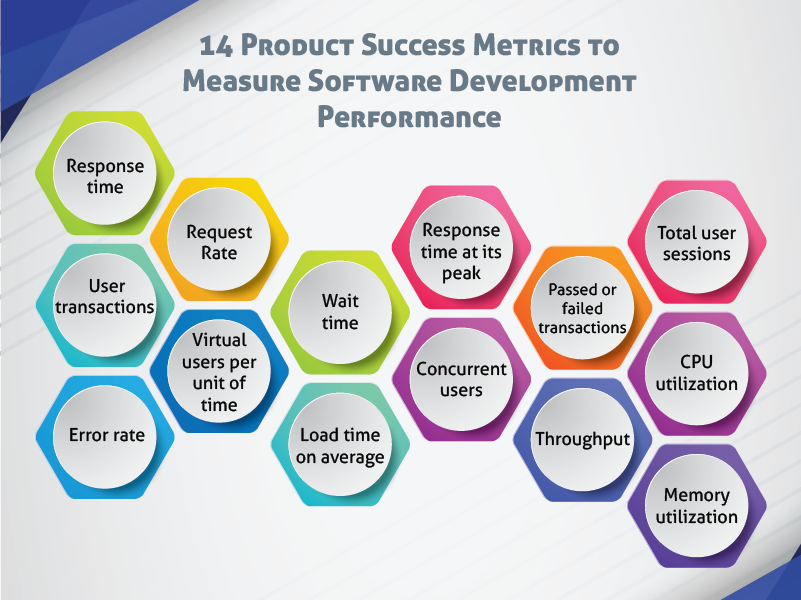 It is the basic measurement of performance and includes the time that passes from the moment the request enters the server until the last byte is received from the server. This response time metric is measured in kilobytes per second.

Well, the request rate metric is termed as the application sent by the client gets registered as an HTTP request and sent to the server. The server software then processes the request, generates the response, and responds to the clients. The total number of consistent requests is recorded as requests per second (RPS). The requests can be recorded in any data format, like HTML pages, Javascript libraries, multimedia files, XML documents, etc.

The software interface records the sequence of user actions. Comparing the actual transaction time with the expected time helps in concluding how successful the system is while passing the load test.

4. Virtual Users Per Unit of Time:

This metric helps in checking the performance of the software product if it meets the defined requirements. This metric enables the QA team to estimate the average load and the software behavior in different load conditions.

The metric calculates the ratio of invalid answers to valid answers over a period of time. These results are presented as a percentage. The error occurs when the software load exceeds its capacity. The different ways of tracking the errors include the HTTP error per cent, logged exceptions, thrown exceptions, etc.

Wait time is also known as latent time, and it is the time that passes from the moment when the request is sent to the server until the first byte is received. The metrics are measured in terms of KB/sec. This metric is different from the response time as the time frame included is different.

This is the time period taken to deliver the request. This is one of the major parameters used for the estimation of the quality of the software based on its operation. It is observed that if the webpage takes more than three seconds to load, then the user tends to abandon the page. Thus, it is the task of the QA team to measure the average load time. The team needs to suggest the areas for optimization of the page loads at a slower pace.

8. Response Time at Its Peak:

This metric is also called the load size as it helps in showing the number of active users at any given time point. This metric is widely used for studying software behavior under several virtual users. It is similar to requests per second but differs in that it does not generate any consistent requests. In the concept of thinking time, all the requests do not go to the server simultaneously but in sequence with short pauses between each request.

This is one of the simplest metrics used to express the percentage of passed or failed tests in comparison to the total number of tests performed. This metric is similar to the load time and critical metrics for the end-users.

This metric defines the bandwidth used during the tests. This metric indicates the maximum amount of data that flows through any particular network in a given amount of time. This metric is measured as KB/sec and depends on the number of concurrent users.

Well, the name itself tells you the whole story of these metrics and how they are going to be handled. This metric is used to calculate how much time the CPU (central processing unit) uses for processing any request raised by the end-users.

It is one of the specific metrics used to check the software product’s performance by the testing team. This metric defines how much resources are utilized for processing any request in terms of physical memory on any given device used by the QA team for testing.

This metric provides the intensity over any particular time. This can be measured by the number of sessions per week. or per month, and it depends on the time frame selected by the product owner. The total user session data includes details like the number of pages viewed and bytes transferred.

It Is Worth Measure Software Product Performance