Making sense of the average, standard deviation and percentiles in performance testing reports.

There are certain performance testing metrics that are essential to understand properly in order to draw the right conclusions from your tests. These metrics require some basic understanding of math and statistics, but nothing too complicated. The issue is that if you don’t understand well what each one means or what they represent, you’ll come to some very wrong conclusions.

In this post, I want to focus on average, standard deviation and percentiles. Without going into a lot of math, we’ll discuss their usefulness when analyzing performance results.

The Importance of Analyzing Data as a Graph

The first time I thought about this subject was during a course that Scott Barber gave in 2008 (when we were just starting up Abstracta), on his visit to Uruguay. He showed us a table with values like this:

He asked us which data set we thought had the best performance, which is not quite as easy to discern as when you display the data in a graph: 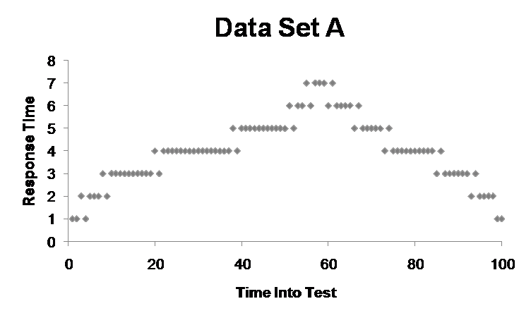 In Set A, you can tell there was a peak, but then it recovers. 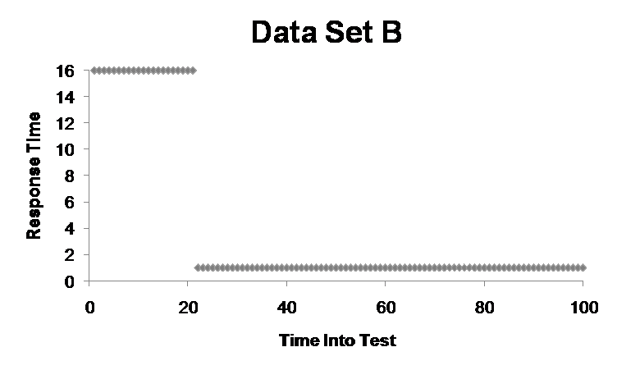 In Set B, it seems that it started out with very poor response times and probably 20 seconds into testing, the system collapsed and began to respond to an error page, which then got resolved in a second. 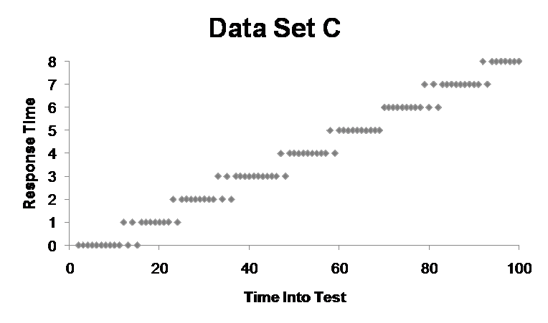 Finally, in Set C, it’s clear that as time passed, the system performance continued to degrade.

Barber’s aim with this exercise was to show that it’s much easier to analyze the information when it’s presented in a graph. In addition, in the table, the information is summarized, but in the graphs, you can see all the points. Thus, with more data points, we can gain a clearer picture of what is going on.

Ok, now let’s see what each of the metrics for performance testing means, one by one, and their importance for analysis purposes.

To calculate the average, simply add up all the values of the samples and then divide that number by the number of samples. Let’s say I do this and my resulting average is 3 seconds. The problem with this is that, at face value, it gives you a false sense that all response times are about three seconds, some a little more and some a little less, but that might not be the case.

This is a very simple example that shows that three very different values could result in an average of three, yet the individual values may not be anywhere close to 3.

My colleague, Fabian Baptista, made a funny comment related to this:

So, when analyzing average response times, it’s possible to have a result that’s within the acceptable level, but be careful with the conclusions you reach.

That’s why it is not recommended to define service level agreements (SLAs) using averages; instead, have something like “The service must respond in less than 1 second for 99% of cases.” We’ll see more about this later with the percentile metric.

To understand how to interpret this value, let’s look at a couple of examples.

Although the value of the average as a metric can be greatly improved by also including the standard deviation, what’s more, useful yet are the percentile values.

A percentile is a very useful performance testing metric that gives a measure under which a percentage of the sample is found. For example, the 90th percentile (abbreviated as p90) indicates that 90% of the sample is below that value and the rest of the values (that is, the other 10%) are above it.

It’s practical to analyze more than one percentile value (JMeter and Gatling do so in their reports), showing how many samples are p90, p95, and p99. If these are complemented with the minimum, maximum and average, then it’s possible to have a much more complete view of the data and thus understand how the system behaved.

The percentile is typically used to establish acceptance criteria, indicating that 90% of the sample should be below a certain value. This is done to rule out outliers.

So, before you go analyzing your next performance test’s results, make sure to remember these key considerations:

What other considerations do you have when analyzing performance testing metrics? Let me know!