This is the third post in a series about creating a SonarQube plugin for the Kotlin language:

In this final post, we will be creating the plugin proper using the code of the 2 previous posts.

The Sonar model is based on the following abstractions:

Entry-point for plugins to inject extensions into SonarQube

Define a profile which is automatically registered during sonar startup

A profile is a mutable set of fully configured rules. While not strictly necessary, having a Sonar profile pre-registered allows users to analyze their code without further configuration. Every language plugin offered by Sonar has at least one profile attached.

Defines some coding rules of the same repository

A sensor is invoked once for each module of a project, starting from leaf modules. The sensor can parse a flat file, connect to a web server... Sensors are used to add measure and issues at file level.

The sensor is the entry-point where the magic happens.

Starting to Code the Plugin

Every abstraction above needs a concrete subclass. Note that the API classes themselves are all fairly decoupled. It’s the role of the Plugin child class to bind them together.

Most of the code is mainly boilerplate, but for ANTLR code.

On one hand, the parsing code is based on generated listeners. On the other hand, the sensor is the entry-point to the SonarQube parsing. There’s a need for a bridge between the two.

In the first article, we used an existing grammar for Kotlin to generate parsing code. SonarQube provides its own lexer/parser generating tool (SonarSource Language Recognizer). A sizeable part of the plugin API is based on it. Describing the grammar is no small feat for any real-life language, so I preferred to design my own adapter code instead.

Subclass of the generated ANTLR KotlinParserBaseListener. It has an attribute to store violations, and a method to add such a violation.

The violation only contains the line number, as the rest of the required information will be stored into a KotlinCheck instance.

Abstract class that wraps an AbstractKotlinParserListener. Defines what constitutes a violation. It handles the ANTLR boilerplate code itself.

This can be represented as the following:

The general pseudo-code should look something akin to:

Let’s create a dummy Maven project with two classes, Test1 and Test2 in one Test.kt file, with the same code as last week. Running mvn sonar:sonar yields the following output: 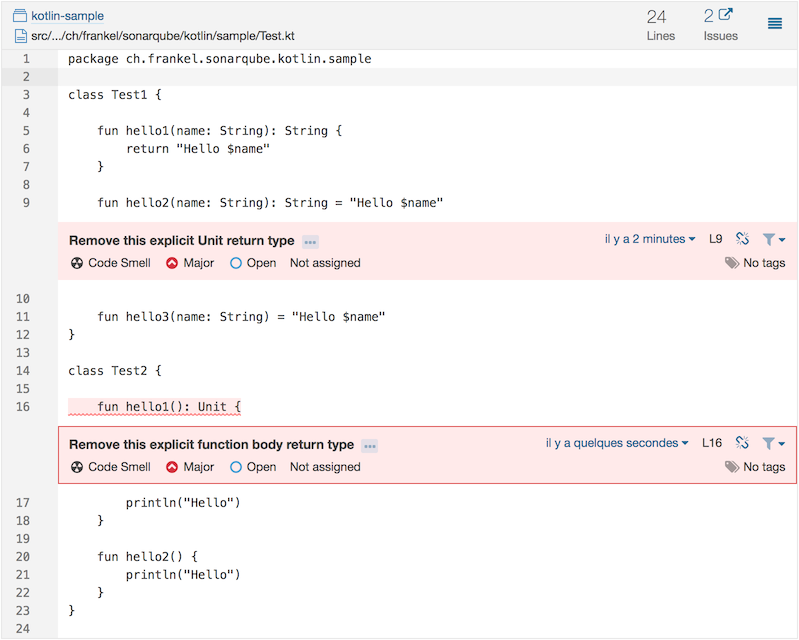 Et voilà, our first SonarQube plugin for Kotlin, checking for our custom-developed violations.

Of course, it has (a lot of) room for improvements:

That still makes the project a nice starting point for a full-fledged Kotlin plugin. Pull requests are welcome!