System security usually includes two core topics: authentication and authorization. One solves the problem of “Who is s/he?” and the other solves the problem of “Does s/he have permission to perform an operation?” In the big data area, Apache Ranger is one of the most popular choices for authorization, it supports all mainstream big data components, including HDFS, Hive, HBase, and so on. As Amazon EMR rolls out native ranger (plugins) features, users can manage the authorization of EMRFS(S3), Spark, Hive, and Trino all together. For authentication, an organization usually has its own centralized authentication infrastructure, i.e., Windows AD or OpenLDAP; however, for most big data components, Kerberos is only supported authentication mechanism, so users usually need to integrate Windows AD/OpenLDAP and Kerberos together to unify authentication.

We will focus on how to implement automated installation and integration for Amazon EMR and Apache Ranger. This series is composed of four articles. Each article will introduce a completed solution against different technology stacks.

For authentication providers, Windows AD and OpenLDAP are most widely used. Their installation and integration are very different, so they should count as two separate jobs.

For Kerberos, if enabled, it will bring a lot of changes to the above jobs, so enabling or disabling Kerberos is also two separate jobs.

In summary, based on the three factors above, there are eight possible scenarios (technology stacks) as follows: 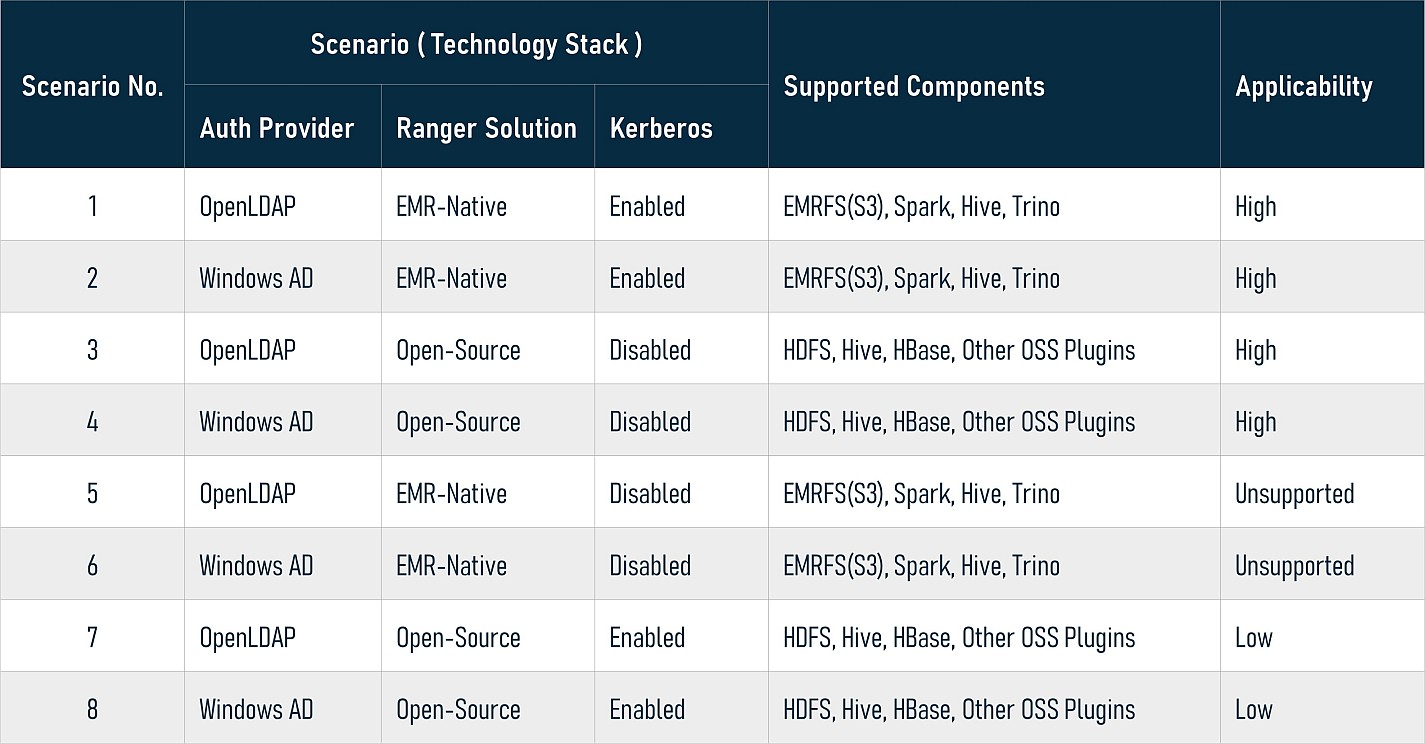 This series is composed of four articles, which are against the first four scenarios. The following is a scenarios and solution map:

For scenarios 5 and 6, as of this writing, EMR is not yet supported. Since disabling Kerberos on EMR cluster is not a recommended practice, the AWS service team is working on a solution to meet the needs. For scenarios 7 and 8, considering few users pick them, we won't discuss them.

Note: At the time of writing, Trino plugin is NOT available yet, so this solution does NOT support Trino plugin at present.

2. Why Is Installing Ranger So Difficult?

Whether you’ve successfully made it before or not, installing and integrating Windows AD/OpenLDAP + Ranger + EMR is a very hard job, it is complicated, error-prone, and time-consuming for the following reasons:

The overlapping of the above factors makes this job very difficult.

It supports four scenarios (No. 1, 2, 3, 4) at the same time. In other words, it supports Windows AD and OpenLDAP and works in all AWS regions (including Chinese regions). For Scenarios 3/4, this installer can install on an existing cluster and supports multi-master clusters and single-master clusters. For each step, this installer always checks connectivity first then decides whether to go for the next steps. This is very helpful to identify network issues or service failure, i.e., when Ranger or OpenLDAP is not up. Finally, the actual installation job is a trial-and-error process. Users always need to try different parameter values to find the one that works in users' environment. The installer allows users to rerun an all-in-one installation anytime without side effects and users can also do a step-by-step run for debugging. The following is a key features summary:

We know there is an existing solution on this AWS blog: “Implementing Authorization and Auditing using Apache Ranger on Amazon EMR.” However, this installer is very different from the solution to design to features. This solution only supports two scenarios, (No. 2, 4), and works in the us-east-1 region only. For Scenarios 3/4, this solution can not support existing or multi-master clusters, and so on. This series of articles are totally based on this tool to guide users through the installation for the first four scenarios.

Because EMR and Ranger have multiple versions, the compatibility between different versions should be brought to our attention. Generally, Ranger 1 works with Hadoop 2 and Ranger 2 works with Hadoop 3. This installer is developed against Ranger 2.1.0 and 2.2.0, so it only supports EMR 6.X. We fully tested four solutions against Ranger 2.1.0, all passed, and we partially tested for Ranger 2.2.0, which also works, but there may be potential bugs which are not found yet. The following is Ranger and EMR version compatibility matrix:

In the next article, we start to introduce each solution one by one.