The serverless offerings of AWS (or any other public cloud provider today) are getting more and more popular. One of the biggest reasons is of course not needing to think about infra (server provisioning and so on). The other reasons include the offerings themselves, which at times fit well into the technical need for finding solutions to the given problems. But on the other side, it remains a challenge to know the offerings in detail to leverage them properly. There could be always some new feature hidden deep inside the bulk of the documentation.

A retail company decided to leverage the AWS Serverless offering for modernizing their on-premises integrations for order management business process. We can go serverless in the cloud in various ways, but the initial solutioning was decided to leverage the Step Function and Lambda Function along with some more integration offerings from AWS, namely SNS, SQS, and EventBridge.

The coding was done, so the unit testing and system integration testing followed by the UAT. Everything looked fine. It went live and started handling the transactions quite well. And then one day, there was an unplanned AWS outage spanning almost a whole business day. What could happen next? Let’s see.

Challenge With the Initial Solution

The outage brought on a disastrous situation. While the integration was designed to get triggered by an EventBridge schedule, it was the Lambda Function which would pull the inbound payloads from the SQS which would in turn subscribe to the SNS topic where the order management system would publish the payloads when an order would be placed from the portal, due to the outage, the inbound payloads got piled up in the SQS. Not only that, but the messages which were ingested into the database got piled up unprocessed. 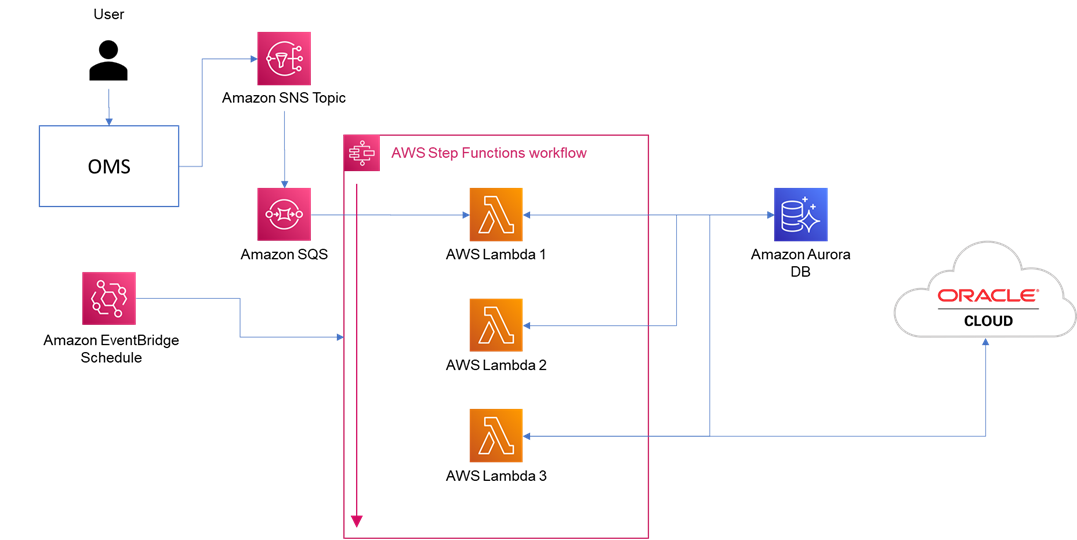 And then the real challenge began once the outage was restored. The flows started progressing, but the rate of the payloads getting processed were too low to cope with the business need. That low rate being allowed, the whole set of pending transactions would take months to complete, which was obviously not rationally acceptable. So, the need for the moment became to enhance the solution in a way that scales up when needed to reduce the backlogs.

The current design had three Lambda Functions — the first one would pull the payloads from the SQS and insert it into the database, the second one would parse those and insert the values as records in another table in the database, the third one would process the records, i.e., invoke Oracle ERP APIs (the company is using Oracle ERP as matter of their choice) to create, update, or delete the purchase orders there. The Step Function would be triggered by the EventBridge rule. At first, the Lambda 1 would be executed inserting the pulled payloads into the table. The Lambda 2 would then iterate over the unparsed payloads in the database to parse each of the payloads and insert the respective records into the database. Lambda 3 would then iterate over the unprocessed records in the table and process those as required by invoking APIs and so on.

The catch is: The queries used to select the unparsed or unprocessed records from the database would be limited by the maximum number of records those could fetch based on how much time the respective Lambda Function would take to process those. This is required because Lambda Function in AWS can run only up to 15 minutes, beyond which it will time out and stop its execution abruptly.

That’s fair enough from the AWS offering perspective, because Lambda Function is not intended to be used for long-running jobs. Also, it's fair to raise a question on the initial design decision to use Lambda Function for this integration. A better solution could be leveraging an EC2 instance or a containerized solution leveraging AWS Fargate, if staying serverless was one of the key requirements. But here, we would focus only on the capability of the Step Function to scale up to handle the given situation. The same feature of the Step Function can be leveraged in other scenarios that might appear when modernizing integrations, especially when there is a need for orchestration or workflow and when we prefer to go serverless.

Out of the remaining state types, two which are relevant to this topic are "Map" and "Parallel." Well, the answer to this problem is Map State, but why am I mentioning the "Parallel?" There is a thin line of difference between them, but the names can really be misleading at times. It is worth explaining the difference in this context.

The above diagram may make it clear why Map State is the desired option in this case. To explain the improved solution more specifically in detail:

After this solution was implemented, the backlog took around 24 hours to get cleared. However, it was not an all-green situation. The backlog was cleared but the Operations Team observed further challenges over time which were even more deep-rooted to the fundamental design decisions of this solution.

Like it happens in any standard retail order management business process, the high-level steps of the order journey remain, like Purchase Order (PO) Creation > Receipt of the PO > Invoice Generation of the PO > Return/Replacement Processing (if any). There were integrations for each of these modules which were modernized following the same design pattern. That said, the challenges observed over the time were as below.

A possible solution could be usage of SNS FIFO topic with SQS FIFO queue to achieve the fan-out pattern across all these integrations to ensure the sequence of events are processed in the same sequence as generated. But there could be many other ways of solving this issue (e.g., publishing the PO creation status to an SNS topic and have all the involved systems subscribed to that topic to sync it across those systems and so on) subject to the technical feasibilities and dependencies.

There could be two possible ways to resolve this.

Modernization of integrations using Lambda Functions alone may not always be a favorable option, especially when the integration has huge transformation logic and a high volume of transactional requirements. It may shoot up the cost too high in those cases, or sometimes fail miserably to scale up. However, some of the Step Function features (when used to orchestrate the tasks defined in Lambda Functions) may be helpful to come up with decent and flexible solutions in terms of scalability.

The below is sample code with similar orchestration logic as described in the improved solution for this case study. This is not the exact solution, but just an indicative sample.

The above sample Step Function, when executed with an input as seen in the screenshot below, identifies the iterations for each Map State and executes them concurrently.

The below timestamps show that each of the three iterations of the first Map State started exactly at the same time, ensuring concurrency. 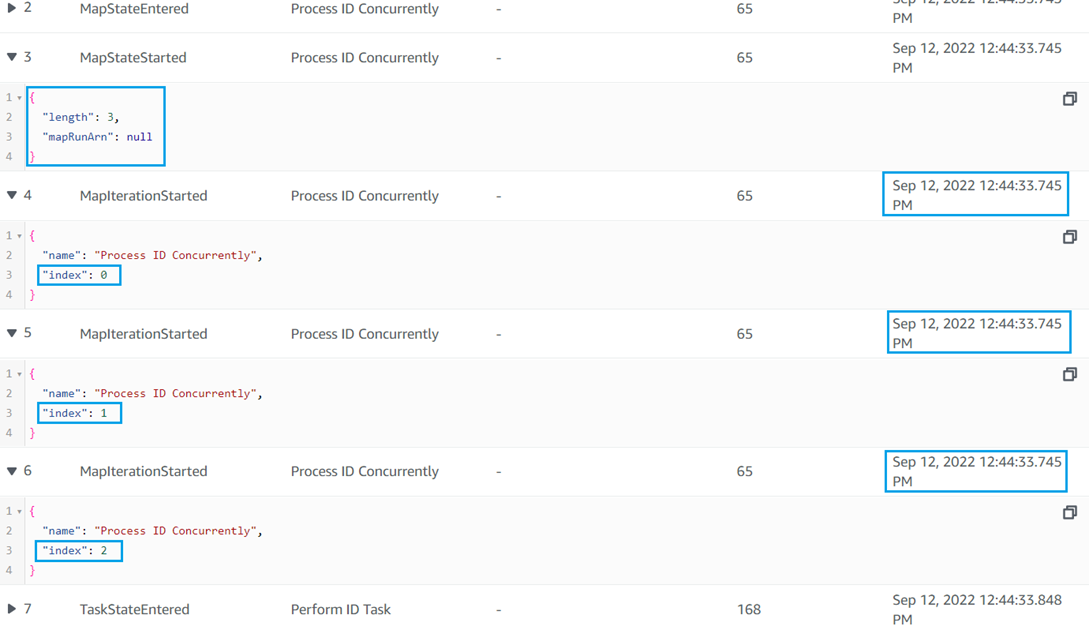 The below timestamps show that each of the two iterations of the second Map State started exactly at the same time, ensuring concurrency. Also, it is noticeable that this state started after the first Map State was completed, i.e., two separate Map States are not concurrently executed.

The below screenshot shows the three iterations for the first Map State have taken each item in the outer list of the JSON input as their individual inputs. 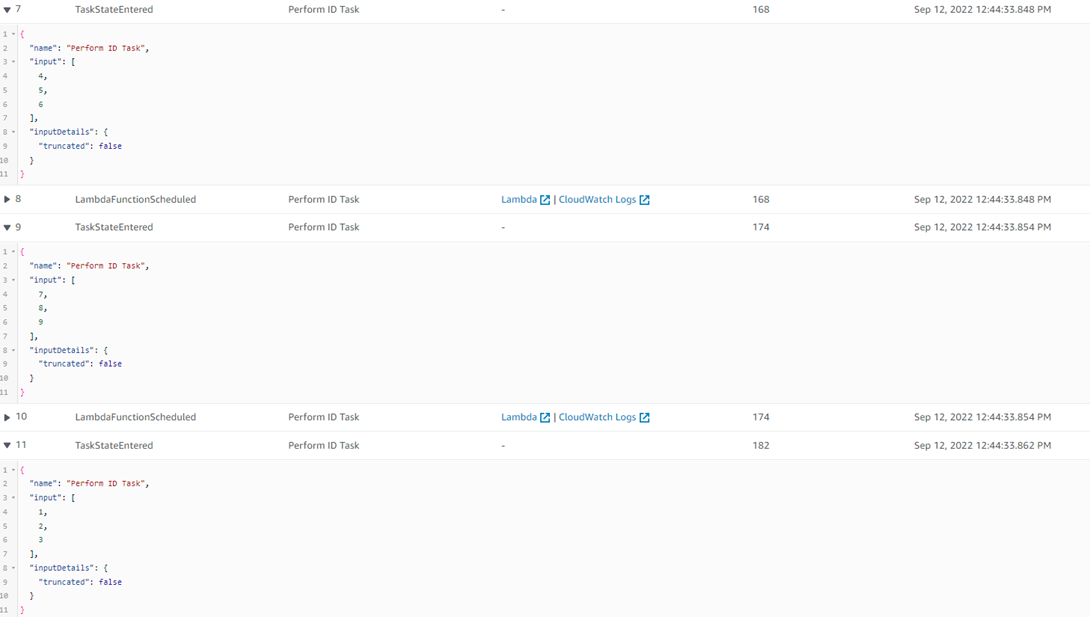 The below screenshot shows the two iterations for the second Map State have taken each item in the outer list of the JSON input as their individual inputs.

The below screenshot shows the CouldWatch Log for the Lambda (ProcessUniqueID) which is invoked from the first Map State to perform the ID Task.

The below screenshot shows the CouldWatch Log for the Lambda (ProcessUniqueName) which is invoked from the second Map State to perform the Name Task.