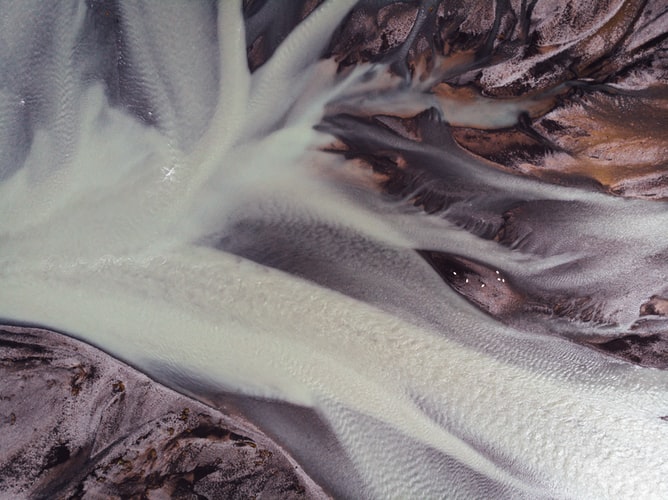 Bill Gates once said: "I choose a lazy person to do a difficult job because a lazy person will find an easy way to do it." Nothing could be truer when it comes to streams. In this article, you will learn how a Stream avoids unnecessary work by not performing any computations on the source elements before a terminal operation is invoked and how only a minimum amount of elements are ever produced by the source.

You may also like:  A Guide to Streams: In-Depth Tutorial With Examples

Now that we are familiar with the initiation and construction of a Stream pipeline, we need a way to handle the output. Terminal operations allow this by producing a result from the remaining elements (such as count()) or a side-effect (such as forEach(Consumer)).

Let's look at what terminal operations we can apply to the end of a Stream pipeline:

A possible use case of a stream could be to update a property of some, or all, elements or why not just print them out for debugging purposes. In either way, we are not interested in collecting or counting the output, but rather by generating a side-effect without returning value.

This is the purpose of forEach() or forEachOrdered(). They both take a Consumer and terminates the Stream without returning anything. The difference between these operations simply being that forEachOrdered() promises to invoke the provided Consumer in the order the elements appear in the Stream whereas forEach() only promises to invoke the Consumer but in any order. The latter variant is useful for parallel Streams.

In the simple case below, we print out every element of the Stream in one single line.

A common usage of Streams is to build a "bucket" of the elements, or more specifically, to build data structures containing a specific collection of elements. This can be accomplished by calling the terminal operation collect() at the end of the Stream, thus asking it to collect the elements into a given data structure. We can provide something called a Collector to the collect() operation, and there are a number of different predefined types that can be used depending on the problem at hand. Here are some very useful options:

We can collect all elements into a Set simply by collecting the elements of the Stream with the collector toSet().

Similarly, the elements can be collected into a List using toList() collector.

In a more general case, it is possible to collect the elements of the Stream into any Collection by just providing a constructor to the desired Collection type. Example of constructors are LinkedList::new, LinkedHashSet::new, and PriorityQueue::new

Since an Array is a fixed size container rather than a flexible Collection, there are good reasons to have a special terminal operation, toArray(), to create and store the elements in an Array. Note that just calling toArray() will result in an Array of Objects since the method has no way to create a typed array by itself. Below, we show how a constructor of a String array can be used to give a typed array String[].

We might want to extract information from the elements and provide the result as a Map. To do that, we use the collector toMap(), which takes two Functions corresponding to a key-mapper and a value-mapper.

The example shows how different animals can be related to the number of distinct characters in their names. We use the intermediate operation distinct() to assure that we only add unique keys in the Map (If the keys are not distinct, we have to provide a variant of the toMap() collector where a resolver must be provided that is used to merge results from keys that are equal).

(*) Note that the key order is undefined.

Sticking to the bucket analogy, we can actually handle more than one bucket simultaneously. There is a very useful Collector named groupingBy() which divides the elements into different groups, depending on some property whereby the property is extracted by something called a "classifier". The output of such an operation is a Map. Below, we demonstrate how the animals are grouped based on the first letter of their name.

Here is an illustration of the process: 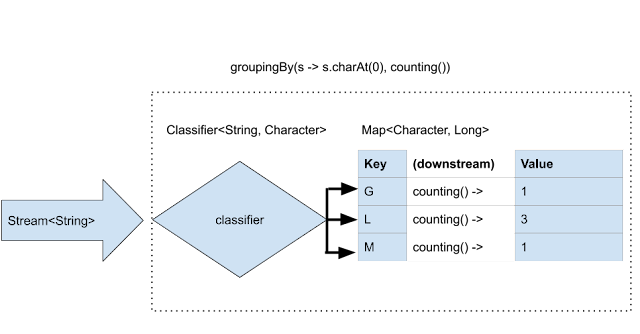 Any collector can be used as a downstream collector. In particular, it is worth noting that a collector groupingBy() can take a downstream collector that is also a groupingBy() collector, allowing secondary grouping of the result of the first grouping-operation. In our animal case, we could perhaps create a Map<Character, Map<Character, Long>> where the first map contains keys with the first character and the secondary maps contain the second character as keys and number of occurrences as values.

The intermediate operation filter() is a great way to eliminate elements that do not match a given predicate. Although, in some cases, we just want to know if there is at least one element that fulfills the predicate. If so, it is more convenient and efficient to use anyMatch(). Here, we look for the occurrence of the number 2:

Several terminal operations output the result of a calculation. The simplest calculation we can perform being count(), which can be applied to any Stream. It can, for example, be used to count the number of animals:

Although, some terminal operations are only available for the special Stream implementations that we mentioned in the first article; IntStream, LongStream and DoubleStream. Having access to a Stream of such type, we can simply sum all the elements like this:

Or why not compute the average value of the integers with.average():

Or retrieve the maximal value with.max().

Like average(), the result of the max() operator is an Optional, hence by stating .orElse(0), we automatically retrieve the value if its present or fall back to 0 as our default. The same solution can be applied to the average-example if we rather deal with a primitive return type.

In case we are interested in all of these statistics, it is quite cumbersome to create several identical streams and apply different terminal operations for each one. Luckily, there is a handy operation called summaryStatistics(), which allows several common statistical properties to be combined in a SummaryStatistics object.

Hopefully, you are familiar with the format of the provided exercises at this point. If you just discovered the series or just felt a bit lazy lately (maybe you've had your reasons too), we encourage you to clone the GitHub repo and start using the follow-up material.

The content of this article is sufficient to solve the third unit, which is called MyUnit3Terminal. The corresponding Unit3Terminal Interface contains JavaDocs, which describe the intended implementation of the methods in MyUnit3Terminal.

The provided tests (e.g.Unit3MyTerminalTest) will act as an automatic grading tool, letting you know if your solution was correct or not. 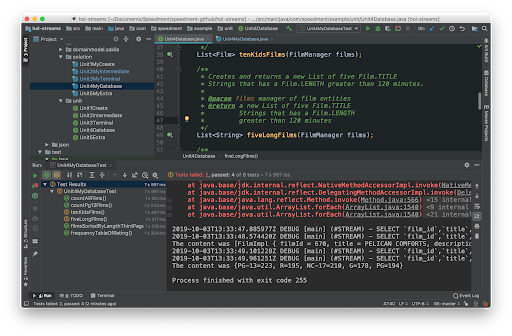 The next article will show how all the knowledge we have accumulated so far can be applied to database queries.