In this article you’ll learn how to containerize your Maven application into Docker Images and automatically generate and deploy Kubernetes Manifests with the help of Eclipse JKube’s Kubernetes Maven Plugin.

A Brief Introduction to Kubernetes

Kubernetes is an open source project, originally developed by Google, which is now managed by Cloud Native Computing Foundation. It surged in popularity in 2017 among people who were already using container technologies introduced by Docker. It’s an orchestration engine that underlies how operations staff deploy and manage containers at scale. For more detailed information about Kubernetes, you can checkout these articles:

All right, now that we know about Kubernetes. We can now take a look at the project which we’ll be talking about in this blogpost: Eclipse JKube. It is a project which you can use to package your applications into Docker Images and deploy to Kubernetes smoothly. It is the successor to famous Fabric8 Maven Plugin.

At Eclipse Cloud Tooling we have been focused on making Java developers’ experience smoother when it comes to creating, building, deploying and managing microservices on top of Kubernetes for some time. Most of the Java developers are used to application servers, creating deployment jars/wars, deploying then and running them in web application containers. They mostly use   their build tools like Maven/Gradle or their IDE to do most of the work.

We’ll now be taking a look at Eclipse JKube Kubernetes Maven Plugin and how it provides a similar developer experience on top of Kubernetes like you usually have with your application frameworks like  Spring Boot, Quarkus, Vert.x etc.

Setting Up Your Maven Project:

Do you have an existing maven project for your Java application? Maybe it’s a Quarkus or Spring Boot application; or a flat classpath, fat jar? If you don’t have a maven application, you can simply visit code.quarkus.io or start.spring.io and create one. You can also pick up a quickstart from Eclipse JKube quickstarts.

You can find latest version of Eclipse JKube on Maven Central as usual. To add Eclipse JKube Kubernetes Maven Plugin in your project you can simply add this section in your pom.xml like this:

Note that all Eclipse JKube Quickstarts already have Kubernetes Maven Plugin enabled so you can simply skip above step.

Now that we have Kubernetes Maven Plugin integrated into our project we can do something interesting stuff. Let’s take a short look the the goals this plugin provides. We’ll be taking a closer look at each of these goals later:

All right, let’s take a look at each of these goals in detail one by one:

Kubernetes Maven Plugin makes containerizing your Maven applications extremely easy. It allows building Docker images without providing any configuration with the help of it’s opinionated defaults. Of course, you can customize this very easily by allowing customization of image via XML Configuration or by providing your own Dockerfile.

To build Docker image of your application, just run the k8s:build goal(Default strategy for building images Is Docker so It requires access to a docker daemon):

This will create a Docker Image in the daemon you performed this goal against. You can check the image build using docker images command. If you don’t have access to docker daemon, you can change build strategy to JIB like this:

It will generate a tar file for your image which can be copied and loaded in any other docker daemon.

2. Pushing Image to a Registry:

Once you’ve build an image, you might want to push it to a remote registry like DockerHub or Quay. You can easily achieve this with Kubernetes Maven Plugin. Before doing it, you need to make sure that the image you’ve build is correct ${registry}/${user}/${image-name}:${tag} format. If you’re providing your own XML Configuration for building image, you can simply change image name by changing name section like this:

You can check these in detail in Kubernetes Maven Plugin Authentication Docs.

In order to push image to specified registry, you can go ahead and use k8s:push goal:

Or if you had built your image with JIB build strategy, you can do:

Kubernetes Maven Plugin also automatically generates opinionated Kubernetes Manifests by inspecting your project’s dependencies. Of course, it can easily be customized by providing your own manifests or small portions of YAML in src/main/jkube directory, For more information check out plugin documentation about Resource Fragments.

In order to generate Kubernetes Manifests, you just need to run k8s:resource goal:

This would generate Kubernetes manifests which would be available in target/ directory, as shown in listing below:

You can use Kubernetes Maven Plugin’s deploy goal in order to apply the Kubernetes YAML manifests generated in previous step on top of Kubernetes Cluster. You just need to be logged into a Kubernetes cluster. If you want to make whole deployment to Kubernetes a single step operation you can bind various goals like this:

Then you can deploy your application in just one step using k8s:deploy goal:

This will build your java code and run your unit tests, generate the docker image, create the kubernetes manifest and deploy them into kubernetes.

To remove your application from kubernetes just use the k8s:undeploy goal:

If you wish to get the log of the app and then terminate immediately then use this option:

This will use the default Java remote debugging port of 5005. You can also specify a different port if you want:

Once goal is up and running, a debug port would be opened on your laptop(localhost) which then connects using Kubernetes Pod Port forwarding to your latest application Pod.

You can add a debug execution in IntelliJ like this: 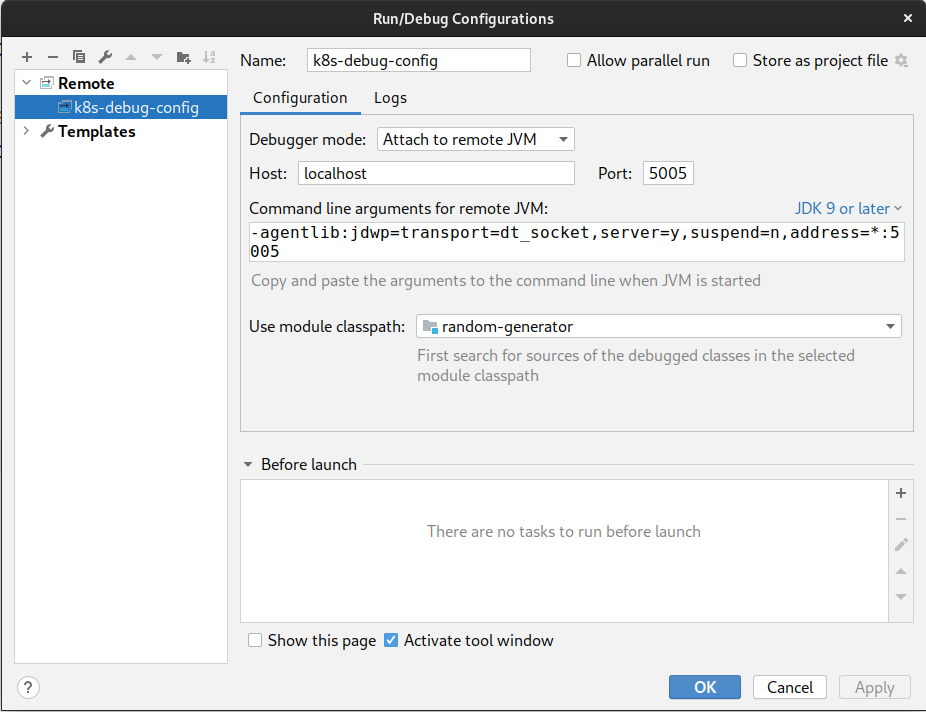 This concludes the overview of common Kubernetes Maven Plugin goals.  There are other goals too like k8s:helm and k8s:watch But we won't be covering them in this blog.

You can watch these short YouTube videos in order to see this plugin in action:

You can also checkout our Getting started course on Katakoda: https://katacoda.com/jkubeio

Please try out Kubernetes Maven Plugin and let us know via Community or via Issue Tracker .Are you interested in joining us to make this project better? Don’t be shy about joining our welcoming community: