The way mobile apps are developed has dramatically changed over the past decade. Mobile apps were built using native technologies like Android and iOS and then came mobile frameworks like Titanium and PhoneGap that allowed JavaScript developers to build hybrid mobile apps with a sustained framework limitation. Ever Since RubyMotion was released, Ruby developers have been building cross-platform native apps for iOS, Android, and OS X using the Ruby language alone, without any framework limitations.

An important skill to have when creating Android applications is to have an understanding of Java programming, the required Java packages, and the Android SDK. Learning this narrow set of skills could be challenging for someone new, and the Ruby language has a solution for Ruby developers or someone new wanting to learn the Ruby language in the form of RubyMotion.

What is RubyMotion? It's a Ruby language implementation that is compiled to run on iOS, OS X, and Android supported devices with a unified runtime approach and optimized binary support using an ahead-of-time static compiler. RubyMotion also includes testing tools, interactive debugging support optimized and designed for embedded device constraints that can quickly be learned by Ruby developers.

RubyMotion is considered a combination of runtimes since it is tightly integrated with Android runtime and uses the command-line interface (CLI) to develop Android apps interactively. This article will make developing Android apps easier for Ruby developers, and make Android developers more productive. This article will take you through RubyMotion by developing an Android app that links movie names to Wikipedia; let’s call it Moviepedia. 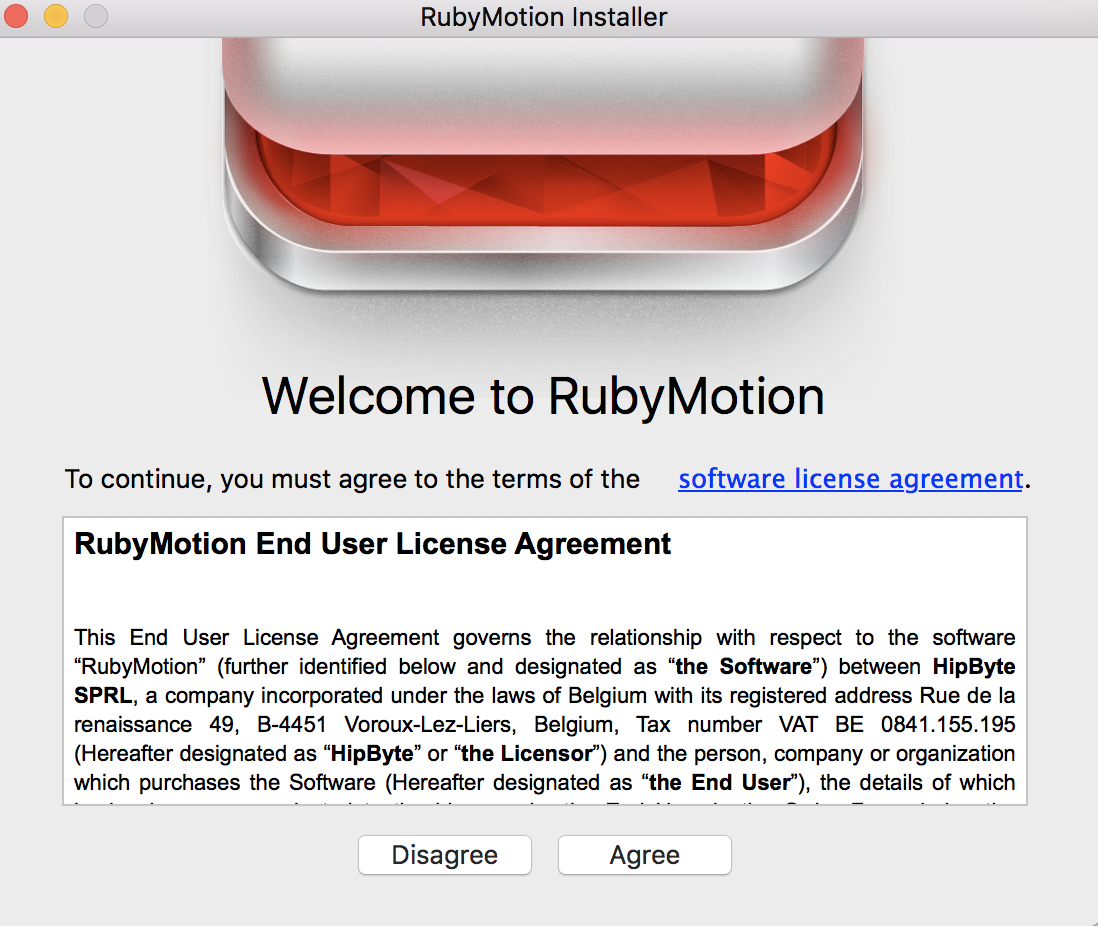 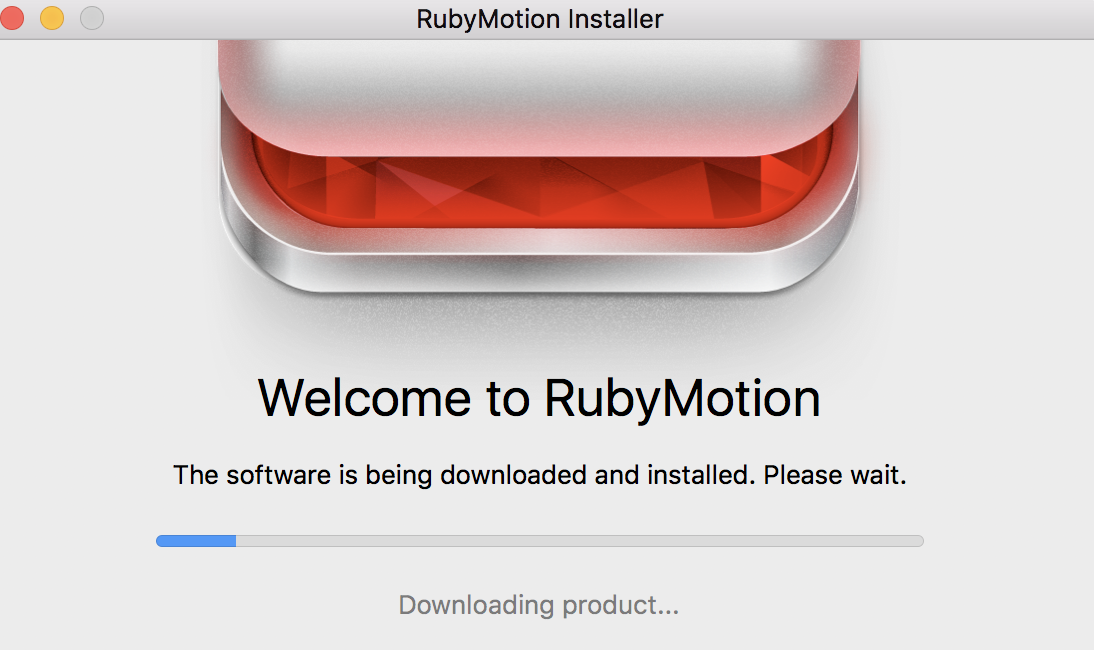 Look for the successful install confirmation before you close out the installer. 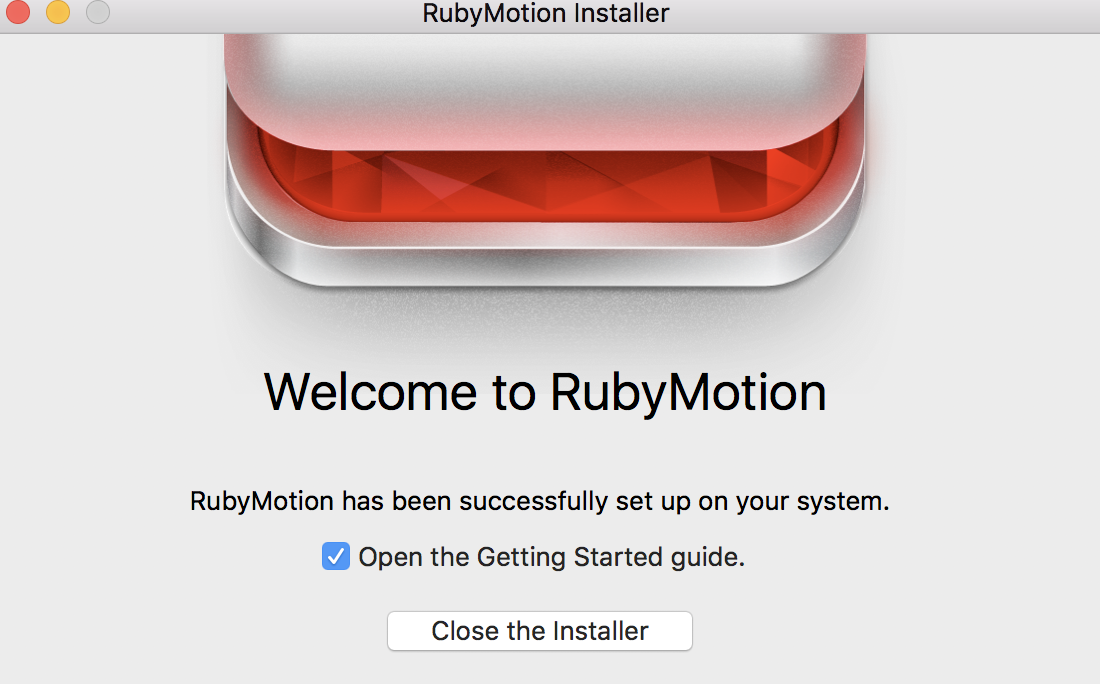 IF at any point you run into trouble, RubyMotion support is available on @RubyMotion’s Twitter account. Additional help and resources are available in case any assistance is needed from the RubyMotion community.

To verify that RubyMotion is successfully installed on your machine, run the following command:

If at any time you want to upgrade to a newer version:

The RubyMotion build system requires the Java compiler to be installed; follow these steps if you don’t have one installed. To verify Java is installed successfully, run the following command:

A single line command is used to set up the Android environment using the android-setup command. This will download both the Android SDK and Android NDK under the ~/.rubymotion-android directory and select the SDK version of your choice or pick the latest one if you are not sure. The Android SDK (Software Development Kit) provides a selection of tools to build Android applications which require Java to be installed as a pre-requisite. The Android SDK ecosystem contains the following for mobile app creation:

Now that we have the Android SDK and Android NDK installed, let’s start creating our new RubyMotion app, Moviepedia

After successfullly running these commands, you should see a creation action similar to the below screenshot:

Navigate to Moviepedia project directory using the cd Moviepedia from the current directory and let’s understand the files created. 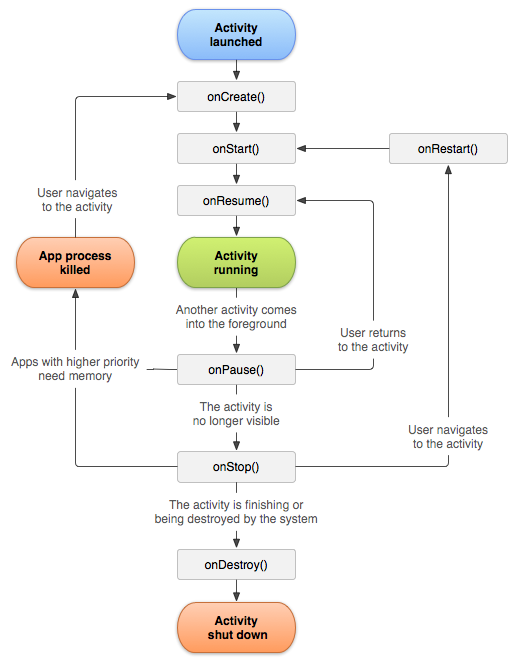 Since Rubymotion apps contain a Gemfile, all the required application dependencies mentioned in the Gemfile should be installed before running or building the app. Run the bundle command to install the Gemfile dependencies

Running a gemfile will create a Gemfile.lock which contains a snapshot of all the gem(s) along with their associated dependency versions.

The rakefile is the first file loaded by RubyMotion when the app builds initially with all the application properties and load configurations included. Check the default Rakefile with the application name mentioned in the App.Setup section.

Let’s fire up the terminal to understand the rake options. The rake config specifies the application defaults and is self-explanatory and customizable as needed.

You can specify the rake configuration if you want to modify and not stick to the defaults explicitly. Check some config examples changes below to provide custom values as configuration settings.

Run the rake command for the app to check if the app compiles, builds, and runs successfully on an emulator or device. To run the application on a device use the device command.

Now the rake device command should start the app. To understand more about the rake capabilities, you can run the various rake commands. Specifying the app to run on an emulator or a device will need additional settings needed, for the case of simplicity let’s run the application using RubyMotion’s default emulator.

The Android SDK comes with an emulator that can be configured via the command line or Android Studio (if this is your choice of IDE).

Follow the steps below to create an Android Emulator or Virtual Device (AVD):

Follow the steps below to create an Android Emulator or Virtual Device (AVD) using Android Studio. 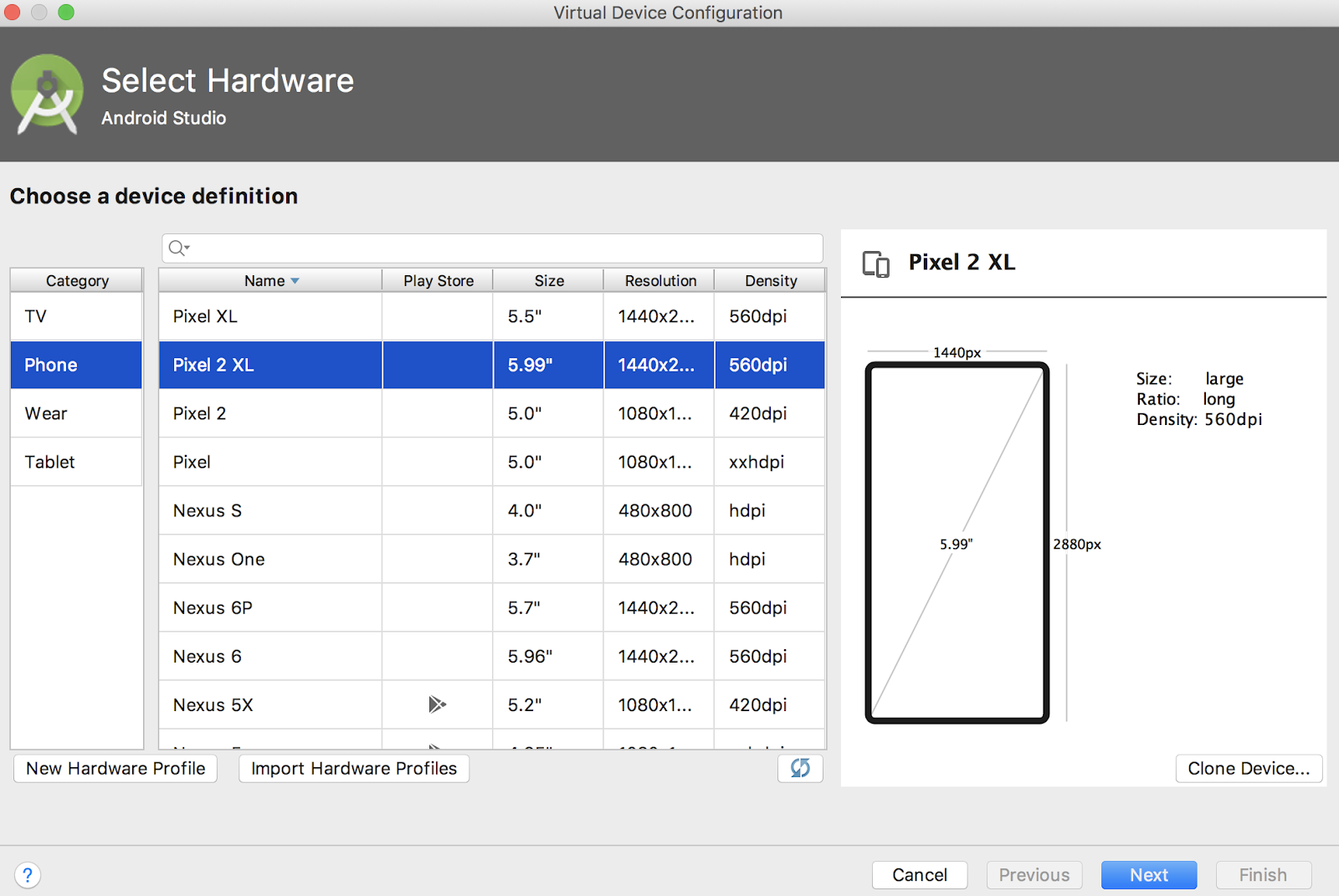 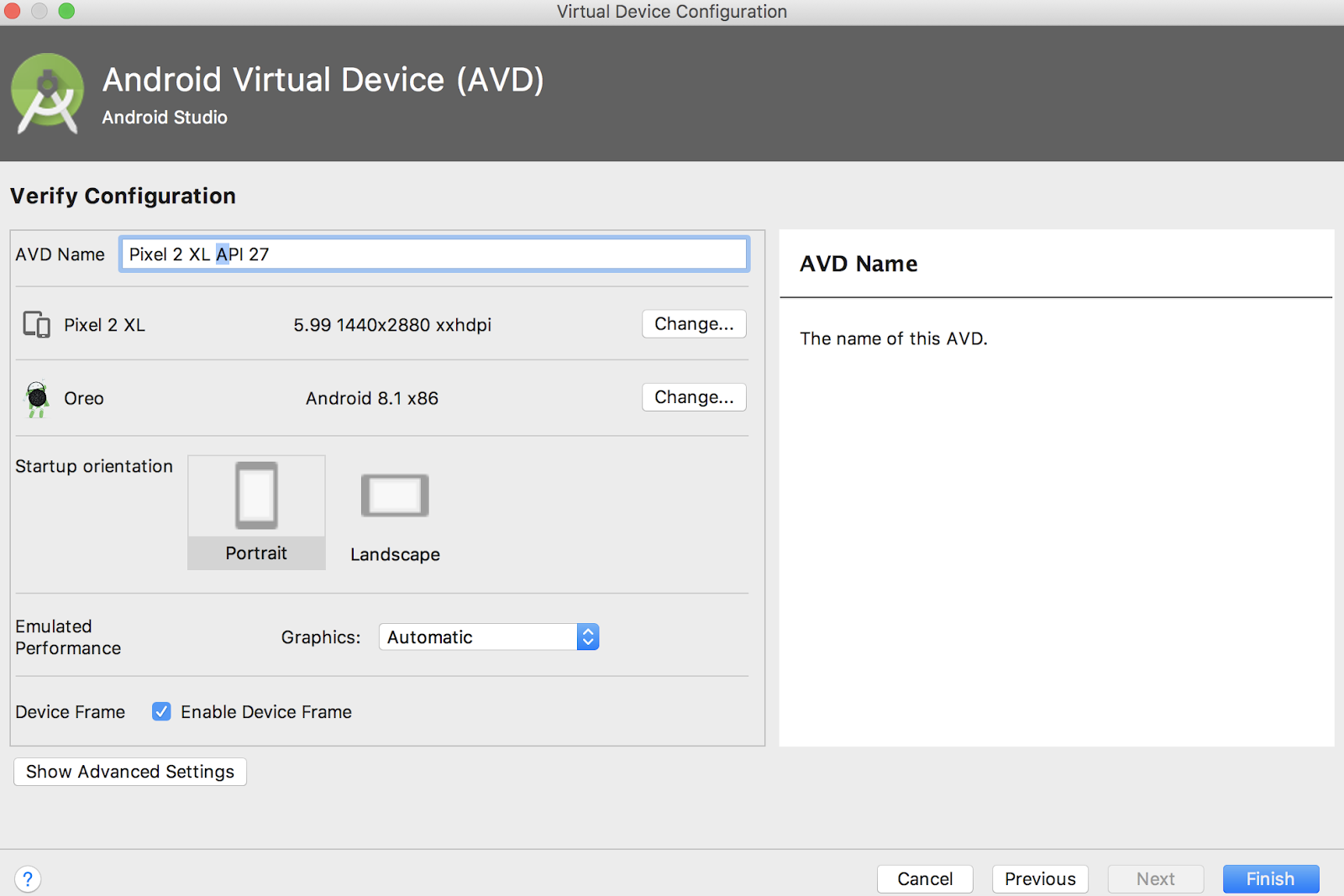 To run the application on an emulator use the emulator command.

Now we have a clearer understanding on RubyMotion, Rakefile, and, of course, our application is off to a great start with an unbeaten run on an Android emulator. Let’s keep the application rolling.

RubyMotion did the heavy lifting by generating the needed skeleton for our application. Now, let’s spice up the application by adding a list of movies and linking them to the Wikipedia page.

Create a new file app/movies.rb with Movies class to add an array of movie names.

Ruby provides a shortcut to list an array of strings with a %w literal instead of using a traditional array presentation with comma separated double-quoted strings. As an example, the traditional way of writing an array would look like:

The movie_names array can be rewritten using the %w literal:

Now, let’s change the shape of the Movies class by adding a list of movies inside the names method.

We have the Movie list ready, so let’s create a adapter to access the Movie names from the MainActivity.

Loading the movie names on the initial app load works well with ListView and ArrayAdapter using AndroidLayout to choose a list item layout. Now let’s add the click listener event to identify the movie name the user clicked on.

Passing the parent, view, and position to ItemclickListener will identify the selected movie position and to any intent activity after the click event is triggered. The intent is a message passed between activities, services, broadcast receivers, and content providers, in other words, it is similar to the parameters passed on to an API call asynchronously. In our application, this will make a call to Wikipedia and pass the movie name asynchronously.

Use Android::Context::Intent to create a new intent which can be pointed to a subActivity; let’s name the subactivity wikipediaActivity. Let’s create a new file called wikipedia_activity.rb.

Every Activity created should have an onCreate state similar to the main activity and our goal here is to make the SelectedMovie data pass to the onCreate method and load the Wikipedia link.

We have the wiki link with the movie name embedded at the end of the link, and in order for our activity to access the internet and load webpages, Android provides a WebView as part of Andorid::Webkit. Add the permission to the rake file specifying the permissions of rake config.

Permission is granted to access the webpage, so let’s write logic to load Wikipedia.

Here’s how the onCreate state flow for the wikipedia_activity.rb file should look:

Accessing the Wikipedia activity from the Main Activity to tie the Movie name link to load the Wikipedia URL is the final step in the process. We'll use the intent mechanism explained above.

Let’s rewrite the MainActivity class to have more readability and structure.

Here’s the link to the working app on GitHub.

In this article, we learned RubyMotion by building a Moviepedia app with some Android SDK calls using the power of the Ruby language and the Rake build language. We could have built the app using Android native app or Phone Gap hybrid development; however, once you have a good understanding of Ruby and it’s simplicity to build web apps, RubyMotion feels like an extension to your learning with no or little learning curve.

If you want to dive deeper into RubyMotion Development, check out “RubyMotion Android Development” to understand and see if RubyMotion is right for your Mobile Development needs. Rubymotion might not be a perfect option if you are worried about Memory management or Debugging capabilities. On the brighter side, the Ruby Open community is pretty good in addressing the concerns, thanks to the open source world.