In my previous two articles, I wrote about docker basic and docker-compose where we deployed real applications to a Docker container with Docker CLI and docker-compose. In the first article, we used Dockerfile to set up our environment and deployed the application by running containers separately and then built a link between each of them.

In the second article, we ran multiple containers with the docker-compose tool. But for scaling and high-availability, we need to run our application on multiple host machines with cluster facilities. For orchestrating distributed systems at any scale to gain scalability and high availability, Docker has its own implementation called Swarm. Swarm uses the SwarmKit library for orchestration.

We have already learned some important terms about Docker, containers, images, etc. Now, we will try to deploy an application with scalability. In Docker terms, Swarm orchestrates a large number of hosts and maintains scalability and high availability.

Some key terms of Docker Swarm are listed below:

Manager Node: This node is responsible for maintaining Swarm orchestration. It manages the cluster environment.

Worker Node: This node is responsible for executing tasks defined by the Manager Node. It will always notify its state to the Manager Node and provide services that is assigned to it.

Service: These are the tasks that execute on the Manager or Worker Node.

We discussed Docker CLI and Docker-Compose in my previous two articles with real projects. Now, we will practice deploying an application in multiple hosts/VMs on a single machine using Docker Swarm. Before that, we will check Docker information with the command, docker info. In my case, it returns the following snapshot: 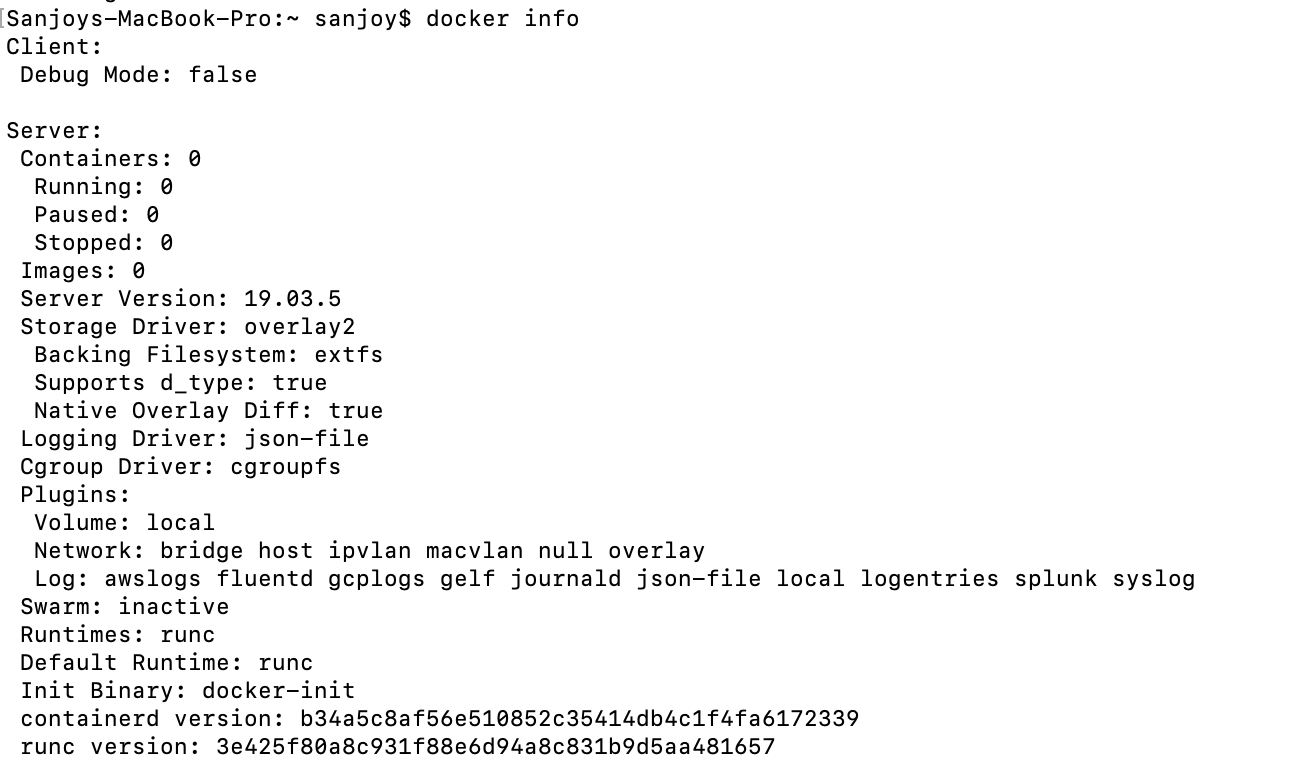 Now, we will create three Docker machines. One is for the Manager Node, and the two others are for Worker Nodes. To do this, we will use the following commands:


By executing the previous command, we have created a Manager Node. Similarly, we will create two worker nodes/machines.

The docker-machine env manager command will show the environment information for the Manager Node. In my case, it returns:


We should run the  eval $(docker-machine env manager) command to configure our shell. Then, we can get our two Worker Nodes with the following commands:

After executing this command, we should check the created machines by executing the docker-machine ls command. In my case, the output from that command looks like this:


Now, if we run docker node ls, it will return the following message:

Error response from daemon: This node is not a swarm manager. Use "docker swarm init" or "docker swarm join" to connect this node to swarm and try again.

In your case, the IP address will be the Manager Node IP address. In my case the command returns:


Now, we should login to the other two worker machines using ssh and run the docker swarm join command that was returned as a swarm init command response instruction.

In both workers, we will execute:

Now, we will again ssh to the manager machine and execute the docker node ls command. In my case, it returns:

Here, we can see that MANAGER STATUS is the Leader for the Manager Node. We can run and see any information on Docker from this node but not from our Worker Nodes.

We will only install MySQL in the Manager Node. We will skip database clustering. I think our shell, is using a manager environment. So, we can follow the Setup MySQL part of my first article and run the following command:


After we run the container, we will import our SQL script by running the following command. We can get the script file from here.

If we want to test our MySQL setup or details of setup, please check the Setup MySQL part of  this article.

To deploy the application, we need to clone the project from here. Now, we will move to the project's root directory (book_manager) and then checkout to the branch, docker-swarm. After that, we need to update the datasource at application.properties. We will update the following IP with our Manager Node's IP.

Now, we will run the gradle clean build command to build this project.


Here, we can see that I used flopcoder/book_manager as the image name. We have to update our own Docker Hub id. After build completion, we will run docker-compose build to build our Docker images.

In my case, it returned:


It will take some time to deploy images to all Swarm nodes. You can check the log using the following command:

We can also scale up our deployment with following command

After that, we will check the running scaled containers on different nodes:

After waiting some time, you can hit the following URLs:

All three nodes will return the same author list.

We can configure a visualizer service using the following command: 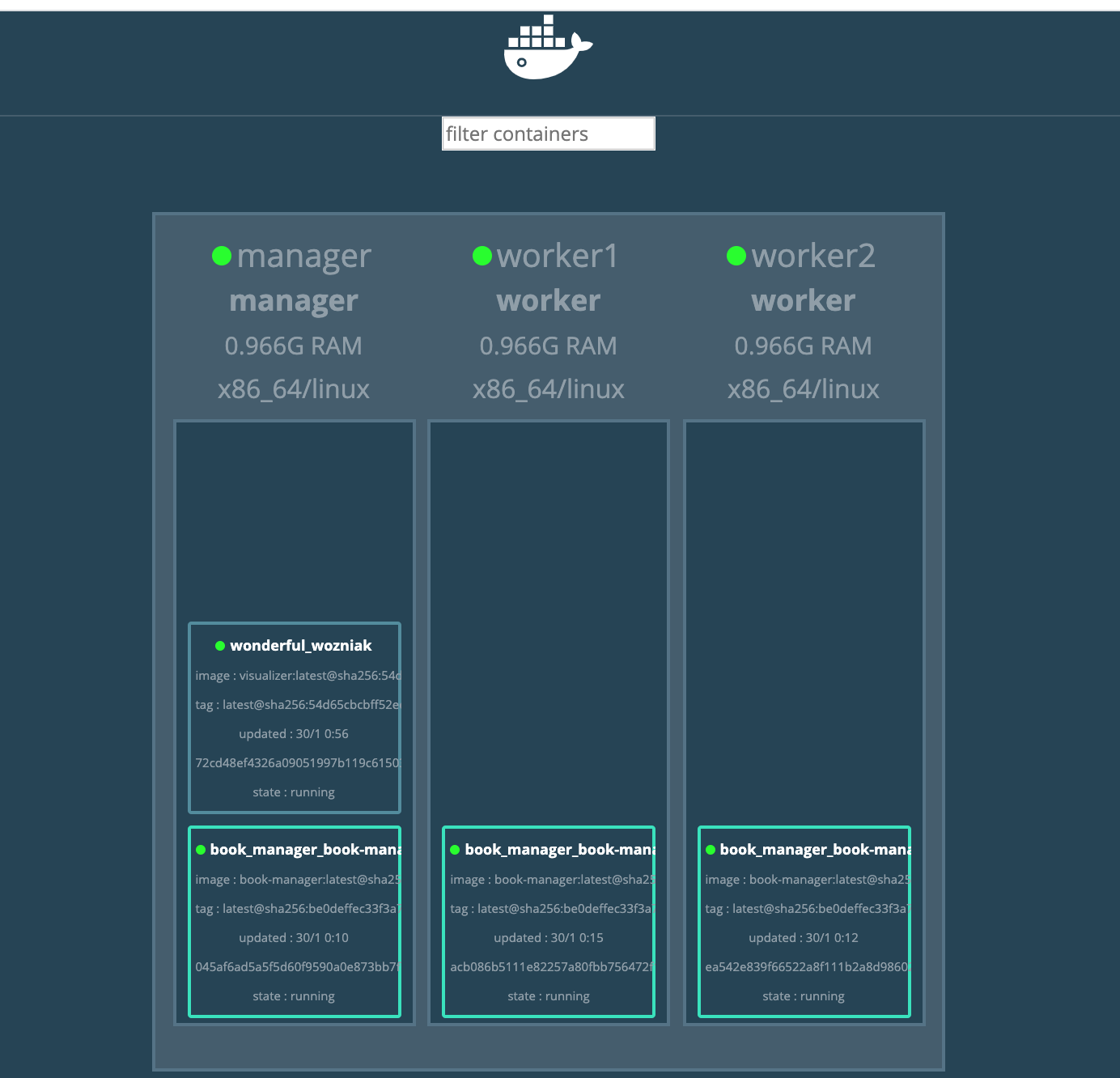 I think that's all you need to get started with Docker Swarm with Spring Boot and MySQL. Thanks so much for reading!

NB: In this article, I have used IP of my host machines' VM. You have to change it to yours.