In some cases, the RAML schema definition can't be possible. Like if the project wants to re-use the old JSON Schema to validate the incoming payload in the Mulesoft project (to migrate from other ESB). Also, if the single API endpoint is going to deploy for many countries and for each country we have a separate JSON Schema.

In such requirements we can use Dynamic JSON Schema validation, which means based on the country (present in input payload), it will load the country-specific JSON Schema and perform validation of incoming payload. Additionally, if the project wants to add/remove/update the schema frequently, we don't have to change the validation code. Just adding/replacing the JSON schema in a specific format in the proper directory and append the newly added country in the property file (if new addition) will be enough. 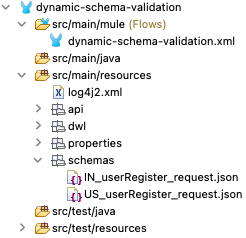