To make a vector search more intuitive and convenient, we introduced TableFile and metadata in Milvus.

In this article, we will mainly describe how vector data are recorded in the memory of Milvus, and how these records are maintained.

Below are our main design goals:

Therefore, we have established a memory buffer (insert buffer) to insert data to reduce the number of context switches of random I/O on the disk and operating system to improve the performance of data insertion. The memory storage architecture based on MemTable and MemTableFile enables us to manage and serialize data more conveniently. The state of the buffer is divided into Mutable and Immutable, which allows the data to be persisted to disk while keeping external services available.

When the user is ready to insert a vector into Milvus, he first needs to create a Collection (* Milvus renames Table to Collection in 0.7.0 version). The collection is the most basic unit for recording and searching vectors in Milvus.

Each Collection has a unique name and some properties that can be set, and vectors are inserted or searched based on the Collection name. When creating a new Collection, Milvus will record the information of this Collection in the metadata.

When the user sends a request to insert data, the data are serialized and deserialized to reach the Milvus server. Data are now written into memory. Memory writing is roughly divided into the following steps: 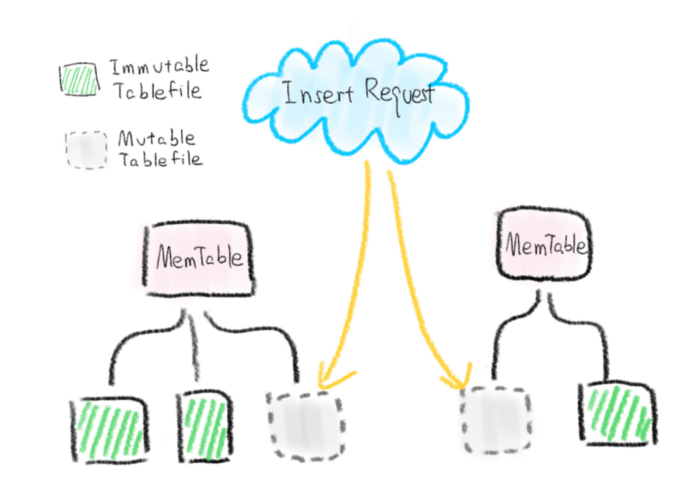 Through MemManager, MemTable, and MemTableFile multi-level architecture, data insertion can be better managed and maintained. Of course, they can do much more than that.

In Milvus, from the data are recorded in the memory, to the data can be searched, you only need to wait for one second at the fastest. This entire process can be roughly summarized by the following picture: 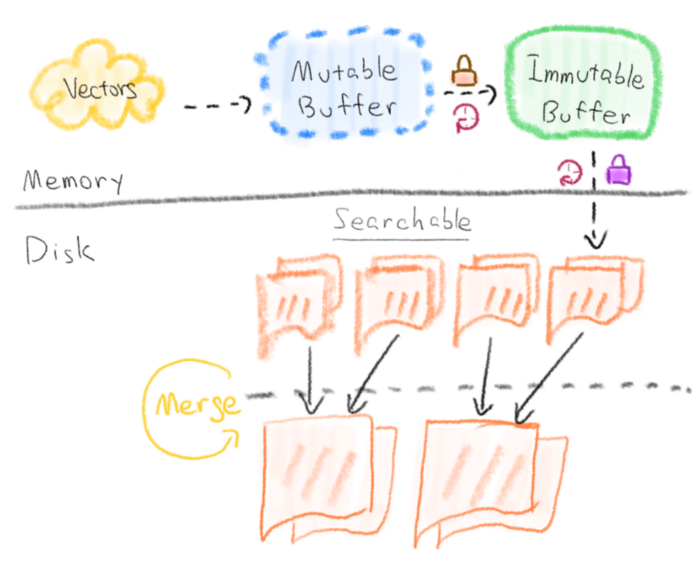 First, the inserted data will enter an insert buffer in memory. The buffer will periodically change from the initial Mutable state to the Immutable state in preparation for serialization. Then, these Immutable buffers will be serialized to disk periodically by the background serialization thread. After the data are placed, the order information will be recorded in the metadata. At this point, the data can be searched!

Now, we will describe the steps in the picture in detail.

The next step is to serialize the MemTableFile in the serialization queue to disk. This is mainly divided into three steps:

First, the background serialization thread will periodically pull MemTableFile from the immutable queue. Then, they are serialized into fixed-size raw files (Raw TableFiles). Finally, we will record this information in the metadata. When we conduct a vector search, we will query the corresponding TableFile in the metadata. From here, these data can be searched!

With the help of TableFile and metadata, vector search becomes easier to use. In general, we need to get the TableFiles corresponding to the queried Collection from the metadata, search in each TableFile, and finally merge.

Lastly, if you want to know more, here's the code: https://github.com/milvus-io/milvus.