To run the host in development mode call the UseEnvironment method on the builder and set it to development. It increases the queue polling interval, sets log level to verbose, etc., and makes development more efficient.

Azure Functions is also built on the WebJobs SDK, and both have a lot in common. To add a Job, we add a 'Function.'

The HostBuilder that we created is the container for these functions. It listens to various Triggers and calls the functions.

Triggers define how a function is invoked, and a function must have exactly one trigger.

Check this article for the full differences between Azure WebJobs and Azure Functions.

The above function is triggered every time a message is dropped in the Azure Storage Queue with the name 'queue.' The function reads the message and drops it back to another queue named 'processed.' It adds a Processed text and the date and time it was processed.

Since we are not much interested in what the function is doing, let's move to set up the Build/Deploy pipeline for this Azure Function. I have a sample pipeline set up here (details at the bottom of the post) in case you want to refer to it at any step. You can also check out the video above for the full setup walkthrough.

When setting up the build/deploy pipeline, I prefer to set it up as two separate pipelines. 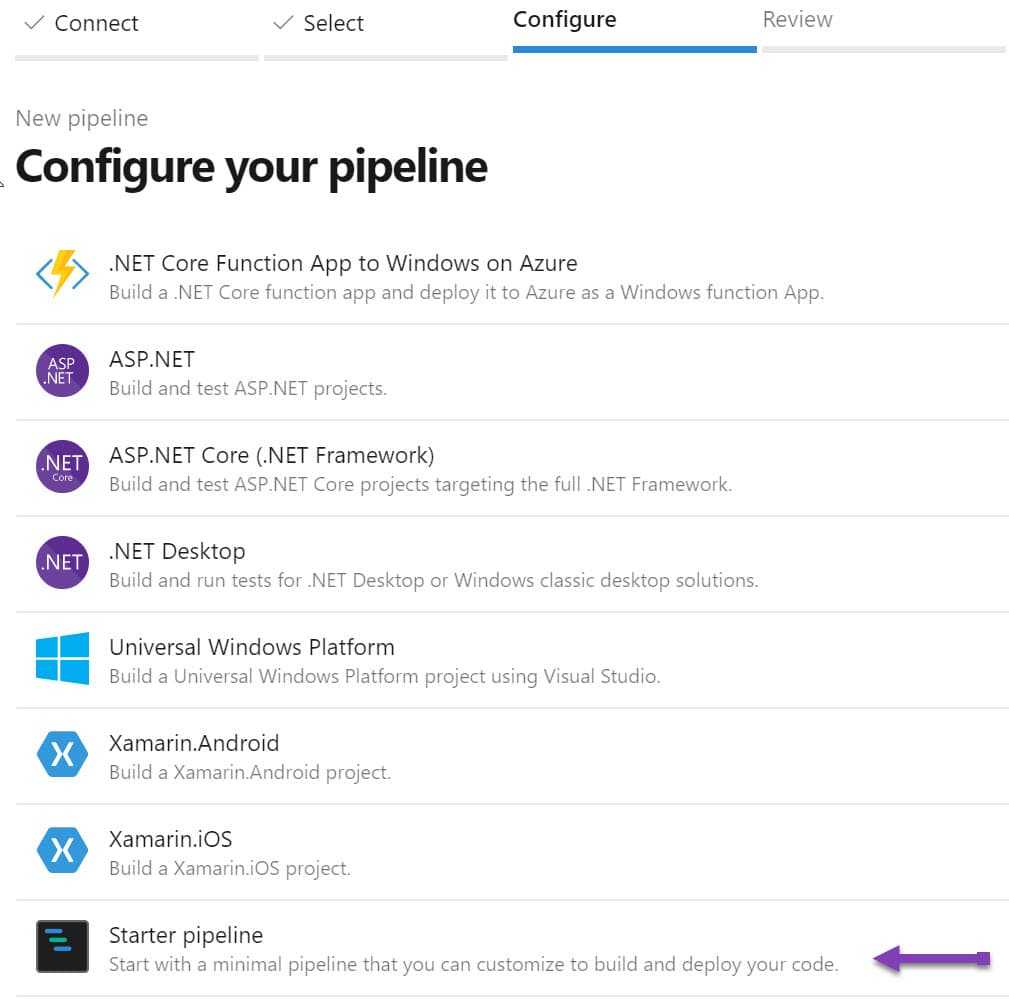 Select 'Starter pipeline' from the template options, which will help set up the template from scratch. Clear off everything under the 'steps' section in the yml file.

In the build pipeline, we need to achieve the below.

Build and Publish The Project

For both the tasks we pass in a wildcard selector for the csproj, since we only have one project in the whole repository. If you have multiple projects, make sure to provide the WebJobs project file's name just to build that. ('WebJobExample.WebJob' in this case).

The 'publish' task, has a specific folder structure (App_Data/jobs/continuous/YoutubeWebJob) as the output folder. It is by convention, and Azure expects WebJobs to be in that folder structure in the webserver (IIS). Depending on whether the WebJob is continuous (App_Data/jobs/continuous) or triggered (App_Data/jobs/triggered), the build artifacts need to be placed appropriately. To enable multiple WebJobs under the same server, we can add them under a Folder inside the expected folder paths, like \_YoutubeWebJob folder above.

The trigger word with both the folder and the QueueTrigger (for example) can be slightly confusing. Any job that is manually triggered or run based on a cron expression goes under the 'triggered' folder. All other WebJobs should be under the continuous folder. In this example, since it is a QueueTrigger job, we need to keep running continuously and get triggered whenever a message is dropped in the queue. So it needs to be deployed under the continuous folder.

To archive the build output, you can either specify the zipAfterPublish to true in the dotnet core CLI task step above or add a separate step as shown below.

The below step uses the Archive Files Task and Publish Build Artifacts Task.

On saving the pipeline file, it will commit to your repository with the specified filename (azure-pipelines.yml). We now have our build pipeline, which creates a build artifact, a zip file with the console application executable (the Web Job), and the associated DLL's.

Azure Web Jobs are deployed to Azure Web app either independently or as part of the Web App that it lives under. In this example, it is getting deployed independently. If you want to package it along with a Web App, you can update the build pipeline to generate the Web App to the '(Build.BinariesDirectory)/publish_output' folder. Check out an example here where I build and deploy a Create React Application

To create a new Release Pipeline, go to the Releases section under Pipelines in Azure DevOps, as shown in the image below (1). 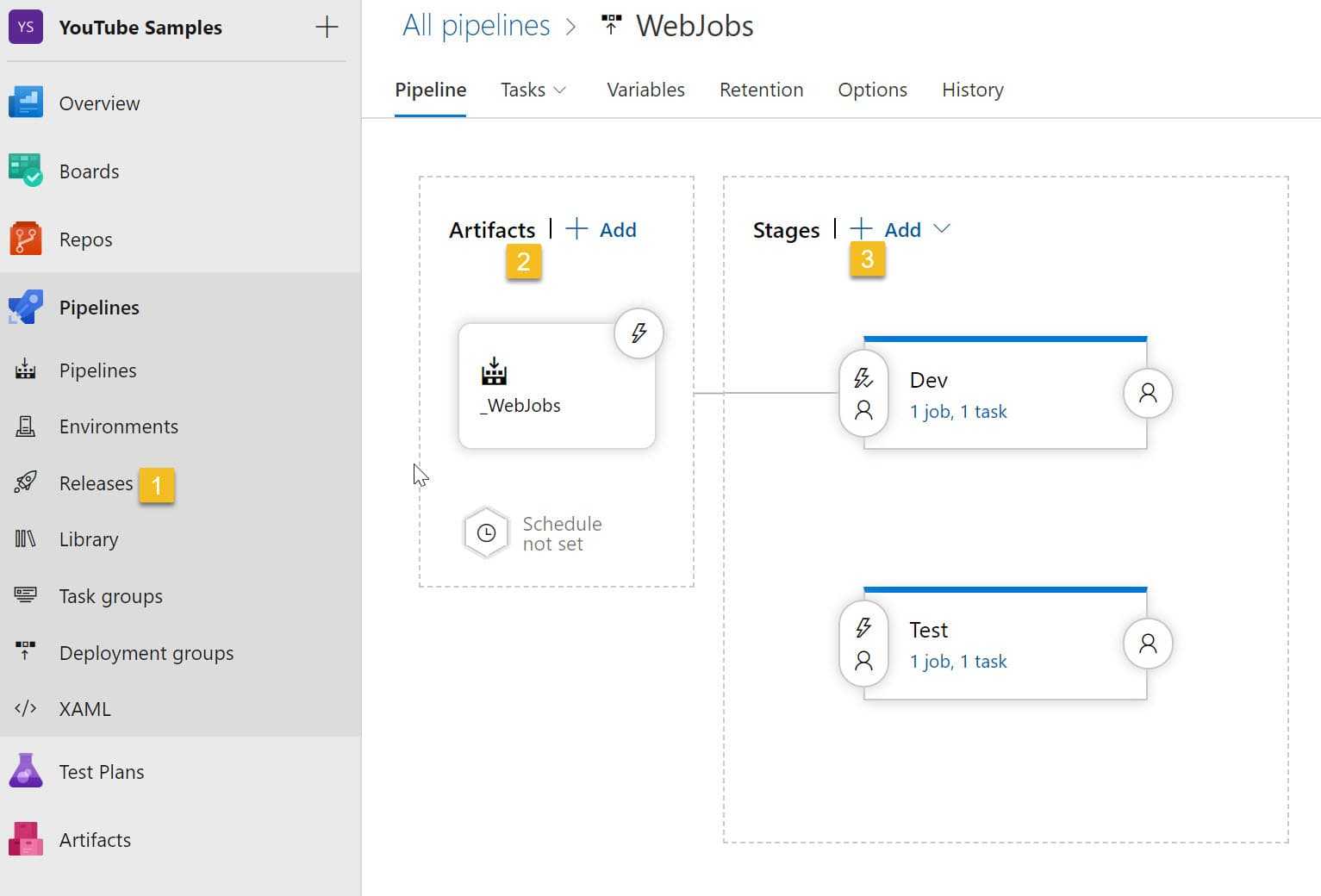 Select the Artifact that you want to deploy (2). In this case, choose the build pipeline that we created in the previous step.

Stages in the Release pipeline represent the different environments that you want to deploy your application. In the example above, I have added two stages - 'Dev' and 'Test.' Any time a release is created, it is automatically deployed to the 'Dev' environment. You can manually deploy it to the next stage ('Test') when you have the code ready for Testing. 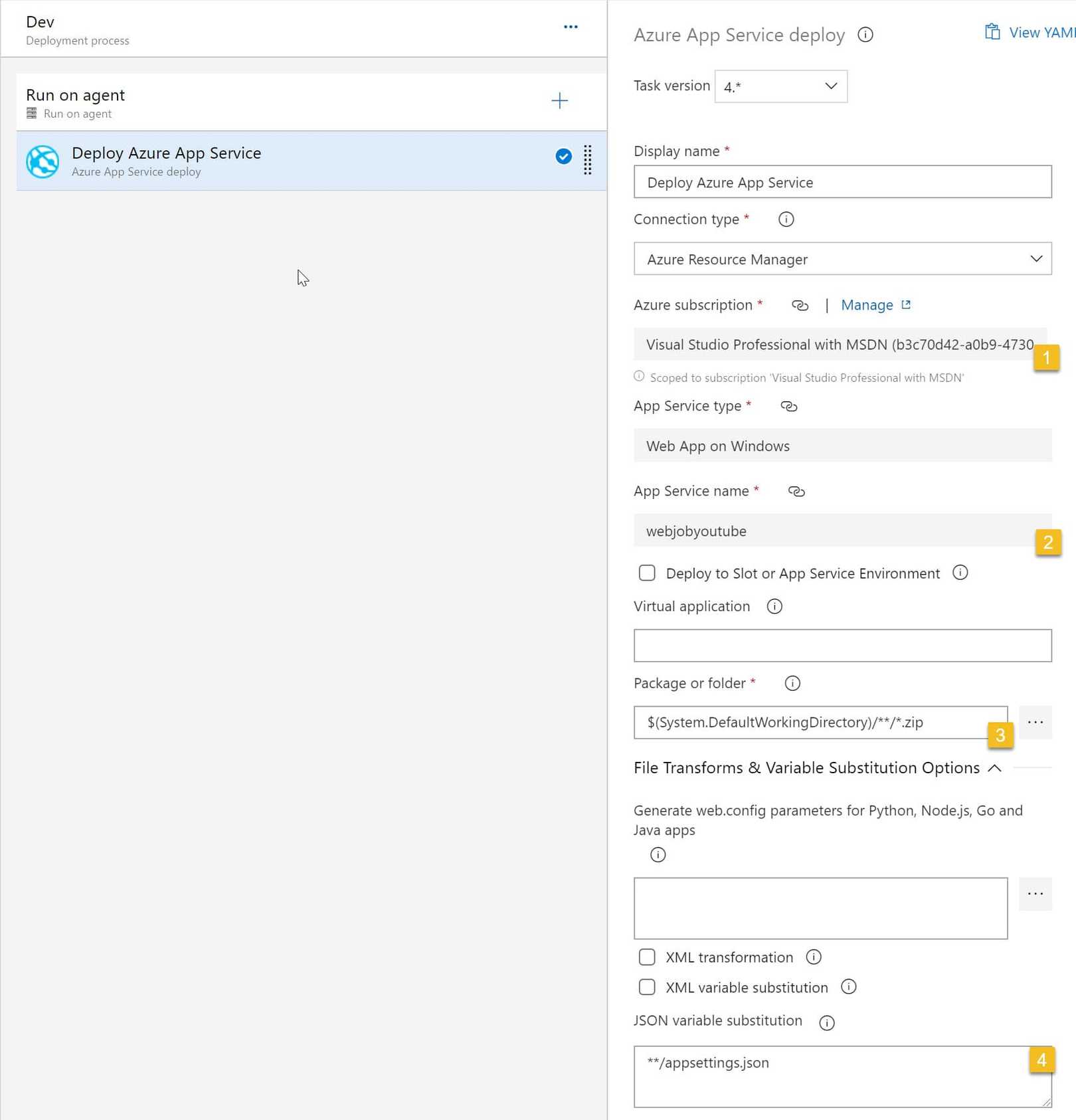 The 'Dev' and 'Test' stage has a single task in it - Deploy Azure App Service Task. You can specify the Azure Subscription (1) to which the WebJob needs to be deployed to, select the App Service name (2). The package or folder path specifies the path to the artifact. When a release is created, the linked artifact is automatically downloaded to the '\$(System.DefaultWorkingDirectory)' by DevOps. The zip file that we published as part of the build pipeline will be available in this location.

Depending on the environment you are running, the WebJob will connect to different resources. Add these values as Release Variables to your Release pipeline. To replace this in the configuration file, use the 'File Transforms & Variable Substitution Options' and specify the 'appsettings.json' file name. DevOps will automatically replace variables that match the name in the file with that in the Release Variables.

The Azure WebJobs deployment is successfully set up. Trigger a new build, which should automatically trigger a new release and deploy it to the Web App that you have selected for the environment.

Find the related source code and the build/release pipeline below.

Hope this helps you set up a new Azure WebJob and configure the build/deploy pipeline in Azure DevOps.

Published at DZone with permission of Rahul Nath. See the original article here.