What Are X.509 Certificates?

X.509 certificates are part of the public key infrastructure that has components and policies for creation, storage, and management of digital certificates. Connected to the TLS protocol, they are proven technologies in the security architecture.

Public Key Infrastructure (PKI) is complex and may include a number of CAs of a certain hierarchy, responsible for creating and managing the certificates. They may service a lot of clients that use certificates to establish a connection and sometimes to encode traffic to network resources.

For instance, corporate systems, billing systems, and e-banking systems might all use X.509 certificates for security assurance, and one may consider that a flow of OCSP requests from servers or clients for the discovery of the certificates’ statuses can represent a significant load for a CA.

The OCSP protocol works per request-response basis and uses the HTTP protocol as transport. A client or server generates the OCSP request and sends it to the server, responsible for processing such requests. The latter receives this request, checks the certificate status, generates the OCSP response and transmits it back to the requested party. According to the RFC 6960 that describes OCSP, the OCSP requests are transmitted in the encoded form in the body of the POST HTTP request. The OCSP responses are transmitted in the body of the corresponding HTTP response and have to be digitally signed.

The structure of the OCSP request is simple. It consists of the protocol version number, type of requested service, one or a few certificates identificators and several extended parameters. The latter may include the hash codes of the name and the open key of the certificate issuer and the certificate serial number. The OCSP request is composed in the ASN.1 notation and DER encoded before it is placed in the body of the HTTP request.

The OCSP response consists of the certificate identificator, certificate status (good, revoked, or unknown), validity period, and other optional parameters. It’s DER encoded and written in the ASN.1 notation as well.

JMeter can load test OCSP responders or services responsible for providing certificate statuses, by checking the status of X.509 certificates. The JMeter script takes each certificate according to the provided path in the script, forms OCSP requests and turns them into HTTP requests that are directed to the OCSP responder. The responses are then decoded and analyzed.

The straight way for the script implementation is to use the BeanShell preprocessor with the HTTP sampler to compose an OCSP request and encode it. The BeanShell code has to form the ASN.1 notation of the OCSP request and encode it. The composition of the request is done with the help of the third-party Java library Bouncy castle, which is an open project.

Here’s how to do it.

Download the public key infrastructure and provider package files from the resource and place them to the /lib JMeter installation directory. As the certificate files are required to conduct the test, it’s necessary to provide a path to the certificate files, that will be used in the script.

In the filename field of this element, provide the path to the CSV file that contains a list of paths to the certificate files that will be used in the test. The usage of the CSV configuration element will allow you to use different certificates in each request and scale up the script later.

6. Add an HTTP Request Under the Thread Group

Add two values, as shown in the screenshot below:

8. Add a BeanShell PreProcessor as a Child Element

To add a BeanShell preprocessor as a child element to the HTTP request, right click on the HTTP Request > Add > PreProcessors > BeanShell PreProcessor.

The PreProcessor script is:

As shown in the screenshot below: 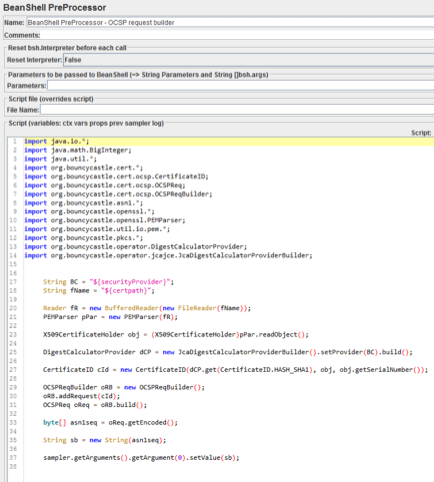 It’s necessary to add import directives to include classes of the downloaded Bouncy castle packages and the Java security provider class in the PreProcessor BeanShell code.

9. Add the BeanShell Assertion as a Child Element

To add the BeanShell assertion as a child element to the HTTP sampler, right click on the HTTP Request > Assertions > BeanShell Assertion.

The assertion script is:

The same Bouncy castle library is used here. We have to extract the body of the HTTP response, extract the OCSP response status, and assert against it. At the first approximation, we can stop at this step and don’t extract the certificate status itself.

Now, all you need to do it to scale the script up to the required amount of threads.

Congratulations! The script is ready. As you can see, it is not a long or complicated JMeter script. 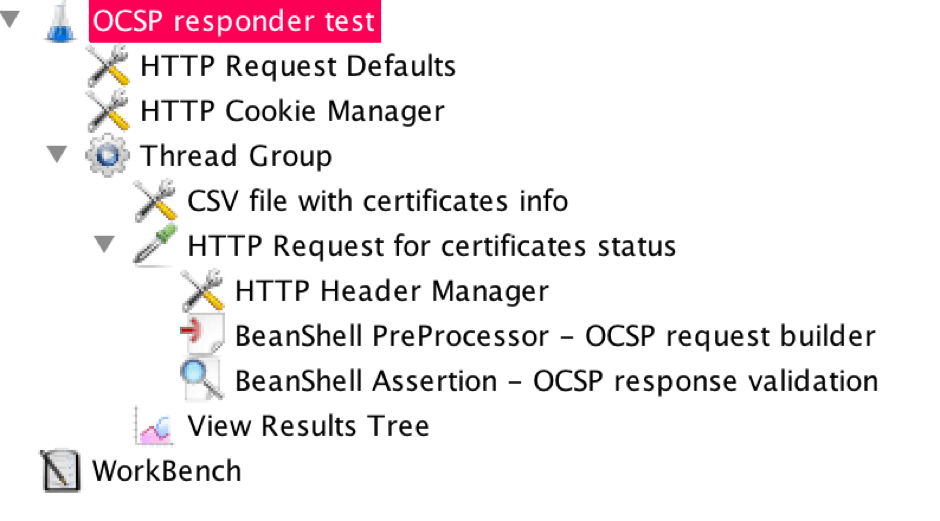 The way to build the script for testing OCSP responders demonstrated above is not the only one. There are other ways to complete this task. For example, the OCSP request may be generated in OS process sampler by calling an openssl application and passing to it parameters such as the certificate path and OCSP responder URI. The response of this request can be parsed and asserted in the BeanShell assertion and attached as a child element to this sampler. In order to do this, the openssl package has to be installed on the workstation or instance with the JMeter.