In this article, I will show how to perform statistical hypothesis test using Spark machine learning API (aka Spark MLlib). The  will be used to reveal the hypothesis testing with a step-by-step by example on the well-known Wisconsin Breast Cancer Prognosis (WBCP) dataset.

In statistics, the Chi-squared test can be used to test if two categorical variables are dependent, by means of a contingency table. However, before going into deeper, some background knowledge is mandated for them who are new to the area of statistical machine learning. Furthermore, a technical detail on the hypothesis testing using Kolmogorov-Smirnov (KS) test algorithm can be found in my previous article here.

What is Hypothesis Testing?

The process of differentiating between the null hypothesis and alternative hypothesis [3] is aided by identifying two conceptual types of errors – also called type 1 & type 2 errors. Additionally, a parametric limit is specified on how many type 1 errors will be permitted[1, 3]. One of the most common selection techniques is based on either Akaike information criterion or Bayes factor [1] algorithm. Consequently, hypothesis testing is useful as well powerful tool in statistics to determine:

How Is it Performed?

According to the documentation provided by Wikipedia [1], the following two types of reasoning are considered for performing the hypothesis test:

There is an initial research hypothesis for which the truth is always unknown. Now the below steps are typically iterated sequentially:

Note that, the assumption in step 2 is non-trivial since invalid assumptions will tend the results of the test invalid.

Here typically step 1 to 3 are iterated as an initial hypothesis as stated above. After that the following steps are performed:

Now to compute the p-value, here I describe two rules of thumbs based on several sources [1-3, 5]:

Similarly, a p-value of 0.01 means that there is only a 1% chance that this deviation is due to chance alone, which means that other factors must be involved that need to be addressed [5]. Note that the p-value may vary for your case depending upon the data quality, dimension, structure and types etc [2].

As already discussed that the current implementation of Spark (i.e., Spark 2.0.2) provides the hypothesis testing facility on the static as well as dynamic (i.e., streaming) data. Consequently, the Spark MLlib API currently supports Pearson’s chi-squared (χ2) tests for goodness of fit and independence for batch or static dataset.  Secondly,Spark MLlib provides a 1-sample, 2-sided implementation of the KS test for equality of probability distributions. That to be discussed in the next section.

The third type of hypothesis testing that Spark provides support is using the streaming data. The Spark MLlibprovides online implementations of some tests to support use cases like the A/B testing [8]. Theis test may be performed on Spark Discrete Streaming that takes the streaming of type Boolean and double –i.e., DStream[(Boolean, Double)] [5]. Where, the first element of each tuple indicates control group (false) or treatment group (true) and the second element is the value of an observation.

However, in this article, I will show hypothesis testing using the Pearson’s chi-squared (PCS) test algorithm implemented in Spark. However, the Kolmogorov-Smirnov (KS) test will be discussed in my next article.

Here is how the p-value is explained in Spark implementation (as Java-like pseudocode notation).

Here we get to know the outcome of the assumption against the p-value using the pValueExplain variable and its value changing over time and data objects.

At first, we need to prepare dense vector from the categorical dataset like Wisconsin Breast Cancer Prognosis (WBCP) dataset. The details of the attributes found in WBCP dataset at [4] are:

These values are observed at the time of surgery from the year 1988 to 1995 and out of the 198 instances, 151 are non-recurring (N) and only 47 are recurring (R). Figure 1 shows a snapshot of the dataset. However, real cancer diagnosis and prognosis datasets like COSMIC, ICGC and TCGA nowadays contain many other features and fields in structured or unstructured ways [6]. 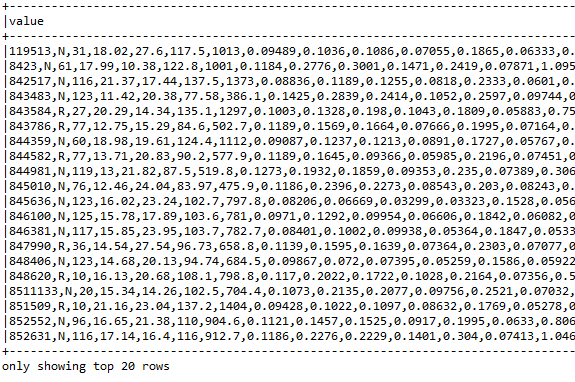 In this example, I will show 3 tests to explain how the hypothesis testing works using the PCS test:

The implementation of the UtilityForSparkSession class is as follows:

The following line of codes collects the vectors that we created using the myVector() method:

Where the implementation of the myVector() method goes as follows:

Now let’s compute the goodness of the fit. Note, if a second vector to test is not supplied as a parameter, the test run occurs against a uniform distribution automatically.

Now let’s print the result of the goodness using:

Since the p-value is very low (i.e., less than 5%) that is insignificance and consequently, we cannot accept the hypothesis based on the data.

To evaluate the test result, let's print the summary of the test including the p-value, degrees of freedom and the related statistic as follows:

We got the following statistic as summarized follows:

Well, we have constructed a contingency table from the raw (feature, label) pairs. Now let’s conduct the test as ChiSquaredTestResult for every feature against the label.

Now let’s observe the test result against each column (i.e. for each 30 feature point) using the following code segment:

From the above result, we can see that for some feature point (i.e. column) we got larger p-value compared to others. However, results vary on different columns. Readers are, therefore,  suggested to select the proper dataset and do the hypothesis test prior applying the hyperparameter tuning. There is no concrete example in this regard since the result may vary against datasets you have. Readers are also suggested to find more on statistical learning with Spark MLlib at [3].

In my next article, I will show how to perform hypothesis testing using the Kolmogorov-Smirnov  Test. The maven friendly pom.xml file, associated source codes and breast cancer prognosis dataset can be downloaded from my GitHub repository here.