let’s say your organization is splitting a big, monolithic application into multiple, smaller, and more specialized microservices. for instance, some of them will interact with a relational database and a message broker, while others will communicate with a nosql database.

this is a great opportunity to standardize the new deliverables in your company. you might want to develop some custom spring boot starters responsible for providing common java application components , logging, tracing, metrics, monitoring, resilience, rdbms, and apis implementation support, helping with the application bootstrapping process and reducing common boilerplate code in each spring boot-based service.

once you are using these spring boot starters in an application, how would you use them in a new service? could you copy, paste, and change the artifact id? or, could you remove unused dependencies and clean up properties files and java classes? although this process works, it involves manual labor that is tedious and error-prone. 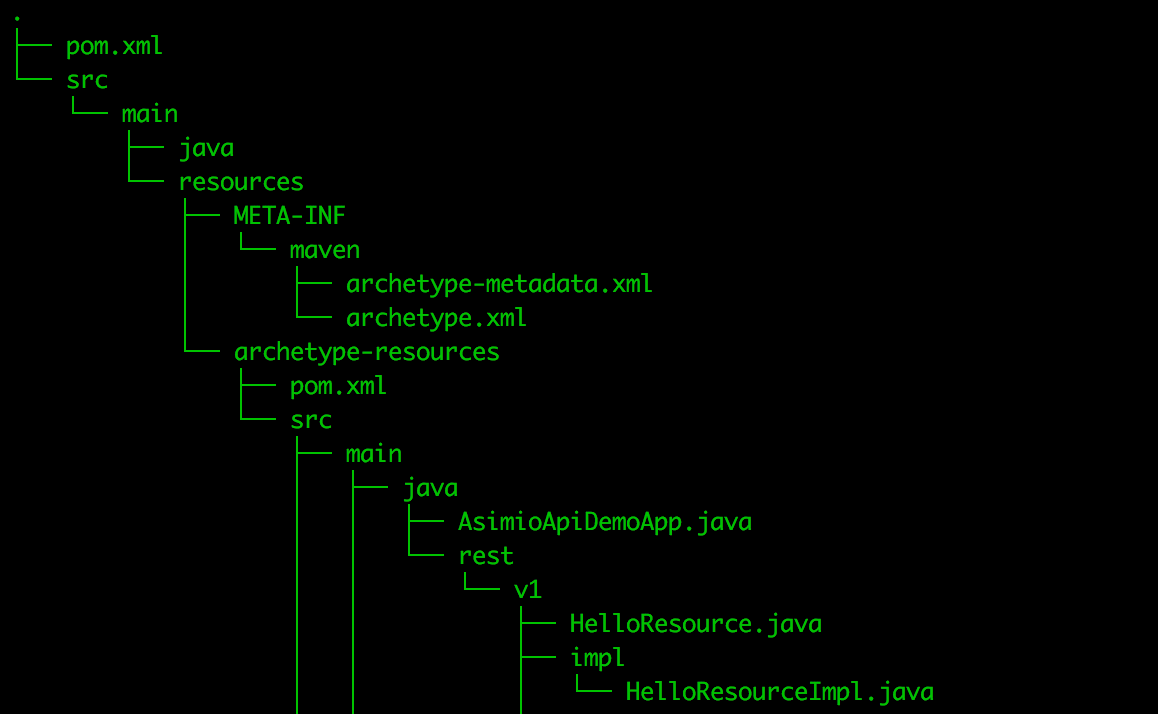 in this guide, i will describe how to implement and use a custom maven archetype, which uses a custom spring boot starter, integrated into a multi-module maven setup to automate new projects generation.

this is done so that the maven archetype gets built as part of any change to any module of the custom spring boot starter .

i would suggest implementing a proof of concept or demo application like asimio-api-starter-demo , discussed while creating an application using a custom spring boot starter , and use some of its java classes and other files as the prototype for this archetype. the resulting folder structure should be similar to: 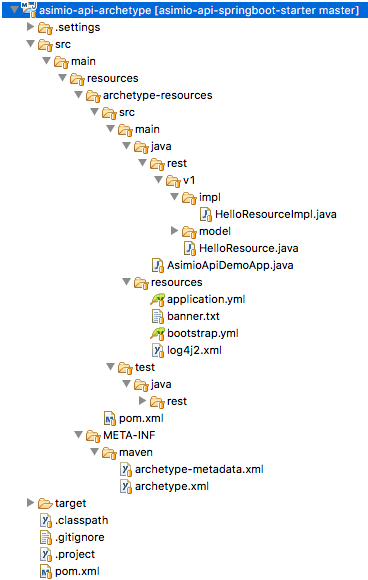 this archetype gets built as part of a maven multi-module setup, where the modules version, dependencies, etc. are handled in the parent pom.

next comes the archetype descriptor file:

according to the documentation , the id should match the artifactid, as found in pom.xml .

in the archetype metadata file, you describe the properties and file sets that this maven archetype uses and processes:

in this specific case, default values will be used, if they are not specified in the command to generating a project:

warning: applications including release dependencies will bundle the latest version found in the maven repository — use them with caution .

a filtered fileset means that the included files will be processed as velocity templates, expressions will be evaluated, variables will be replaced, etc.. if filtered is false, files will be copied as is.

src/main/resources/archetype-resources is where you put the prototype files used as the source to generate a new application. they include pom.xml, java classes, properties files, test classes, etc.

let’s take a look at:

notice a ${groupid} velocity variable? that’s the why filtered was set to true for the fileset, including src/main/java in the archetype metadata file . once this folder is processed during application generation, assuming the groupid property was com.acme , the generated java class should look like:

lets build and install this maven archetype locally so that it could be found in ( ~/.m2/repository ) when generating a new spring boot-based service:

a better choice would be to deploy the archetype artifact to a maven repository manager like nexusor artifactory or to an aws s3 bucket for the archetype to be reused outside of your development station.

i can’t stress the importance of generating an application using this archeype as part of your ci / cd pipeline enough.  i strongly believe a change to the archetype or any maven module included as a dependency, triggering a new build, should also trigger generating an application using said archetype. this will be done by and building it using the mvn clean package to be sure generated services won’t fail.  if you don’t do so, it’s very likely that, at some point, the archetype is going to generate applications that either can't compile or tests that will fail.

generating a service from a maven archetype

some vm arguments are explained below:

now, you have a new spring boot-based application, generated from a custom maven archetype , integrating spring boot, apache cxf and swagger via a custom spring boot starter with a handful of passing unit and integration tests. but, it could have included a common set of components, such as servlets, filters, listeners , support for fault tolerance, logging, tracing, exception handling, etc.

use "release" with caution

if you look at the newly created application asimio-api-demo ’s pom.xml :

it includes one release dependency to keep this guide and series short, but it’s expected to include many in-house release artifacts. a change to any of these dependencies will impact the applications that use them.

if the asimio-cxf-swagger-springboot-starter artifact is updated, the next time asimio-api-demo gets built, even without any modification, it will bundle a new version. there is a risk in doing so, — it’s a trade-off.

with a release version, applications get new functionality and bug fixes without any change to its pom file. but, a change to the signature of a public method in the dependency will also break the applications.

on the other hand, if an application uses a specific version, such as 1.0.4 , there is no risk in it failing. this is because the library keeps getting updated, but the application won’t get new functionality from this library either. there might be a reluctance to uplift a dependency to 5.0.16 two years after 1.0.4 was released.

accompanying source code for this blog post can be found at: