Dataweave can process several different types of data formats like flat files, copybooks, fixed-width files, etc. For most of these types, you can import a schema that describes the input structure in order to have access to valuable metadata at design time.

These schemas currently only work with certain single-byte character encodings. All foreign languages — Spanish, Japanese, French, etc. are of multibyte size unlike English, where 1 character = 1 byte.

Mulesoft doesn’t have the capability to handle multibyte characters. While processing, the mule runtime considers each character present in the fixed-width flat file of 1 (one) byte.

Thus, if there is any multibyte character present in the flat file it couldn’t be parsed correctly.

Conversion of flat files with multibyte characters, to single byte, thus ensuring correct parsing while it is processed in Mulesoft.

Optional conversion back to the original structure while exporting the file to external systems.

For the purpose of demonstration, I am using the Flat File Definition (.ffd) as given below:

As per the schema definition, the FirstName length should be size 10 (ten). When a fixed width flat file is created by ERP systems, each line is written by bytes and not characters. For example, the Japanese characters are of 3 (three) bytes in UTF-8 format. They will occupy only one space in a file but in actual as per the ERP system, it is 3 spaces.

The process flow below is used for processing fixed-width flat file: 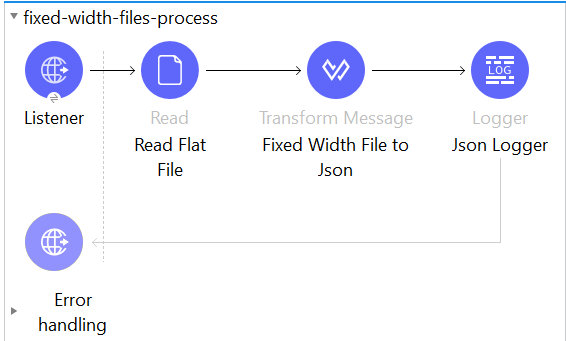 The fixed-width flat file to be processed is as below:

Here the first line contains single-byte characters so Mulesoft will be able to handle them without any problems, but in the second line for FirstName certain Japanese characters are passed. These characters occupy only 3 spaces but in actual these are 9 bytes. As per the FFD schema, the FirstName should be of size 10 (ten). While processing, Mulesoft will throw an exception.

Since Mulesoft considers all characters as single bytes, it throws an exception that the expected size is not met for a particular field. In this case, it's the FirstName.

The number of spaces added is dynamic, based on the size of the multibyte character.

The above Java utility has two functions: convertflatfile and removingSpace.

Below is the modified process flow:

While reading the file, the below property should be selected:

The Set Payload component will contain the FFD schema details.

In the post-processing, the spaces are removed:

The above solution will enable Mulesoft to process and parse flat files with multibyte characters. This is an interim solution until Mulesoft provides an out-of-the-box functionality for the problem.