I was part of cloud migration projects for one of our clients (a UK utility company) where we installed OpenShift clusters across different environments on top of AWS cloud to deploy the code and to run the DevOps pipelines.

We had five different OpenShift clusters viz, Development, Test, Pre-production, Production, and Automation. Each cluster would have different numbers of nodes, of which the master and infra nodes were constant across all environments (three nodes each) and a different number of worker nodes based on the workload on each cluster. So, the AWS cost was significantly high considering the number of nodes (AWS ec2-instances) we were working with across different clusters.

But, there was a challenge!

When we used OpenShift drain commands to drain the nodes, some pods were not fully deleted because of the session timeouts or because some pods were taking too long to delete. Though we were excluding OpenShift system-related Daemonset pods while draining, deleting all application pods within the grace period without the session timing out was a challenge. We had to implement a looping logic in the shell script to overcome this issue.

The implementation involved a series of shell scripts which were called, one after the other, in the below order.

This implementation helped our client to save enormously on their AWS infrastructure cost. We will take a look at the implementation in the subsequent sections below.

In the above sequence, the application pod scale down (application scale down) is optional as it is purely project specific. 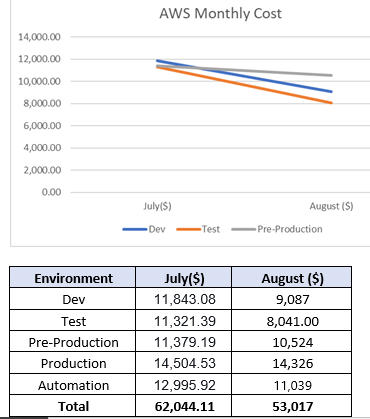 Our implementation is for RedHat OpenShift v3.11 and the same implementation works for the original version of OpenShift (OKD) also. If anyone would like to implement this in a client's project, it is always recommended to seek the vendor's suggestion on how to/whether it is allowed to restart the nodes. Some vendors will not support the restart of underlying nodes once they are setup. Also, it is not recommended to shutdown master nodes as they host many system-related pods and API components.

Below is the snippet of logic we used in the entire implementation.

(Repeat the step for all nodes in the cluster)

Step 2: Drain all Nodes on the Cluster

The below logic will make sure that the session doesn’t timeout and all pods are deleted from the node.

Once the pods on the nodes are completely drained, it is time to shut down the ec2-instances.

Step 1:Depending on the cloud provider, you'll need to include the scripts in the beginning to start the environment.

Step 2: Schedule the nodes which were unscheduled before.

Step 3: Once the nodes are ready and the scheduling is enabled, the pods will automatically schedule on these nodes.

If the implementation has an application scale UP script, that needs to be scaled up additionally once the cluster nodes are up-and-running.