The Significance of API Testing in Software Development

Application Programming Interface or API is no longer an unpopular term in software development. In a three-tier architecture, APIs lay in the domain or business logic tier and ensure the continuity of data transformation between the two other components.

The significance of APIs is reflected in how they help developers save a vast amount of resources when developing applications. With over thousands of public APIs available, developers can access and incorporate almost every shared function into their software without having to start from scratch.

Additionally, the merge of Agile methodology has stated the vital role of APIs in software development. APIs allow testers and developers to validate the standard functionalities of a product at earlier stages. Hence, Agile teams can meet the requirements for a higher frequency of product releases.

APIs turn to be the ideal solution for “quality at speed”, and API testing is indispensable to the software development life cycle. Therefore, it is essential for API tests to fulfill all the requirements for functionality, reliability, performance, and security to ensure data connectivity. Regarding the high demand for API tests, testers should utilize the best API testing tools to achieve testing goals. Read more about API testing tips for beginners here.

First known as an API validation browser extension, Postman has emerged to be the tool of choice for API development, testing, and managing APIs for QA professionals. Postman was once a side project by Abhinav Asthana that simplified API workflow in software testing and development. By now, the tool has had over 4 million users worldwide.

Postman can run on multiple operating systems from Windows, Mac OS to Linux. It offers developers more room to develop APIs. For functional testers, Postman allows testers to create tests for API calls without much effort spent on coding scripts. Some of Postman’s outstanding benefits include:

These robust features simplify the entire process of building and sharing APIs for developers. When it comes to API testing, especially automation testing, Postman has considerable limitations nonetheless:

Regarding these throwbacks, Postman is highly recommended for manual API testing, specifically for REST APIs. When dealing with advanced and in-depth API tests, an automation tool built for API testing can benefit QA teams in several aspects compared to Postman. One of them is the advantage of well-structured test collections and frameworks. It saves users’ time and effort when it comes to locating and organizing test cases. In Agile teams where every member has to maintain close communication with each other, the nature of Postman turns to be an obstacle for cross-functional collaboration.

We compiled here two potential Postman alternatives in API Testing. The top picks are not exhaustive but balance almost all requirements for a comprehensive API automation testing solution.

Katalon Studio is the complete solution for test automation, including APT automation testing. With its integrated environments, users can generate and validate API calls on web, desktop, and mobile applications. Built on top of Selenium and Appium, it provides users with several needed components, built-in keywords, and test execution templates.

With Katalon Studio, testers and developers have a unique environment to execute API and Web automation tests. As a solution built specifically for automated test validation, Katalon has comprehensive reporting and tracking tools, giving users the ability to organize and manage tests efficiently.

Price: Free and paid license starting from $69 per month

SoapUI is an API automation testing tool and a part of the ReadyAPI suite from SmartBear. Initially built for SOAP API testing, it has extended to support REST services. SoapUI is available for multiple platforms, from Windows, Mac OS to Linux.

There are two versions of SoapUI available for users to experience: SoapUI open source and SoapUI Pro — its paid version. The pro edition has a friendly drag and drop interface that simplifies test execution. Assertion wizard, form editor, and SQL query are other advanced features packed in SoapUI Pro. 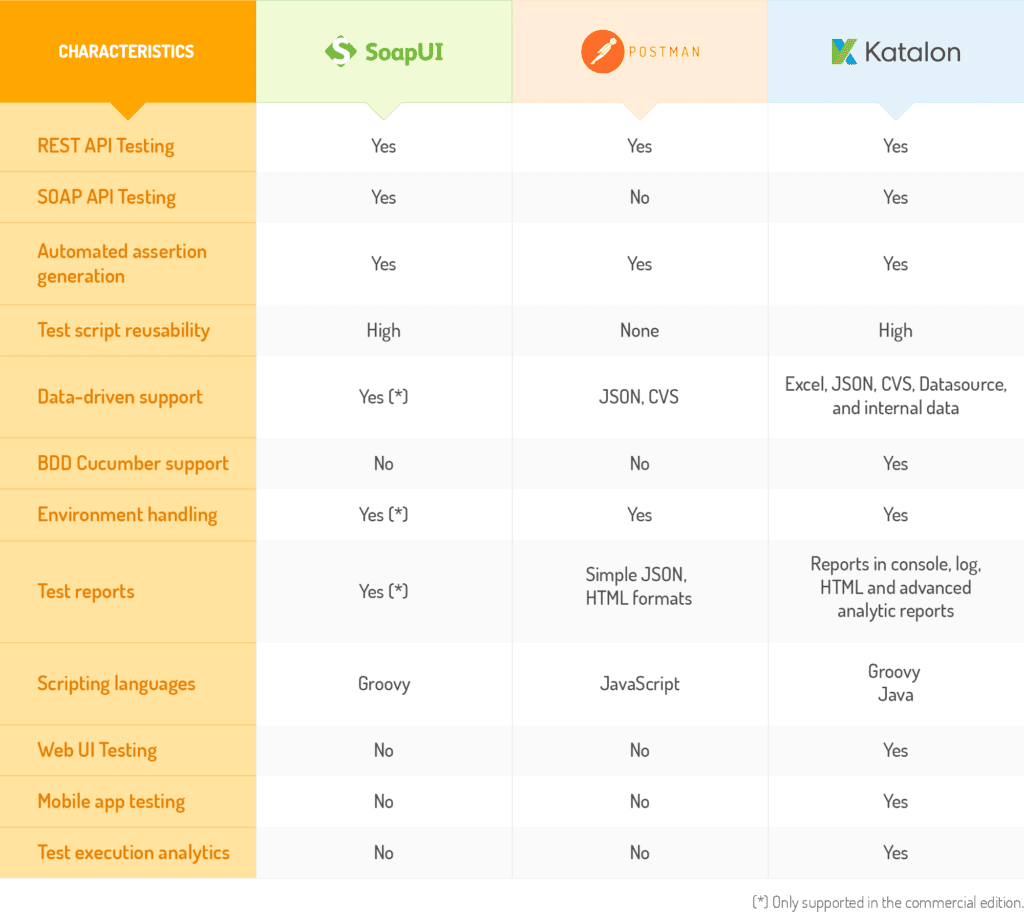 Postman in comparison with Katalon Studio and SoapUI

With a functional testing orientation, Postman remains one of the top choices for API validation. The tool is efficient enough to meet the requirements of a decent manual tool for API tests.

For QA teams with higher demands in API testing, specialized automation tools would be the right solution. Key factors to be considered when choosing an API automation tool include:

You can find out more of Postman alternatives to best fit your testing demands here.