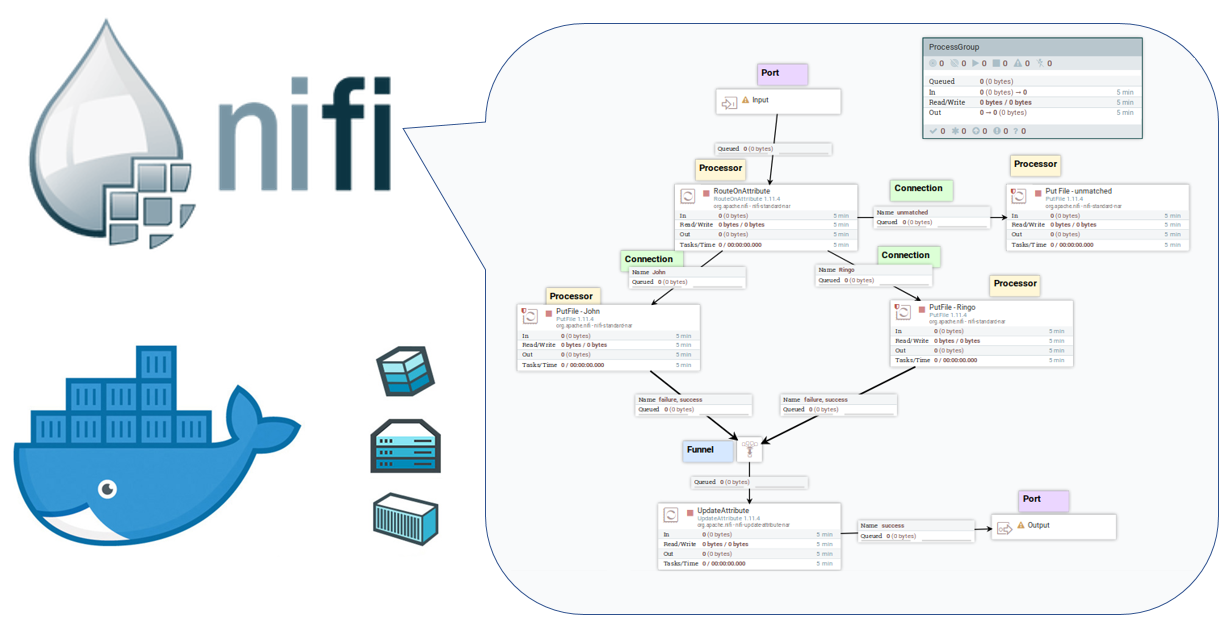 The system I work on is about to undergo a significant tech-refresh. The goal is to improve the current hindrances that prevent ingesting more data. The remedy requires a product that receives inputs from external sources, processes them, and disseminates the outcomes to their destinations.

Apache Nifi implements the flow-based programming (FBP) paradigm; it composes of black-box processes that exchange data across predefined connections (an excerpt from Wikipedia).

In short, Apache NiFi is a tool to process and distribute data. Its intuitive UI supports routing definitions, a variety of connectors (in/out), and many built-in processors. All these features combined together make it a suitable optional platform for our use case.

In view of our system’s future needs, we decided to evaluate Nifi thoroughly. The starting point is setting up an environment.

In this article, I’ll describe how to set up a Nifi environment using Docker images and run a simple predefined template; building a Nifi flow from scratch will be covered in another article. The main three parts of the article are:

Ready? Let’s start with the foundations.

Nifi is based on the following hierarchy:

The Nifi flow below depicts these components: 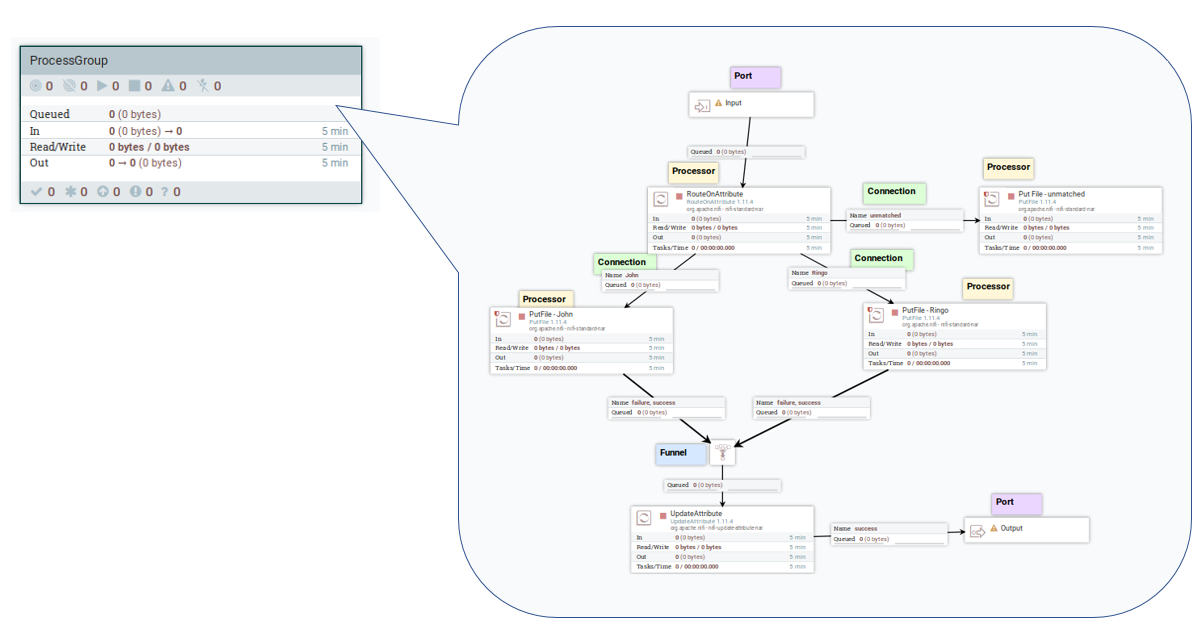 After reviewing Nifi data flow components, let’s see how to set up an environment.

Instead of installing Nifi on my machine, I chose to work with Nifi hosted on Docker containers, mainly for the following reasons:

I used Ubuntu, a Debian-based Linux, so you can find the commands to install and configure Docker in this article.

Once Docker is installed, download the latest Nifi image version from DockerHub.

You can create and start a Docker container with the default settings:

However, I want to create a bit more sophisticated container that allows the following:

Hurray! your Nifi application is running and accessible via port 8091.

Next is setting a version control tool — Nifi Registry.

Although you can backup the flowfile.xml.gz file that contains all the Process Groups’ information, the proper way to manage versions is using Nifi Registry; its main advantage is the simplicity in saving changes encapsulated in a dedicated flow.json file per Process Group.

Nifi Registry image is available in Docker Hub; run the commanddocker pull to install it.

The Docker command below defines and starts a Nifi Registry container. I chose not using the -d (detach) option, as suggested in DockerHub, so the progress and output of the container will be visible while it is running. Unlike the Nifi container, this time I chose to keep the default port since I won’t be using multiple Nifi Registry instances.

Generally, we can connect a Nifi application to one or more registries. That allows flexibility when working with more than one environment.

To connect our Nifi application (http://localhost:8091/nifi) to a registry, let’s access the Nifi Setting → Registry Client → [+].

The host’s IP is the Gateway:

Since the output of this command is extensive, the command below will fetch only the IP of the gateway:

After that, the definition of the Nifi Registry is straightforward. The image below exemplifies a Nifi application connected to two Nifi Registry instances.

Let’s create a bucket and call it Flow-Development. In the image below, I created two buckets, one for development and the other for staging:

Although our Nifi canvas is empty and there is no Process Group to save, the foundations are there. After we create a Process Group it can be saved into the registry.

Now, we’re ready to move on.

Once the Nifi container is running, we can run the command docker exec to enter into the container and explore it; the following command runs bash in the container (using the parameters -i for interactivity and -t for terminal):

Navigating in the container’s directories, you can reach to thenifi/conf directory, which holds the flow.xml.gz file. This file holds all the Nifi UI canvas information that includes all Process Groups; any change is saved automatically.

After entering into the Nifi container, these repositories reveal:

So, after setting and running the Nifi application and connecting it to Nifi Registry, you’re ready to go and run a data flow.

Instead of building a Nifi flow from scratch, let’s load an existing one. There are two options to load Flow into Nifi:

The first is straight forward, whereas the latter is a bit more complicated but can be done easily using Nifi toolkit, which is not covered in this article.

You can download the sample template from GitHub, and then upload it into your Nifi application: 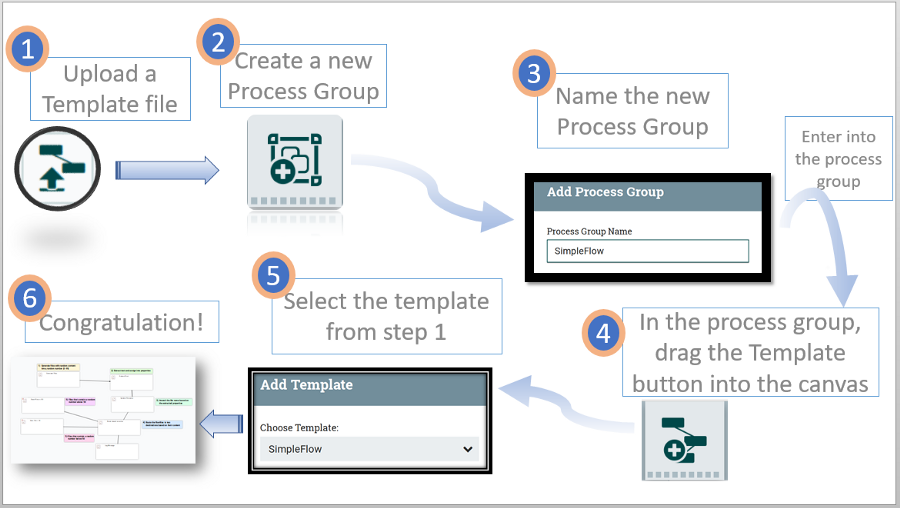 This template includes five steps, starting from generating a file with random text, rename it, extract properties, and route the results into directories based on the extracted properties (the details are depicted in the GitHub repository).

Once the processing ends, the files are saved under a local directory in the container itself. Going back to the container’s run command shows it included a shared volume definition(ls-target). This volume is the destination of the processed files, and thus it can be accessed from the host:

Troubleshooting: you may have a problem dropping the files into the directory if permissions were not granted: (the error message is “permission denied”):

To rectify this problem, grant permissions to the directory (chmod command).

This directory can be accessed from within the container too:

Open the Process Group’s variables and see the target folder is defined there:

Diving Into the Nifi Processors

You can start all the processors at once with right-click on the canvas (not on a specific processor) and select the Start button. After a while, the files should reach the destination folders.

Each generated file undergoes a process of changing its name and being routed based on its content; I preferred to keep it simple and avoid changing the files’ content. Nevertheless, this template exemplifies some features of Nifi processors:

The template uses the following processors:

Once the process runs, you can stop the Update Filename processor and see what happens. In a short while, the connector that passes FlowFiles to Update Filename will reach a limit and repress files from flowing into the previous processor in the flow.

This behaviour is a showcase of the Back Pressure definition; the connector is limited by the number of FlowFiles or their overall size. In case this mechanism is activated, it points out a problem. This is a trigger to start investigating what went wrong. It may be a problem, such as malfunction processor, or an indication the fundamental load has increased and thus the flow should be tuned or distributed.

After running the template and changing it a bit, you want to save it. Remember Nifi Registry?

Choose “Start version control” and save the Process Group to the bucket you created before:

Nifi indicates whether a Process Group’s latest state is captured in the version control or not: a green check means it has been saved in the registry. If there are changes that were not committed to the registry, it is signalled with a dark asterisk.

Some Best Practices Before Closure

If you’ve made it until here, you obtained a working platform to implement your application; this template uses only a few basic processors but it can be a springboard for continuing to build a more complex flow that uses the impressive variety of Nifi processors.

This article scratches only the tip of the iceberg; there are many aspects and functionality to cover, like data provenance, logging, variables and parameters, Nifi services, converging processors’ output using funnels, and more. The supporting tools for automation is a huge area to cover too.