When I was attending night school to become a programmer, I learned several design patterns: singleton, repository, factory, builder, decorator, etc. Design patterns give us a proven solution to existing and recurring problems. What I didn’t learn was that a similar mechanism exists on a higher level: software architecture patterns. These are patterns for the overall layout of your application or applications. They all have advantages and disadvantages. And they all address specific issues.

The layered pattern is probably one of the most well-known software architecture patterns. Many developers use it, without really knowing its name. The idea is to split up your code into “layers”, where each layer has a certain responsibility and provides a service to a higher layer.

There isn’t a predefined number of layers, but these are the ones you see most often:

The idea is that the user initiates a piece of code in the presentation layer by performing some action (e.g. clicking a button). The presentation layer then calls the underlying layer, i.e. the application layer. Then we go into the business layer and finally, the persistence layer stores everything in the database. So higher layers are dependent upon and make calls to the lower layers. 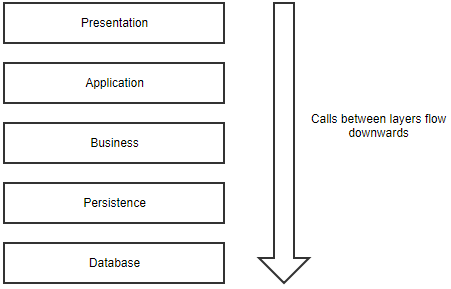 You will see variations of this, depending on the complexity of the applications. Some applications might omit the application layer, while others add a caching layer. It’s even possible to merge two layers into one. For example, the ActiveRecord pattern combines the business and persistence layers.

As mentioned, each layer has its own responsibility. The presentation layer contains the graphical design of the application, as well as any code to handle user interaction. You shouldn’t add logic that is not specific to the user interface in this layer.

The business layer is where you put the models and logic that is specific to the business problem you are trying to solve.

The microkernel pattern, or plug-in pattern, is useful when your application has a core set of responsibilities and a collection of interchangeable parts on the side. The microkernel will provide the entry point and the general flow of the application, without really knowing what the different plug-ins are doing.

An example is a task scheduler. The microkernel could contain all the logic for scheduling and triggering tasks, while the plug-ins contain specific tasks. As long as the plug-ins adhere to a predefined API, the microkernel can trigger them without needing to know the implementation details.

Another example is a workflow. The implementation of a workflow contains concepts like the order of the different steps, evaluating the results of steps, deciding what the next step is, etc. The specific implementation of the steps is less important to the core code of the workflow.

CQRS is an acronym for Command and Query Responsibility Segregation. The central concept of this pattern is that an application has read operations and write operations that must be totally separated. This also means that the model used for write operations (commands) will differ from the read models (queries). Furthermore, the data will be stored in different locations. In a relational database, this means there will be tables for the command model and tables for the read model. Some implementations even store the different models in totally different databases, e.g. SQL Server for the command model and MongoDB for the read model.

This pattern is often combined with event sourcing, which we’ll cover below.

How does it work exactly? When a user performs an action, the application sends a command to the command service. The command service retrieves any data it needs from the command database, makes the necessary manipulations and stores that back in the database. It then notifies the read service so that the read model can be updated. This flow can be seen below. 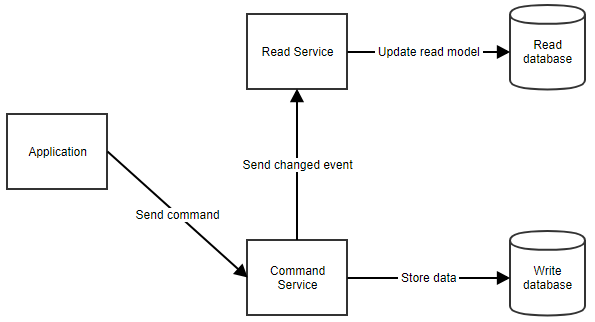 When the application needs to show data to the user, it can retrieve the read model by calling the read service, as shown below. 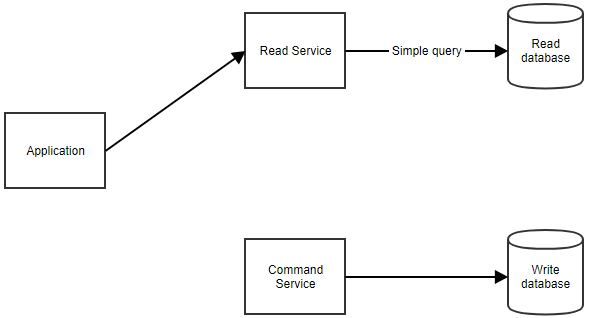 As I mentioned above, CQRS often goes hand in hand with event sourcing. This is a pattern where you don’t store the current state of your model in the database, but rather the events that happened to the model. So when the name of a customer changes, you won’t store the value in a “Name” column. You will store a “NameChanged” event with the new value (and possibly the old one too).

When you need to retrieve a model, you retrieve all its stored events and reapply them on a new object. We call this rehydrating an object.

A real-life analogy of event sourcing is accounting. When you add an expense, you don’t change the value of the total. In accounting, a new line is added with the operation to be performed. If an error was made, you simply add a new line. To make your life easier, you could calculate the total every time you add a line. This total can be regarded as the read model. The example below should make it more clear.

You can see that we made an error when adding Invoice 201805. Instead of changing the line, we added two new lines: first, one to cancel the wrong line, then a new and correct line. This is how event sourcing works. You never remove events, because they have undeniably happened in the past. To correct situations, we add new events.

Also, note how we have a cell with the total value. This is simply a sum of all values in the cells above. In Excel, it automatically updates so you could say it synchronizes with the other cells. It is the read model, providing an easy view for the user.

Event sourcing is often combined with CQRS because rehydrating an object can have a performance impact, especially when there are a lot of events for the instance. A fast read model can significantly improve the response time of the application.

Ideal for applications that

When you write your application as a set of microservices, you’re actually writing multiple applications that will work together. Each microservice has its own distinct responsibility and teams can develop them independently of other microservices. The only dependency between them is the communication. As microservices communicate with each other, you will have to make sure messages sent between them remain backwards-compatible. This requires some coordination, especially when different teams are responsible for different microservices.

A diagram can explain. 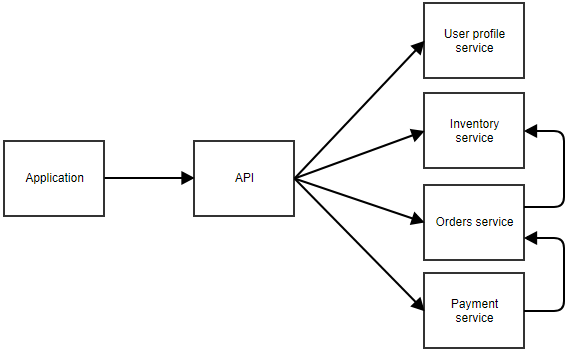 In the above diagram, the application calls a central API that forwards the call to the correct microservice. In this example, there are separate services for the user profile, inventory, orders, and payment. You can imagine this is an application where the user can order something. The separate microservices can call each other too. For example, the payment service may notify the orders service when a payment succeeds. The orders service could then call the inventory service to adjust the stock.

There is no clear rule of how big a microservice can be. In the previous example, the user profile service may be responsible for data like the username and password of a user, but also the home address, avatar image, favorites, etc. It could also be an option to split all those responsibilities into even smaller microservices.

I’ve explained several software architecture patterns, as well as their advantages and disadvantages. But there are more patterns than the ones I’ve laid out here. It is also not uncommon to combine several of these patterns. They aren’t always mutually exclusive. For example, you could have several microservices and have some of them use the layered pattern, while others use CQRS and event sourcing.

The important thing to remember is that there isn’t one solution that works everywhere. When we ask the question of which pattern to use for an application, the age-old answer still applies: “it depends.” You should weigh in on the pros and cons of a solution and make a well-informed decision.