Don't get fooled by too many articles out there that make JWT sound more complex and complicated than it actually is. In simple words, JWT is a simple format that aims to transfer claims between two parties in a  compact and secure manner. A claim is a key-value pair that asserts something about a subject.

The diagram below will give you a very simple idea of how a JWT is layered. It is a set of claims as a JSON object, that is secured by a JWS (JSON Web Signature) or a JWE (JSON Web Encryption) layer. 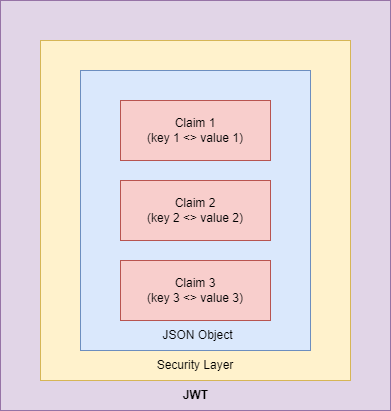 The diagram below will give you a very simple idea of how a JWT is structured. It is a sequence of URL-safe base64 encoded values separated by '.' characters. 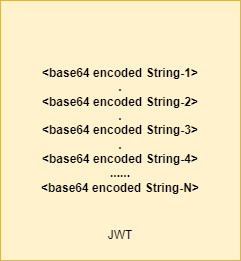 Example of a JWT

Let's go over a simple example to understand how all of this adds up. This JWT in the example is secured using a JWS signature (Signatures help with integrity checks. For example, it can confirm that the sender of a message is the one who they say they are. Read this for more details).

The JSON object below is the header of the JWT. All it says is that the JWT is integrity protected using a JWS and is MACed as well using an HMAC SHA-256 algorithm ( Don't worry too much about it for now).

To make it eligible to be a part of the resultant JWT token we need to convert it to a base64 encoded string.

The JSON object below is the payload of the JWT. It contains the info that you actually intend to transmit from the sender to the recipient. They are also called claims, as discussed above.

These claims need to be base64 encoded as well.

Now we need to generate the JSON Web Signature for the JWT which is generated with the simple formula:

This formula gives us the resultant value as below:

This is just the '.' separated sequence of the header, payload, and signature!

A few things to remember about JWT claims:

There are 3 kinds of claims used in JWT and they must be used as appropriate, depending on the use case.

There are a bunch of registered claim names that are defined in the "JSON Web Token Claims" registry.  There is no rule that enforces the usage of these claim names. Instead, these are helpful standards that can be used as necessary by the developers.

These can be defined as appropriate by the developers. Collision prevention should be kept in mind while defining these. So, they should ideally be defined in the registry.

These care claim names that are agreed upon by the sender and the recipient of the JWT. These are prone to collisions and hence, uniqueness should be kept in mind while defining these.

The JWT header generally defines the cryptographic operations applied on the JWT. If you look at the example from above, we used 2 parameters:

If you are wondering whether claims names can also be used as JWT header parameters, the answer is a yes. At the end of the day, this is something you can control while designing your JWT.

Yes, they exist! JWTs may be created without any signature or encryption. For such JWTs set the alg header parameter value as "none". Its signature value is also an empty string, something like this :

JWTs are used everywhere these days for various purposes. A few of those are explained below