In this guide, we will walk through the process of the automated deployment of a Spring Boot application using GitLab CI.

Docker and Spring Boot is a very popular combination, and we will take advantage of GitLab CI and automatically build, push and run a Docker image on application server.

The Gitlab CI/CD service is the part of GitLab that builds, tests, and places the latest changes in the desired environment whenever the developer pushes code to the GitLab repository.

Some of the main reasons why GitLab CI is a good choice:

Why GitLab CI Over Jenkins

This is for sure a wide and debatable topic, but in this article, we won't dive deeply into that. Both GitLab CI and Jenkins have pros and cons and they are for sure very powerful tools.

Let's try to point out use cases where GitLab might be wiser choice.

As it is previously mentioned, CI is fully part of GitLab repository, which means it's not needed to install it and maintenance is minimum. Once the .yml script is finished, you are more or less done with everything.

Jenkins can be overhead for small projects as you have to set up and configure everything by yourself. You also usually need a dedicated Jenkins server, and that is also extra maintenance, cost, and another thing to worry about.

In order to successfully follow this guide, there are few prerequisites. If any help is needed related to these prerequisites I've included a link to the appropriate guide, so feel free to visit it if necessary.

You will basically create a Dockerfile and .gitlab-ci.yml, which will be used to automatically:

Spring Boot application for this guide is generated via Spring Initializr. Basically it is a Maven project built on Java 8 or 11. We will cover later how Java 8 and 11 affects the Docker image.

Let's start with the Dockerfile.

There are few things nice to know related to this Dockerfile.

Let's see what from Docker's point of view is different between Java 8 and 11. Long story short: it's the Docker image size and deployment time.

Docker images built on Java 8 will be noticeably smaller than ones on Java 11. That also means build and deploy times will be faster for Java 8 projects.

Note: These stats are related to plain Spring Boot projects that are used for the purpose of this guide; on a real application these numbers will be probably a bit different.

As it is already seen in previous example, we have huge difference for app image size and build time just because of the Java version. The actual reason behind that is Docker images used in Dockerfile.

If we take another look at the Dockerfile, the real reason behind the large Java 11 image size is because there is no verified/tested Alpine version of open-jdk:11 image. Instead, we had to use a open-jdk:11-slim image which produces larger images.

If you are not familiar with the OpenJDK image versions, I suggest taking look at the official OpenJDK Docker documentation. There you can find an explanation for each OpenJDK version of image.

ARG SPRING_ACTIVE_PROFILE is used so it's possible to build and package an application with correct environment-related properties.

Unfortunately, at the time when this guide is written, there is no clean way to use that variable in  ENTRYPOINT , and in order to run an application on different environments, it's mandatory. Basically the  ENTRYPOINT  would look like this:

And to make it dynamic, what you naturally would expect is to simply convert it to:

As already-mentioned, unfortunately, this is not possible, but fortunately this problem can be easily solved when running an image with the Docker. This will covered in .gitlab-ci.yml.

Before writing this file there are few things to prepare first. Basically what we want to achieve is that whenever code is pushed, an automatic deployment is started on the corresponding environment.

We need first to create branches and .env files that contain environment-related variables. Each branch will actually represent the environment where our application is running.

We will deploy our application on three different environments: development, QA, and production. That means we need to create three "main" branches. We already have the master branch which represents the production environment, so simply create 2 more branches: development and QA.

Our dev, QA, and prod applications will run on different servers and they will have different Docker container tags, ports and SSH Keys. That means our gitlab-ci.yml file will need to be dynamic, lets solve that problem by creating .env file for each environment that we have.

IMPORTANT: There is one simple rule when naming these files: they need to be named by the branch on GitLab, so a file name should be like this: .$BRANCH_NAME.env

For example this is .develop.env file.

SPRING_ACTIVE_PROFILE: self-explanatory, which Spring application properties we want to use.
DOCKER_REPO: This is a repository for the Docker image. Since we are using one repository we will use tags to distinguish between images used on different environments, so that means we will have 3 different tags: dev, qa and production.

As you can see there is a repository with three different tags, and each tag (application version) is being updated whenever the code is pushed on a GitLab branch.

The last step that needs to be done is creating GitLab variables. Here it's recommended to keep variables that you do not want everyone to see. We will keep here some credentials and ssh keys.

Open your GitLab repository and go to: Settings -> CI/CD. In the Variables section add new variables:

At the end, your GitLab variables should look like this. 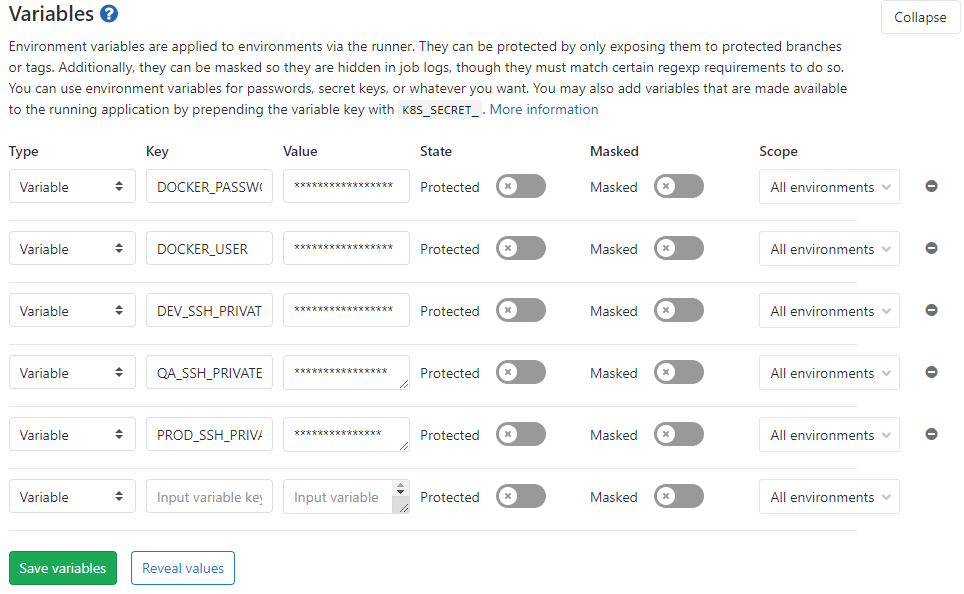 And finally, let's create the file that will put together all this.

Let's explain what is happening here:

This is actually a service that allows us to use Docker in Docker. Running Docker in Docker is generally not a good idea, but for this use case it's totally fine, since we will just build the image and push it to the repository. You can get more information about Docker in Docker here.

For each gitlab-ci.yml file, it's mandatory first to define stages. Stages will be executed in the order defined under stages part of the script.

In every stage we will have to add this part:
before_script:
- source .${CI_COMMIT_REF_NAME}.env

This simply loads previously created env. files, and it will enable the usage of variables that are defined inside. Depending on which branch build is running variables are automatically injected. (That is the reason why we had to name .env files by exact branch name)

These are the actual stages in our deployment process.

As you can see under the stages, there are three circles with a green check marks, which means all the stages are executed successfully.

This is part of the code that executes the first stage, building a jar file that can be downloaded and used later for whatever you need it. This is actually an optional stage, and it's used just to demonstrate how easy it is to build jar and download it from GitLab.

The second stage is building and pushing the Docker image on the Docker repository.

Because of this step, we had to use docker:19.03.7-dind service. As you can see we are using the latest stable version of Docker, and we are simply building our image for an adequate environment, then we are authenticated to our Dockerhub and pushing image.

The final part of our script is:

In this step, we are using the Ubuntu Docker image so we can ssh to our application server and run a few (Docker) commands. Part of the code in  before_script is mostly taken from the official documentation, but, of course, we had to adjust to it a bit for our needs. In order to avoid making private key verified, this line of the code is added:

But if you do not like it, you can follow this guide and verify your private key.
As you can see in the last stage of the script, we are executing a few Docker commands.

I hope this guide will help you to better understand and implement GitLab CI in your projects. If you have any questions or suggestions feel free to contact me or leave a comment.