In this series of chaos engineering articles, let's discuss how to simulate CPU consumption to spike up to 100% on a host (or container). CPU consumption will spike up whenever a thread goes on an infinite loop. Here is a sample program from the open-source BuggyApp application, which would cause the CPU to spike up.

In the above Java program, you will notice the 'CPUSpikeDemo' class. In this class, 6 threads with the name 'CPUSpikerThread' are launched. If you notice the 'CPUSpikerThread' class code, there is a 'while (true)' loop without any code in it. This condition will cause the thread to go on an infinite loop. Since 6 threads are executing this code, all the 6 threads will go on an infinite loop. When this program is executed, CPU consumption will skyrocket on the machine.

We launched the above BuggyApp program on a 't3a.medium' EC2 instance, which has 2 CPUs. Below is the output from the UNIX performance monitoring tool 'top'. You can notice the overall CPU % reaching up to 100%. 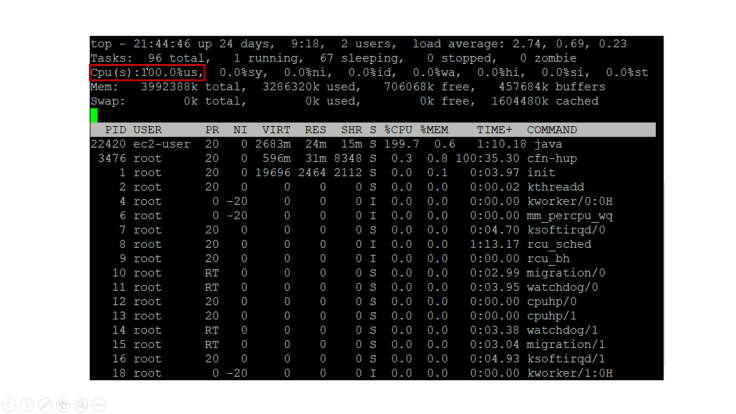 How to Diagnose CPU Spikes?

As highlighted in this article, you can use a manual approach to do root cause analysis:

On the other hand, you can use automated root cause analysis tool like yCrash — which automatically captures application-level data (thread dump, heap dump, Garbage Collection log), system-level data (netstat, vmstat, iostat, top, top -H, dmesg, …) and marries these two datasets to generate instant root cause analysis report instantly. Below is the report generated by the yCrash tool when the above sample program is executed: 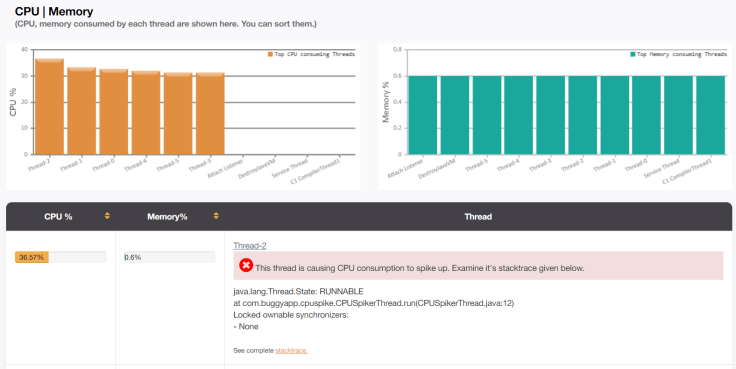 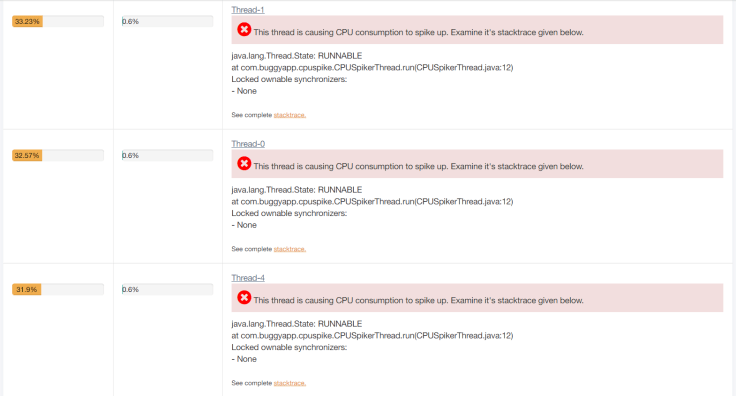 From the report, you can observe the yCrash is pointing out that 6 threads are causing the CPU to spike up. In the 'CPU | Memory' section of this report, you will notice that the CPU consumption of each thread (which is > 30%) is being reported. You can also notice that tool is pointing out exact lines of code, i.e., com.buggyapp.cpuspike.CPUSpikerThread.run(CPUSpikerThread.java:12) that are causing the infinite loop. Equipped with this information, one can easily go ahead and fix the problematic code.