Joins are one of the most fundamental transformations in a typical data processing routine. A Join operator makes it possible to correlate, enrich and filter across two input datasets. The two input datasets are generally classified as a left dataset and a right dataset based on their placing with respect to the Join clause/operator.

Fundamentally, a Join works on a conditional statement that includes a boolean expression based on the comparison between a left key derived from a record from the left dataset and a right key derived from a record from the right dataset. The left and the right keys are generally called ‘Join Keys’. The boolean expression is evaluated against each pair of records across the two input datasets. Based on the boolean output from the evaluation of the expression, the conditional statement includes a selection clause to select either one of the records from the pair or a combined record of the records forming the pair.

Implications of Skewed Datasets for Join: Skewed Datasets, if not handled appropriately, can lead to stragglers in the Join stage (Read this linked story to know more about Stragglers). This brings down the overall execution efficiency of the Spark job. Also, skewed datasets can cause memory overruns on certain executors leading to the failure of the Spark job. Therefore, it is important to identify and address Join-based stages where large skewed datasets are involved.

Techniques to Address Skewed Joins: Until now you must have seen a lot of scattered literature to handle skewed Joins but most of these emphasize 1 or 2 techniques and describe briefly the details and limitations involved. Considering this scattered description, this particular story is an attempt to provide you with a complete and comprehensive list of five important techniques to handle skewed Joins in every possible scenario:

In ‘Broadcast Hash’ join, either the left or the right input dataset is broadcasted to the executor. ‘Broadcast Hash’ join is immune to skewed input dataset(s). This is due to the fact that partitioning, in accordance with ‘Join Keys’, is not mandatory on the left and the right dataset. Here, one of the datasets is broadcasted while the other can be appropriately partitioned in a suitable manner to achieve uniform parallelism of any scale.

One can also use broadcast hints in the SQL queries on either of the input datasets based on the Join type to force Spark to use ‘Broadcast Hash Join’ irrespective of ‘spark.sql.autoBroadcastJoinThreshold’ value.

Therefore, if one could afford memory for the executors, ‘Broadcast Hash’ join should be adopted for faster execution of skewed join. However here are some salient points that need to be considered while planning to use this fastest method:

‘Iterative Broadcast’ technique is an adaption of the ‘Broadcast Hash’ join in order to handle larger skewed datasets. It is useful in situations where either of the input datasets cannot be broadcasted to executors. This may happen due to the constraints on the executor memory limits.

In order to deal with such scenarios, the ‘Iterative Broadcast’ technique breaks downs one of the input data sets (preferably the smaller one) into one or smaller chunks thereby ensuring that each of the resulting chunks can be easily broadcasted. These smaller chunks are then joined one by one with the other unbroken input dataset using the standard ‘Broadcast Hash’ Join. Outputs from these multiple joins are finally combined together using the ‘Union’ operator to produce the final output.

One of the ways in which a Dataset can be broken into smaller chunks is to assign a random number out of the desired number of chunks to each record of the Dataset in a newly added column, ‘chunkId’. Once this new column is ready, a for loop is initiated to iterate on chunk numbers. For each iteration, firstly the records are filtered on the ‘chunkId’ column corresponding to the current iteration chunk number. The filtered dataset, in each iteration, is then joined with the unbroken other input dataset using the standard ‘Broadcast Hash’ Join to get the partial joined output. The partial joined output is then combined with the previous partial joined output. After the loop is exited, one would get the overall output of the join operation of the two original datasets. This technique is shown below in Figure 1. 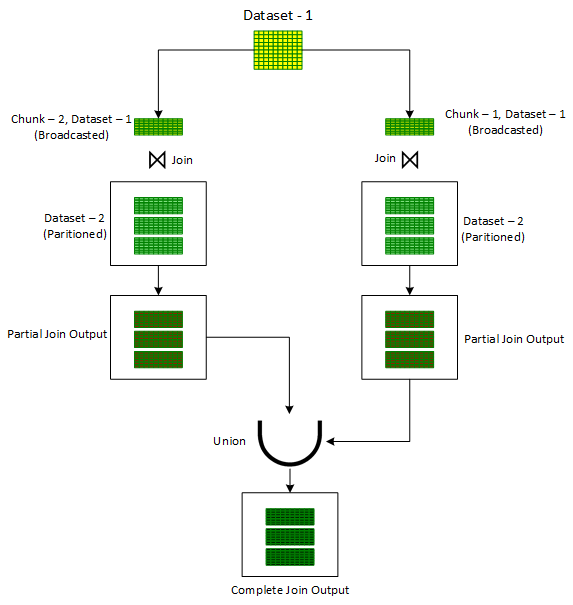 However, in contrast to ‘Broadcast Hash Join’, ‘Iterative Broadcast Join’ is limited to ‘Inner Joins’ only. It cannot handle Full Outer Joins, Left Joins and Right Joins. However, for ‘Inner Joins’, it can handle skewness on both the datasets.

‘Sort Merge’ approach is very robust in handling Joins in case of resource constraints. Extending the same, the salted version of ‘Sort Merge ’ can be used very effectively when one wants to join a large skewed dataset with a smaller non-skewed dataset but there are constraints on the executor’s memory.

Additionally, the Salted Sort Merge version can also be used to perform Left Join of smaller non-skewed datasets with the larger skewed dataset which is not possible with Broadcast Hash Join even when the smaller dataset can be broadcasted to executors. However, to make sure that Sort Merge Join is selected by Spark, one has to turn off the ‘Broadcast Hash Join’ approach. This can be done by setting ‘spark.sql.autoBroadcastJoinThreshold’ to -1.

The working of ‘Salted Sort Merge’ Join is kind of similar to ‘Iterative Broadcast Hash’ Join. An additional column ‘salt key’ is introduced in one of the skewed input datasets. After this, for every record, a number is randomly assigned from a selected range of salt key values for the ‘salt key’ column. 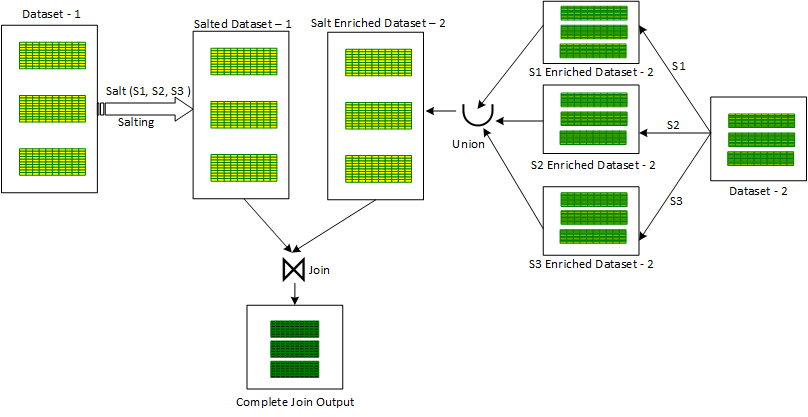 Figure 2: Implementing Salted Sorted Merge Join
Yet another alternative approach also exists for the ‘Salted Sort Merge’ approach. In this approach, after salting the skewed input dataset with the additional ‘salt key’ column, a ‘salt’ column is also introduced in the unsalted non-skewed dataset. The ‘salt’ column contains a fixed value (across all records) equal to an array made up of all values of salt keys in the earlier selected range. Afterward, this dataset is then exploded on the ‘salt’ column. The exploded dataset is then joined with the earlier salted skewed input dataset with an additional join condition on the equality of ‘salt’ and ‘salt key’ to produce the final joined output.

AQE is a suite of runtime optimization features that is now enabled by default from Spark 3.0. One of the key features of this suite pack is the capability to automatically optimize Joins for skewed Datasets.

AQE performs this optimization generally for ‘Sort Merge Joins’ of a skewed dataset with a non- skewed dataset. AQE operates at the partitioning step of a Sort Merge Join where the two input Datasets are firstly partitioned based on the corresponding Join Key. After the shuffle blocks are written by the MapTasks during partitioning, Spark Execution Engine gets stats on the size of each shuffled partition. With these stats available from Spark Execution Engine, AQE can determine, in tandem with certain configurable parameters, if certain partitions are skewed or not. In case certain partitions are found as skewed, AQE breaks down these partitions into smaller partitions. This breakdown is controlled by a set of configurable parameters. The smaller partitions resulting from the breakdown of a bigger skewed partition are then joined with a copy of the corresponding partition of the other non-skewed input dataset. The process is shown below in Figure 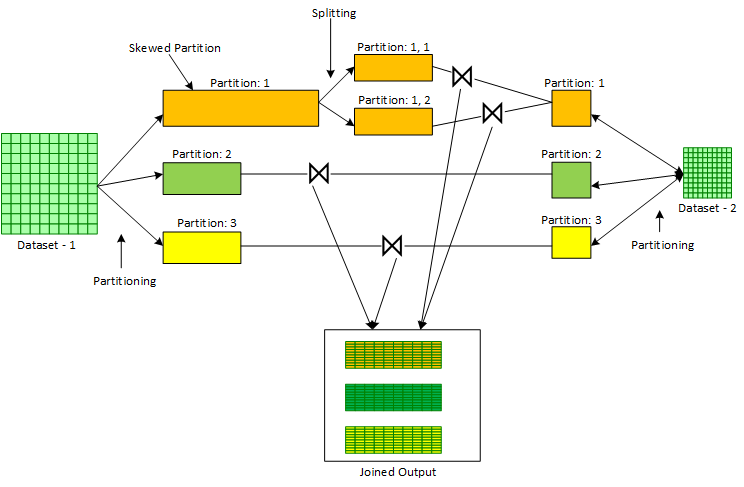 Following are the config parameters that affect the skewed join optimization feature in AQE:

“spark.sql.adaptive.skewJoin.enabled”: This boolean parameter controls whether skewed join optimization is turned on or off. The default value is true.

“spark.sql.adaptive.skewJoin.skewedPartitionFactor”: This integer parameter controls the interpretation of a skewed partition. The default value is 5.

“spark.sql.adaptive.skewJoin.skewedPartitionThresholdInBytes”: This parameter in MBs also controls the interpretation of a skewed partition. The default value is 256 MB.

AQE like ‘Broadcast Hash Join’ and ‘Salted Sort Merge Join’ cannot handle ‘Full Outer Join’. Also, it cannot handle skewedness on both the input dataset. Therefore, as in case of ‘Salted Sorted Merge Join’, AQE can handle skew only in the left dataset in the Left Joins category (Outer, Semi and Anti) and skew in the right dataset in the Right Joins category.

‘Broadcast MapPartitions Join’ is the only mechanism to fasten a skewed ‘Full Outer Join’ between a large skewed dataset and a smaller non-skewed dataset. In this approach, the smaller of the two input datasets are broadcasted to executors while the Join logic is manually provisioned in the ‘MapPartitions’ transformation which is invoked on the larger non-broadcasted dataset.

Although ‘Broadcast MapPartitions Join’ supports all type of Joins and can handle skew in either or both of the dataset, the only limitation is that it requires considerable memory on executors. The larger executor memory is required to broadcast one of the smaller input dataset, and to support intermediate in-memory collection for manual Join provision.

In case you would like to have code snippets related to each of these techniques, you could reach out to me on LinkedIn.

Published at DZone with permission of Ajay Gupta. See the original article here.