After cloud, Robotic Process Automation (RPA) is the next buzz word, an emerging trend and a new breed of technology gaining momentum in the era of Machine Learning and Artificial Intelligence.

As per the Forrester Wave, Q1 2017 report: "Enterprises are under immense pressure to digitize operations, and they see a future where routine operations are fully automated. These enterprises see RPA as part of their automation strategy."

Forrester estimates that, by 2021, there will be over 4 million robots doing office, administrative, sales, and related tasks. Management of robots and their governance will be a growing issue and advanced analytics will aggravate these concerns as vendors push RPA to greater value.

BPA/BPM platforms allow teams to create process automation workflows which can integrate with multiple and diversified systems that exchange information and handle scenarios encompassing automation of certain human tasks. The major drawback is that these activities would require API or database access on those systems, involves coding, development and are time consuming. What if the systems to be connected doesn’t support any API integration, is outside the network or customer is not willing to share or give access to API’s/Database.

Here is where RPA Platforms surpass; as they have a very sophisticated framework to configure software robots to intelligently capture and execute repeatable tasks non-programmatically that previously required a human to perform.

The good news is – RPA is completely code-free and platform agnostic. 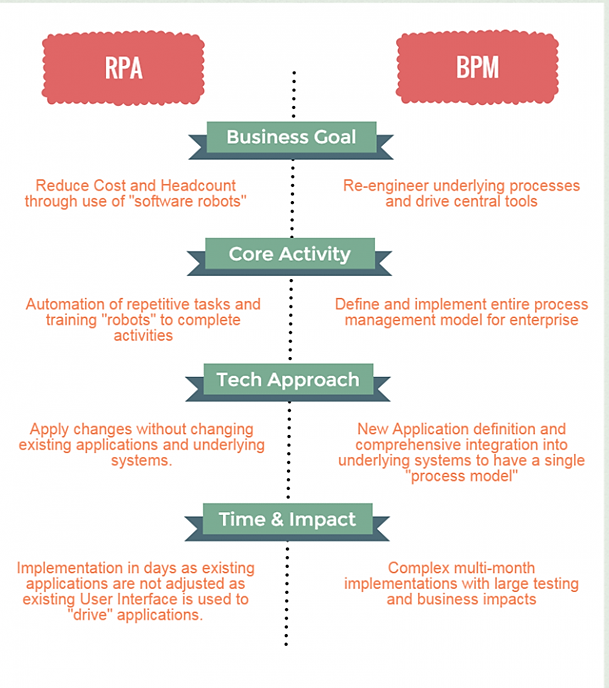 Below is a simple and sample enterprise scenario of providing role based user access to Application manually and using BPA & RPA process.

A typical workflow would be as follows:

Invoking similar process via scripted business process automation would require the creation of a new process flow involving backend access via API’s/DB calls activated from an Automation Queue. These activities would require a service account or DB credentials, which has to be encrypted & persisted for performing respective actions on the system. The custom process workflow implementation might have to go through the Application Development Lifecycle.

On the contrast, RPA tools help the support teams to record various routine activities performed (Capture and Reply). Industry leading RPA tools like Automation Anywhere, UiPath, Blue Prism have inbuilt Studio Designers to create automation models visually without any code. The complete manual operations can be recorded, scheduled and triggered by a bot as required. The models can be built with ease, in lesser duration and with zero coding.

So which model should one select?

Well, the response depends on the objective of the automation project to be built. If the intent is automating major and repetitive human activities, then RPA will be the better choice and on the other hand, if the automation process flows to be implemented are complex, involves streamlining of multiple systems and platforms, BPM Software would be the go-to platform.