As earlier mentioned, SimpleHTTPOperator is used to call an API by sending an HTTP request. The example in the article is going to invoke an open source weather API, which is a GET call. 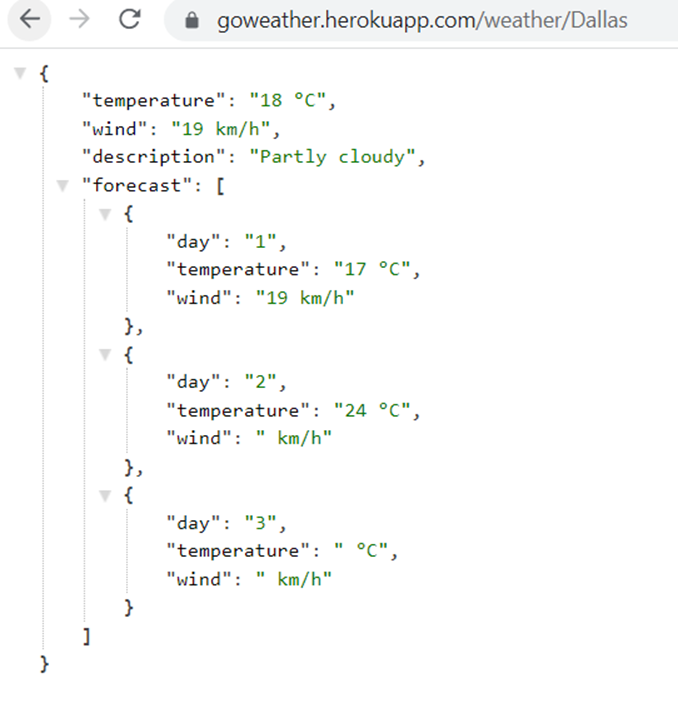 One can see in the image {city} is replaced by a valid city “Dallas.” The response received is in JSON format, which explains the weather in Dallas. We are going to invoke the same request through SimpleHTTPOperator.

As we know, the first step of the workflow execution in Airflow is to create a DAG. Then, the Operator should be used for the task execution.

The DAG with the name “weatherServiceCall” is created with standard attributes like start_date and schedule_interval. The schedule_interval is defined using a cron-expression, which will invoke the service every 5 minutes.

Then the SimpleHTTPOperator task is created, which has the following attributes:

The “http_conn_id” reflects the HTTP connection/REST endpoint details for the SimpleHTTPOperator. In our example, we have used a string “weather_api” which is configured through the Airflow UI. On the Airflow UI, go to the Admin section and click on Connections.

On the "Add Connection" screen, configure the details such as Conn Id (where the name “weather_api” is configured), Conn Type (which is HTTP), and the Host details.

Click on Save, and that’s it: http_conn_id is configured!

In the example, we have used the Python function “handle_response” for handling the HTTP response. The implementation of the function is:

Implementation is straightforward. In the case the status code is 200, we are returning True. Otherwise, we would return False.

The logs showcase that the response received is successful, and the print statement of the handle_response function is displayed.

The article explains in detail how to call a REST service using SimpleHTTPOperator. We also covered the configuration of http_conn_id through Airflow UI as well as showcased the output of DAG execution.