Getting Started With CI/CD Pipeline Security

The increasingly distributed nature of CI/CD frameworks has made organizations more vulnerable to attacks, which can range from threats to supply chains and servers to exploitations of the application code itself. In this Refcard, you'll learn about the primary focus areas of CI/CD pipeline security, review common pipeline threats and security challenges, as well as walk through seven steps to get started with securing your pipelines.

A continuous integration/continuous delivery (CI/CD) pipeline is an agile workflow that automates the build, test, and deploy cycles of application delivery. While automated deployment cycles enable developers to release new features and updates rapidly, CI/CD pipelines are commonly targeted by attackers who are looking to exploit vulnerabilities and inject malicious code into application workflows. A compromised pipeline often has severe consequences, such as an attacker gaining access to sensitive data and even controlling the release of new software versions.

In this Refcard, we discuss the key aspects and challenges of securing CI/CD pipelines as well as the fundamental steps to administer security on CI/CD pipelines. 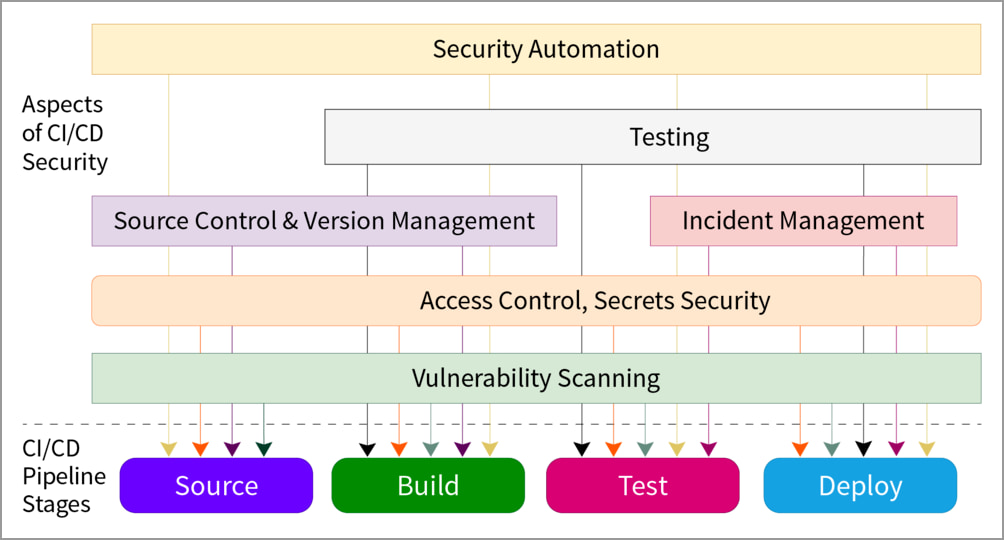 It is also important to employ the appropriate testing approaches that inspect flaws across various stages of the CI/CD pipeline. These include:

By automating the processes of building, testing, and deploying code, you can ensure that only approved code is deployed to production. Automated enforcement of security controls eliminates errors associated with the manual execution of repetitive tasks while making it easier to track changes and roll back if necessary.

One of the most powerful ways of enforcing code integrity is to use source control systems that enable enterprise teams to securely manage code changes, collaborate with cross-functional teams, and resolve conflicts in code before committing changes. This approach also helps prevent accidental or malicious changes from being introduced into the codebase, which could potentially break the build or cause other problems downstream.

Also commonly referred to as version control, source control involves the configuration of access permissions to the codebase, ensuring only the approved contributors are allowed to make code changes. This guarantees that only authorized users have access to the codebase and that all changes are tracked and audited. Additionally, by using a centralized source control repository, you can more easily automate code reviews and roll back changes if something does go wrong.

Incidents are unplanned events that disrupt normal operations by compromising the integrity of a system. In the context of CI/CD pipelines, incidents can range from simple build failures to more complex security breaches. Consequently, it's essential to formulate an incident management process that encompasses various procedures and tools to manage and respond to security events.

While the primary purpose of an incident management framework is to reduce the impact of an event, it also helps alleviate the future occurrence of similar incidents by helping recognize identical patterns and fine-tuning alerting systems for expedited response. A typical approach is also to hard-code incident response plans into workflow tools, allowing for the automatic remediation of CI/CD security threats.

There are a few key things to keep in mind when managing secrets for CI/CD pipelines:

Automated vulnerability scanning helps teams enforce a shift-left approach for security by identifying and remediating threats from early stages of a development cycle. Remediating vulnerabilities typically involves detecting a flaw, assessing its impact and severity, deploying a fix, and performing a determinative scan to ensure the flaw no longer exists. Since CI/CD pipelines are composed of numerous components and dependencies, vulnerability scanning for CI/CD is often broken down into:

To ensure all misconfigurations are appropriately attributed with their impacts, a common practice is also to leverage databases of known weaknesses. Some popular vulnerability databases include:

One of the most important aspects of CI/CD security is making sure all cluster endpoints are secured. Access control mechanisms help mitigate the risk of data breaches by determining who has the privileges to access specific data and resources of a pipeline. Administering stricter policies requires users to verify their identity before they are allowed to access sensitive information. Beyond verifying a user's identity, access control policies also determine the allowed actions by defining permissions granted for each user.

As per OWASP, although there are emerging practices and tools to avert security incidents, attackers continue to adapt novel techniques that exploit the distributed complexity of a CI/CD framework. Some common security threats of CI/CD pipelines include:

Securing CI/CD is a complex practice that encompasses the identification, remediation, and prevention of security risks across each stage of a pipeline. While building a robust security posture is the fundamental objective of the practice, the framework should also continue to maintain the agility and pace of release cycles. As a result, when compared to securing legacy frameworks, there are a number of challenges with administering security on CI/CD pipelines, including:

Apart from protecting data and code from potential breaches that traverse through various endpoints of the pipeline, administering security on CI/CD pipelines also helps maintain compliance and prevent accidental issues such as data loss or corruption. In the following section, we discuss the steps for effective CI/CD security implementation and open-source tools to simplify the process.

While the specifics of a CI/CD pipeline security strategy will differ by use case, the process typically follows a similar workflow.

The first step toward securing a pipeline is to control and organize access privileges. This essentially requires policy enforcement that restricts every user of the organization to possess similar privileges for accessing tools and resources within the CI/CD pipeline. Additionally, those with permissions to access the pipeline should not be assigned default permissions to view all resources and data within the pipeline.

Since a code repository acts as the central storage, review, and management system of the code used within a DevOps pipeline, securing repos is the next step that requires key consideration. Public code repos, or those lacking secure controls, are often targets of malicious exploits that lead to code tampering and loss of code integrity.

Approaches to securing code repositories include:

Hard-coded passwords and secrets are common attack targets that lead to data breaches and malicious access of pipeline resources. Attackers typically target source codes within public repos and identify hard-coded credentials through code scanning, guessing, and learning. As a recommended practice, security admins should implement policies to regulate the usage of hard-coded secrets into application code. If secrets are to be parsed, they should be included as variables in a .gitignore file, which keeps them from being committed into the repository.

For instance, before distributing secrets in a Kubernetes cluster, secrets should first be encrypted at rest and then stored in the ETCD server.

A conventional approach for achieving this is by encoding the secrets in Base64 format as shown:

And then, defining the secrets:

Following the above, you can now create the secret using the kubectl create command:

Once code repositories are secure and secrets are safely managed, developers and security teams should collectively ensure the source code is free of any vulnerabilities. This is accomplished through a combination of tests that are deployed at each layer of CI/CD workflows to automatically notify security teams upon detecting pipeline vulnerabilities. 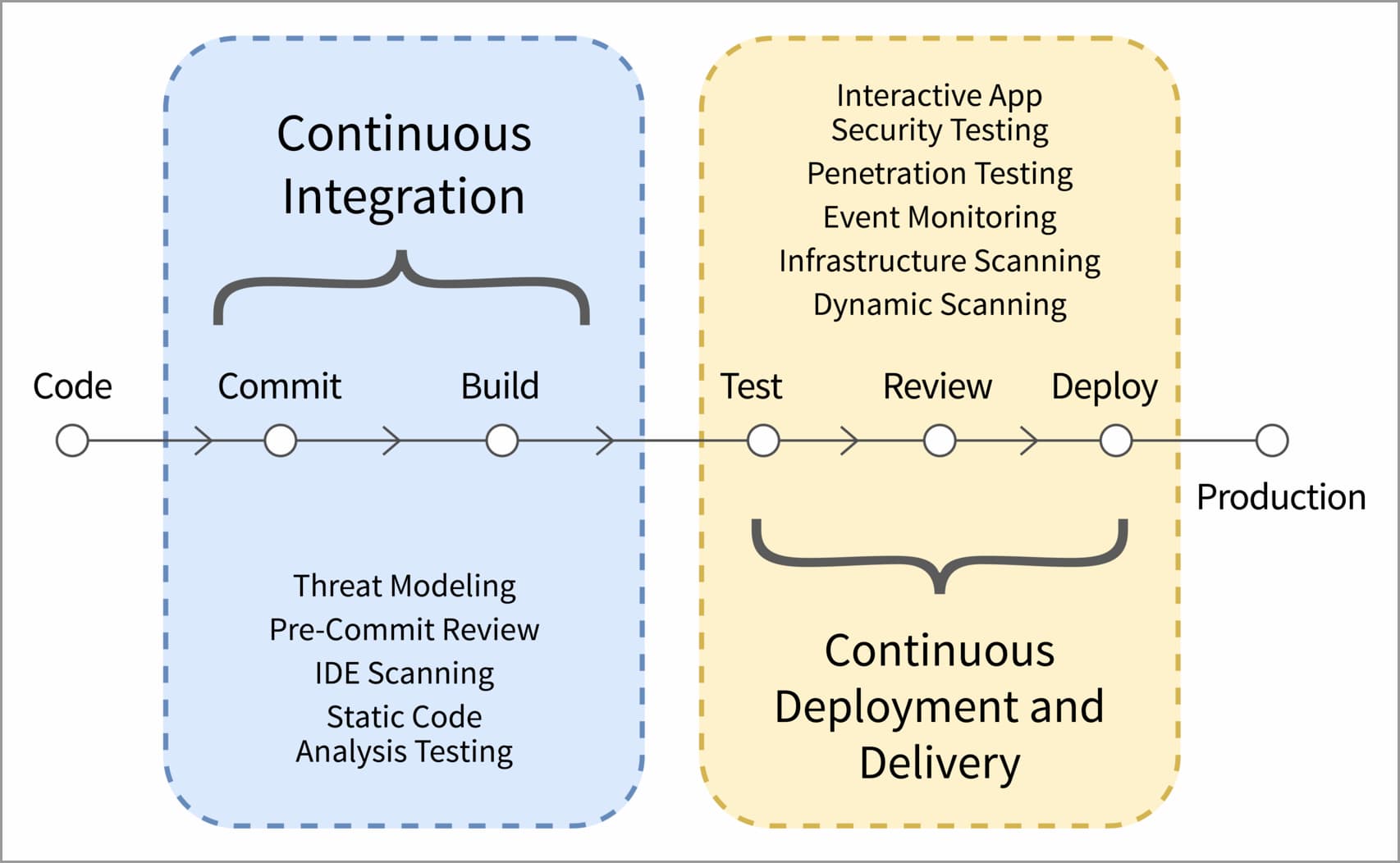 Automated tests can also be combined with automated remediation tools that use the findings of security checks to safeguard pull requests from attack vectors. In production-grade pipelines, a common approach is also to engage external penetration testers to provide an unbiased view of the pipeline's security posture and help identify flaws that may have been missed by automated tests.

5. Use Rollbacks to Enforce Security in Production Pipelines

Once policies are framed to secure pipelines, the next stage focuses on minimizing the consequences of a successful attack. This requires the formulation of controls that help revert to earlier, stable versions of an application if the current one is compromised. The ability to quickly roll back an insecure application version also helps reduce application downtimes while expediting patch cycles for faster remediation.

Incident response plans strengthen a continuous testing process by shortening the feedback loop of identifying and addressing CI/CD security threats. Once potential security threats have been mapped with their respective attack vectors, the incident response plan should outline tools and processes to be used to restore normal operations. Besides reducing the response time for a security event, response plans should also tag a summary of related non-critical incidents that may signal potential issues within the application, thereby helping developers to fine-tune their code for security and performance.

These tools aggregate and analyze telemetry data from different resources of the CI/CD pipeline. The composite data is then stored, normalized, and analyzed for threat detection and trend analysis. When configuring an SIEM solution, security testers and developers should also integrate a continuous testing and monitoring framework for faster discovery of security breaches and remediation.

Securing a CI/CD pipeline is a multi-pronged process that requires an in-depth understanding of the tech stack's core aspects, changing threat patterns, and inherent vulnerabilities. Out of the number of tools available, below is a list of popular open-source tools that are free, simplify the implementation of CI/CD security, and offer comprehensive hardening solutions.

SonarQube is a static application security testing (SAST) tool that tests applications against the most critical risk categories within application code. The tool performs a static analysis of pull requests to ensure that every piece of code entering the pipeline is free of threats found on the OWASP Top 10 list of vulnerabilities.

To help track unvalidated user inputs from the point of entry to the stage of code execution that enables a compromise, the tool relies on a taint analysis mechanism to detect malicious inputs flowing into the DevOps workflow. Besides this, the tool also offers an issue visualizer that enables closer inspection of how vulnerabilities flow within the pipeline while offering guidance to identify the root cause and enforce stricter controls.

OWASP Threat Dragon is a threat modeling tool that helps you record possible threats within DevOps pipelines and remediate them using threat model diagrams. The tool follows the principles and values of the OWASP's threat modeling manifesto and implements a rule engine that auto-generates threats in the pipeline and their possible mitigations. Installed as a desktop or web application, the tool offers a simple command-line workflow for quick threat modeling.

Unlike other tools, the ELK Stack offers a centralized platform that helps inspect issues with other core indicators of the system. With ELK Stack's support of code audits, you can also identify vulnerabilities and fix them proactively before they lead to configuration conflicts or compliance issues.

Google's State of DevOps 2022 report suggests that using continuous integration and delivery systems for production releases is one of the most commonly established practices in modern application delivery. With increasing adoption of DevOps practices, the foundational security of CI/CD pipelines has come under greater scrutiny. That's because these pipelines are often the gateway to an organization's codebase and deployments, making them a common target for attackers.

Although the report also offers early evidence that pre-deployment security scanning is effective at finding vulnerable dependencies, traditional security measures to administer security on CI/CD-based workflows are often insufficient. Consequently, a DevOps practice relies on the implementation of granular policies across every stage of pipelines for comprehensive security.